A while ago I invited my mate Angela to join me on an exhausting trek up steep cliffs and across gruelling terrain.  I explained that the expedition would be arduous and only the fittest survive…….

Not quite true, but if you see her other half, that’s what you have to tell him!
In reality, Angela joined me for this walk around Sutton Bank and ,  (map at the end).   I was testing out my new GPS, which of course meant we went the wrong way, and Angela was testing out whether or not she should walk with me again, which of course meant we went the wrong way.
Starting at the visitors centre we followed the Cleveland Way South along the edge of the cliff.  By 'eck it was cold up there!
We passed the Gliding Club on the left, and we watched a “tug” pull a glider into the air.  Depending on conditions and wind direction, it’s possible to watch "winch launches" of gliders straight over the edge of  the cliff.   In summer, the sky is full of silent aircraft which you watch, mesmerized, for hours.
Walking on, we passed just over the top of the White Horse then turned directly right to go down the bank where out of the wind it was much warmer.  I took a picture of the White Horse at the car park on the way down, but the White Horse is designed to be seen from a distance and trying to take photo’s close up just doesn’t work.  Hence my headless version.
We walked on through the woods, so busy chatting we missed the turn off towards Hood Grange. My GPS told me we were going the wrong way, but I still haven’t worked all the buttons out, and couldn’t get the screen to tell me the right way. Luckily a woman on a horse that wasn’t headless provided directions and we were off again.
Angela, whilst fit, active and very used to climbing, abseiling, quad biking, dry stone wall building and wood clearing, is not used to walking across farmers fields.  She reminded me of the first time I went out and the finger posts pointed straight through a field of wheat or potatoes.  It felt like I was walking in someone’s back garden.  I still feel like this, and take care not to damage the farmers property.
The landowner at Hood Grange obviously knows how to look after walkers though, he’d worked his field to leave a raised unploughed path straight through the middle for us to walk on, and there is work going  to improve the right of way (I think) around the buildings. It will make it feel less like we are walking through his back garden in future.
So on, across the A170, through the fields, (where we stopped for a quick bite) and on to .
Our plan was to walk along the west side of the lake and then on to Southwood Lodge, but we were talking again, and didn’t check the map, or the GPS......  Once we’d completed the full circle of the lake, (which was lovely, I like bullrushes), we turned back on ourselves and headed towards Southwood Lodge.  There are loads of paths here, and we never actually found the right one, but we did finally reach the intended route to the top of the bank.
I had warned my friend that it would be steep, and that we would huff and puff all the way up.  And it was, and we did.
But it's worth it. One for the sense of achievement, and secondly the views from the top of the Whitestone Cliff are awesome.  It’s a shame the weather wasn’t a little better, but we got some great pictures of the autumn colours around .
In no time at all we were back at the visitors centre, which I would recommend to anyone.  There’s educational stuff for kids and adults alike, a  little tourist gift ship, and best of all, a brilliant coffee shop with goooooorgeous cakes.  (Sorry, no beer folks).
An enjoyable day at the end of which, I’ve learnt a new walking route and how not to use my GPS.  The last question is, will Angela do it again……….? 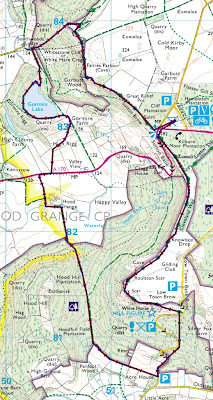 Our intended route, around 6½ miles, although we actually walked over 7