Goathland or “How to pack a lot into a short walk”.

The Goathland Waterfalls Walk is on the Walking Englishman's site, and after watching a couple of the video’s, Peter said we should go see.  I thought “it’s a long drive for a 6 mile walk…?”  Peter wanted to go, so off we went.
If comparing, please note - Mike B started at the Mallyan Spout Hotel,  (we should've done that too), we started past the cattle grid at the bridge over West Beck.  Mike went clockwise around the route.  We went anti-clockwise.
So we started at the bridge, and immediately the walk became wonderful.  West Beck is a fantastic rugged little stream.  We walked alongside until Mallyan Spout and loved every minute of it.
It’s not easy.  We spent a lot of time finding footing where we wouldn’t slip off a rock or sink deep into mud.  As well as a fair amount of clambering around some of the bigger stones.  But West Beck is enchanting.  Bubbling and chuckling around the moss covered rocks. Rushing and gushing over this bit, slowing and widening into smooth, pools at that bit.  I couldn’t stop taking photographs.
Then we came to Mallyan Spout.  How lovely is that little waterfall?  As delightful as the beck I think.  Peter has managed to capture it on film, so much better than my photographs.  I will link his video into this blog as soon as it’s ready.
From Mallyan spout there is a little climb up steps, a walk alongside the wood and steps down again heading for Beck Hole.  A big thank you to all volunteers who repair and remake  paths, such as the guys working there that day.
We really appreciate it. 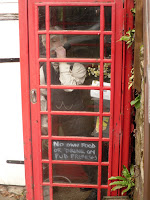 Peter says Beck Hole always reminds him of Postman Pat.  I can sort of see why.  No chance of making a phone call from the telephone booth though, it’s permanently engaged.
From Beck Hole we were supposed to make our way west and very briefly alongside the railway track. Peter mentioned that we might be lucky enough to see one of the steam trains. To increase our chances we decided to take a short break and eat, and guess what?   We heard it coming and, once again, Peter has some awesome video. Wonderful.
Now onwards and westward. At this point:
We’ve worked out that we have to walk for a short period alongside the railway track.
Mike B, in one of his videos talks about a “scary path” which we knew was here somewhere.  Mike was walking in the opposite direction.
Peter had it in mind that we should see Thomoson Foss, which was very close by.
All these things came together at the fork in the path yards away from where we saw the train.
The “path” on the left side was really poor, in fact there was a large hole directly in front of us, it didn’t look passable, and we weren’t even sure it was a path. The path on the right went down towards the river, and therefore the waterfall. So we went right.
We followed Eller Beck which is almost as charming as West Beck.  Again we had to avoid mud and slippery rocks, but we were joined by a heron which flew just ahead of us to the Foss until he was perched on rock to the side of the waterfall.  He stayed there some time posing for us.  I took loads of photos whilst Peter filmed.  Lovely.
At Thomason Foss we realised we could not go onwards.  There was no way past the waterfall,  so we turned back the way we came and tried to puzzle out how to get to the other (north) side of the railway line. That left fork was obviously the “scary path”, and we decided we shouldn’t use it.  So we went back to cross at the road bridge.  From there we walked a little way along the north side of the railway until we got to the point where the track crosses a meander in Eller Beck.
We had a good look around and worked out this is where Mike went under the railway to Thomason Foss. Peter and I agree that the “scary path” in Mike B’s video is now a “positively dangerous path” and would advise others to avoid it.
On the plus side though, there’s another waterfall on the north side of the railway line. We didn’t get close, although there is a path, because we had spent so long exploring we were beginning to run out of time.


We walked on following the railway line almost, to Goathland Railway Station. Lovely views of the moors until we reached the station. This time we managed to time it to see the both steam engines roll in.  Just wonderful.


We spent quite a while watching trains, so now we needed to hurry back to the car.  We decided to cut the last part of the walk short, and scurry along the road through Goathland.
The few words I have to say about this village are:
How pretty?
I have never known another village where the houses are so far apart.
The sheep grazing all through the village are cool.
Helicopter?
We got back to the car about 5
hours after we started out.  We walked just less than 6 miles, but what a fantastic afternoon.  I feel like we packed a massive amount in that day.  Thinking back to the start of the day - “It’s a long drive for a 6 mile walk…?”  Never!
This is a long blog entry. We packed a lot into a little six mile walk.