I’ve been looking forward to this, because it’s been ages since Peter and I have been out walking.  The weather has been brilliant all week, but the forecast wasn’t good, (I told Peter it said it would rain).  Nevertheless, we were still hoping for a warm dry day up a hill.

As we were driving to Clapham we hit a heavy downpour.  Not good!  I said we could walk next weekend.  Peter said it would blow over.  It stopped. So we parked outside Clapham hall, donned our boots and rucksacks and started off.
It was a good start.  We followed the top path to Clapdale Farm (rather than pay the 60p each to walk along the privately owned Clapdale Drive lower down).  From there we dropped down the hill and walked along the track to Ingleborough Cave.


Just past it is the head of Clapham Beck in the form of a spring that pours forth from a cave.  Nice.

We continued along the track to Trow Gill.  On the photo’s, it looks more than it is.  It’s a pleasant place with cliff sides, a cave and the Gill itself which is easy to walk up.
Up through Trow Gill and on through a deep sided gulley to an open expanse of moorland and view of The Ingleboroughs.  Sadly, it started to rain at this point, that persistent type that isn’t a downpour, but gets you wet anyway.
We walked on to have a look at Gaping Gill, a very large hole in the ground into which falls Fell Beck.  As you can tell from the link, there are two occasions where common or garden non pot-holing folk can see inside.  I think I might do that next year.
From our vantage point we couldn’t really see down the hole, despite our best efforts, so we took the photographs we could and returned to our planned walk by crossing Fell Beck.
“Watch out!  It’s slippy!” yelled Peter as he nearly went over.  “OK” I said, and moved to cross at a different point.  Uh oh!
It was very slippery, and I landed very firmly on my bottom.  Peter came to rescue me.  He landed very firmly on his bottom too.  As we both sat there, bruised and confused in the beck, we burst out laughing.  But we realised that the longer we stayed, the wetter we’d get, so we very quickly got out!
So now I’m wet through to my knickers and all the way down the back of my legs.  Water is trickling into my boots.  Peter has a wet behind and it’s raining.  Do we go on?  Do we go home? We were midway between the car and Ingleborough. Based on the principle that if we kept moving, we’d keep warm and probably steam dry, we carried on.

The rain continued and got heavier.  As we started up the slope of little Ingleborough we discussed going back, but onward and upward, up to the top of Little Ingleborough we went. The path then levels out for a bit before you start climbing to the top of Ingleborough Peak itself.  The cloud base was sinking and the rain kept coming, but eventually we got there.  We walked across the very flat top to the weather shelter where I managed to get a photo of the summit cairn. We couldn’t see far but we did make out some of the surrounding hills as we paused for a well earned steak slice.
Now to go back.  Due to the now soaking wet nature of our attire we made the decision to curtail our original route, and leggit back as fast as possible. We belted off the top, down the side, and made short work of the route back to Gaping Gill across the moor.  And still it rained.  We walked past Fell Beck and continued back the way we’d come through Trow Gill.  Carefully this time, because it was wet and slippery.  On past Ingleborough Cave and then we chose the private track along Clapdale Drive, because there was no-one to collect the toll and it was quicker.  The rain continued. 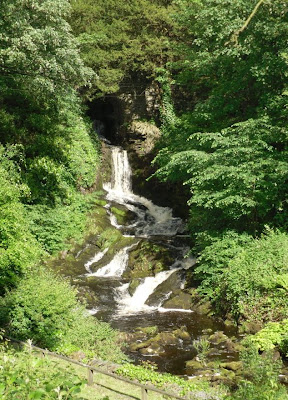 The private path comes out at Clapham next to a very pretty waterfall, which I think is manmade.  We’ve been here before and I have sunny day pictures.  We didn’t stop to admire this time though, it was still raining.
Finally we got back to the car.  Totally, totally, soaking wet but satisfied with our effort. Driving home past Ingleborough, we noticed the cloud base had sunk to cover the summit and we felt pleased we’d got up there earlier.
When we got home, Richmond was dry.  Now, three days later, we know that we must have found the wettest, rainiest patch in the whole of England to walk.  If we’d gone anywhere else, we’d have stayed dry. I suppose it’s all down to experience.  (And I did tell him it would rain).