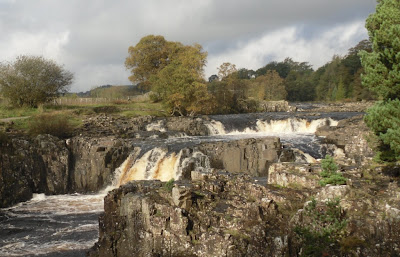 After a fantastic day in Swaledale on Saturday, I was expecting Sunday’s weather to be as glorious, and I was determined not to waste it.   Yvonne, (AKA Cheviot Stroller) was bulldozed into finding a route, (not strictly true, she was as keen to get out as I),  and found one of about 8 miles, starting with Low Force on the River Tees  (map at the end).  So we met up at Bowlees car park, and took the path through the tiny village towards Low Force and  Winch Bridge, 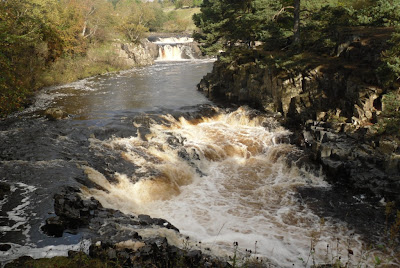 Low Force is quiet stunning.  There are four separate falls all in, and each of them quite mesmerizing. The might of all that water!  I personally loved the surrounding rockscape, created because the water is cutting through a layer of “igneous rock “ which was created by a lava flow millions of years ago.  When it cooled, the lava settled into all sorts of interesting pillars and crystalline type shapes. 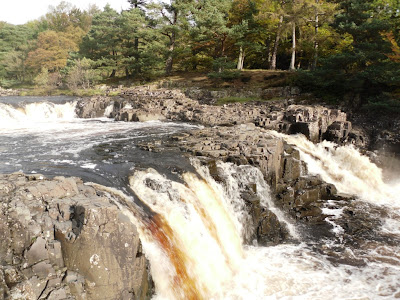 We crossed the disturbingly bouncy Winch Bridge to follow the Pennine way alongside the Tees towards High Force. 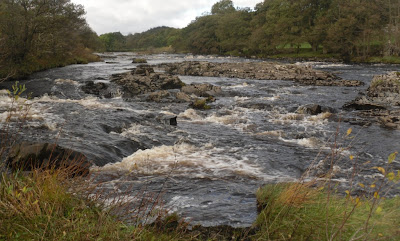 The river itself has its own rugged appeal.  The rocks and boulders are rough and craggy, refusing to be smoothed out by the flow of the river. Quite beguiling. 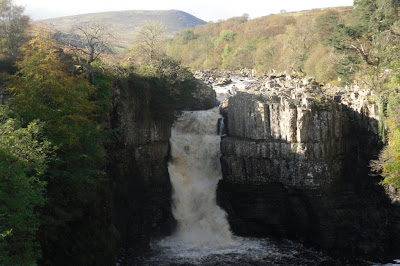 High Force is compelling viewing.  You just have to watch the water as it forces and gouges its way through the rock. 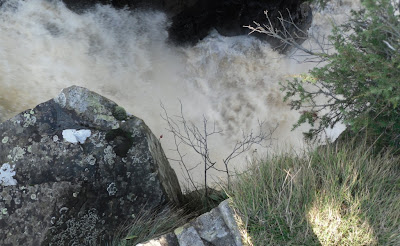 I tried to capture how perilous the falls were and the awesome power of the water in photos, but the pictures are a mere shadow of the real thing. 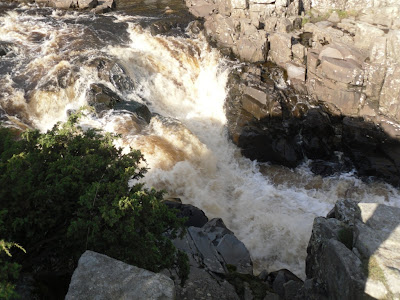 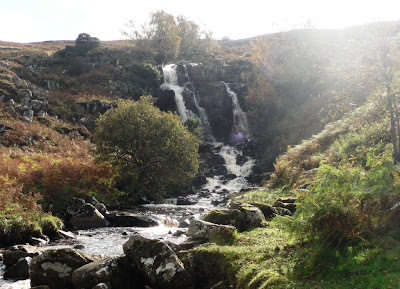 After spending some time at High Force, we carried on up river to a charming little waterfall, Bleabeck Force. 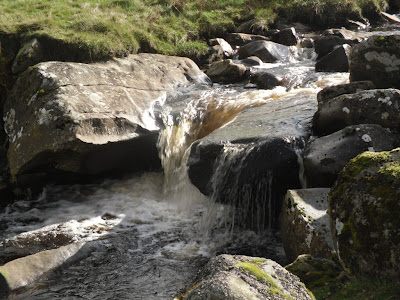 Very pretty.
We carried on upriver.  On our right, across the Tees is Dine Holm Scar, which is also made of the cooled lava or igneous rock, and which was being quarried.  Ahead and left are the steep Green Hill and Cronkley Scars.  Lovely. 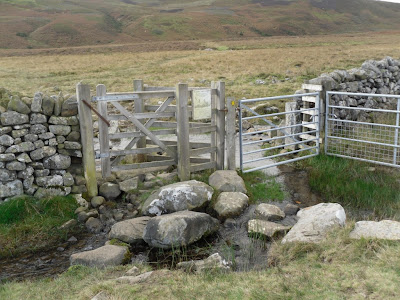 We turned south (ish), and away from the river at the point it turns north(ish), across some damp and squidgy grassland until we reached the wall with Fell Dike Sike on the other side.  Only a little beck, but it did require careful placement of the feet to remain dry.  Or in Yvonne’s case, walking sticks.
We walked a little further before turning east to start the way back. The damp and squidgy turned into wet and boggy.  So we were careful and picky to stop wet and soggy, (boots and feet that is). 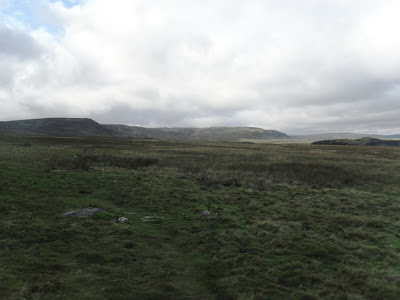 However, half way across this short stretch of boggy moor was Blea Beck, with its little stepping stone ford.  I have distinct memories of a very wet behind from a beck a lot shallower than this one and with  bigger stepping stones ……..
For anyone undecided about walking sticks…….. Buy them!  If only for keeping  your balance across half flooded, uneven stepping stones.  Because Yvonne is better organised than I, we were able to cross the beck using her sticks.  Of course, we wouldn’t have fallen in but the sticks gave us the confidence to cross 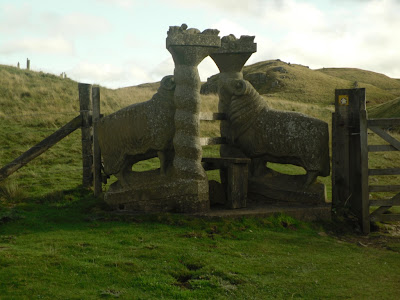 After that little adventure we reached the dirt track which would take us the rest of the way, through an awesome stile. 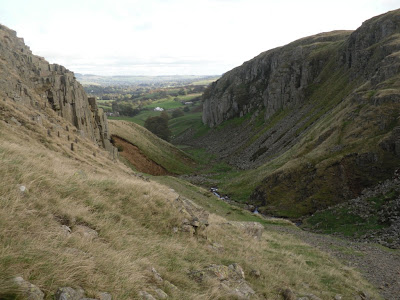 And then on through a tiny but impressive little gorge past Holwick Scar.
The very last part of the walk turns north through fields and back to the Winch Bridge, Low Force and our cars.
The weather hadn’t been quite as bright as it had the previous day, but it was another wonderful day in pleasant company.
Lurrrrvly