A walk in the North Pennine moorland from Stanhope

This was a test walk.  Neither I nor Yvonne (Cheviot Stroller) had been out this way before.  So I sort of cobbled together a route of what looked like interesting features and met Yvonne in the little town of Stanhope.  We parked at the Durham Dales Centre and quickly set off, aiming for the cave(s) on the wonderfully named Shittlehope Burn.  (Map at end as usual)


I was slightly disappointed in that we couldn’t really see any caves, just a hint of rocks where they might be.  There looked to be an interesting tunnel though, but because everywhere was wet, muddy and slippery we decided not to explore.
From there we muddled our way across the fields to the tumbledown farmhouse which would have been Ravensfield, and then up the steep side of Shittlehope Edge.


The paths here are not marked or very clear, and it was basically guesswork that got us to the Pit House.  We did unintentionally visit Roundhill Quarry on the way, which had its own charm.


We got to the Pit House from where we were supposed to follow the right of way south, down the hill and then come back up again on Intake Lane.  We decided to try and take a short cut straight across to the tantalisingly close satellite mast.  This meant walking across the disused mine workings, (curious ups, downs and gulleys in the field), and over a damaged stone wall to rejoin our path, but it did save us another uphill climb, (shortcut not recommended).


From the satellite mast, we walked north on a clearly defined and waterlogged track on the edge of Wolsingham Park Moor.  The moor is bleak with nothing but heather for miles, as well as loads of very noisy grouse. Apparently the gentry don’t shoot on Sundays, which is probably why we didn't see another soul up there.  Despite overcast skies, the views were fantastic and we could see right across Weardale to the west and to the wind farm on the other side of Tow Law to the east.  Awesome.
We passed Fatherley Hill, which is charming, and the mast at Collier Law to reach The Sandpit.  An odd place.  Obviously a disused sandstone quarry, it has its own alien landscape.
From there we headed for Weatherhill Engine, an old railway station described here:  Disused Stations Stanhope,  but any evidence of it is long since gone.  We crossed the road here, and found the finger post pointing to the public footpath that would take us down the bank to a gully and then on to the disused drift mine.  Finger post…… Yes. Path…..  No.  So we headed in the right general direction across the heather until we met up with our next path.


Then it was down to the disused drift mine, which I think might have closed in 2002.  The buildings are relatively modern.  I liked it here, shades of Jurassic Park 3, and surrounded by autumn trees.  Lurrrrvvly.


Onwards to meet up with Reahope Burn.  We followed it until Stanhope Burn which we walked alongside until we got to Stanhope. The sun was out in full force now, showing up the glorious colours of the woods we were walking through. This was a really delightful stretch of the walk, thoroughly enjoyed by us both in the low afternoon sun.


Then we were back in Stanhope and at our cars.  We’d walked just under 10 miles and explored an area new to us both.  Definitely some highlights on the walk, not least the views and the bleakness on the edge of Wolsingham Park Moor, as well as walking along the burns back into Stanhope.  Wonderful.  Thank you to Yvonne for keeping me company and steering both me and my GPS right as we walked round. 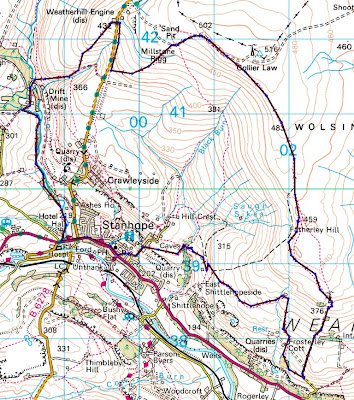 Our planned route of 10.2 miles. Except we didn't follow it entirely.