To be honest, we've been waiting for months for the decent weather to be around at the same time as us so we can go climb a mountain in the Lake District, in the sunshine. And finally we got what we wanted, the only drawback being that it was Easter Bank Holiday Weekend.

But we hadn't booked anywhere to stay. We had been waiting to make sure we had decent weather, and once the Met Office promised that, about four days before the bank holiday weekend, we found that trying to book into any one of the hundreds of Lake District campsites was completely useless. They were all full.

Actually, it was nearly empty. A great big field with hardly anyone on it. Flamin' Awesome!
OK, so the facilities weren't the best.  No shop, a single shower in not much more than a cupboard and a not very flat field. But it was EMPTY during the bank holiday weekend. We drove past campsite after campsite filled to the rafters with kids and campervans, dogs people and tents. Then we got to the peace and quiet of ours. Bliss.

And not only that, it was the starting point of our first walk up Barton Fell. Well, that would be cos Peter worked out a walk using the campsite as the starting point, but what a coincidence eh?
So we set off from the Cross Dormont campsite and walked on past Seat Farm and Crook-a-dyke, heading for Thwaitehill and Sharrow Cottages. Our plan was to start uphill from Sharrow Cottages, but the thing was, we came to a permissive path that directly headed uphill, and we took it.

Half an hour or so (make that even more of the so) later, we were up Lock Bank near the Reservoir. Point to note...... The Reservoir is underground, which is why you cannot see it, either marked out on the map, or in the landscape. What you can see is shown in the fotie.
Anyway, our planned route was to follow the path along and then switch back to get up to White Knott. Or we could take Peter's preferred route which is always the shortest. We found another path going straight up, which is of course what we did.
So we reached White Knott glowing red and sounding like overcharged steam trains. But from there it was a nice gentle slope along Barton Fell to the Cairn at Arthur's Pike. (I like that name). Easy Peasy! And of course the views are wonderful.
Next we were to make our way to Bonscale Pike and Bonscale Tower following the paths on the ground as they are on the map, but............. What is it about us that means we always seem to wander off paths. We did find our way to the next landmarks, but not by following a well trodden route. We meandered a little. (Or maybe a lot).
Swarth Fell and White Knotts next. (Note the 's' on White Knotts, it's a different place than White Knott).
Then we had to make our way down to Mellguards. If this part of the walk looks steep on a map, it's because it is. Steep I mean. It hurts your knees and forces your toes into the front of your boots with the slope. Ow. Ow. Ow!
And finally, the flat (Phew! What a relief.) walk along the shore of Ullswater back to the campsite. 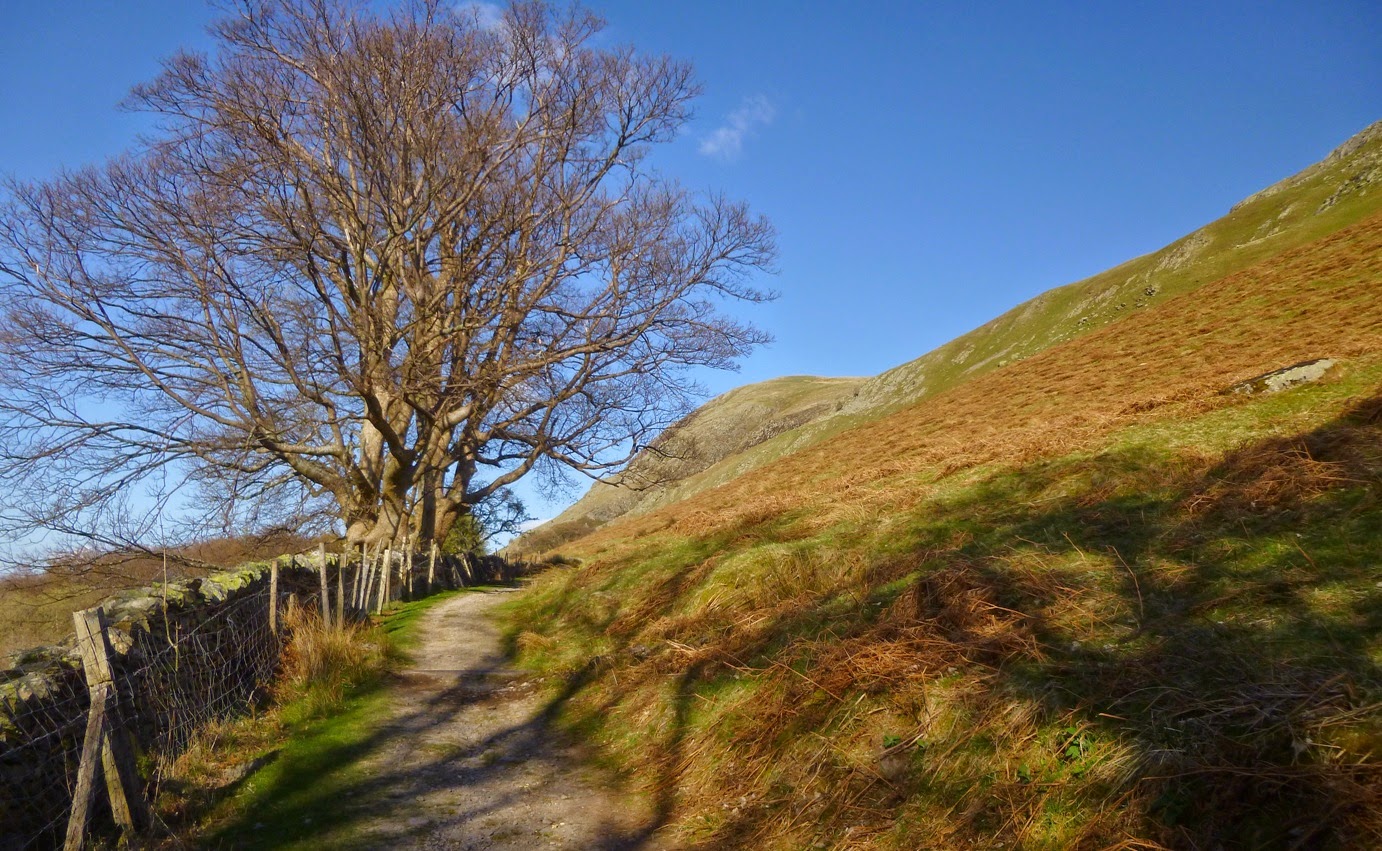 A nice little foray out for our first day in the Lake District. In the end we walked just over 6 ½ miles, and nearly 1700ft of up.

Despite our pleasure at finding the delightfully empty Cross Dormant campsite, we were also due to stop near Brotherswater, so tomorrow we are at a different campsite and Peter has his sights a bit higher for tomorrow's walk.  I am so looking forward to it.