Finding the falls in Swaledale

This walk was a little bit of a Swaledale exploration. I worked out a simple circular route from Thwaite, and invited Mel from the WalkersForum to join me, promising her an easy day of it.


We met at a layby just outside Thwaite and after brief hello's and then a yes, no, yes, no, yes, no, yes discussion about wearing gaiters, we set off on a nice gentle slope from Thwaite to Dirty Piece. (Yes, really). I'd noticed a waterfall marked on the map called Aygill Force and wanted to go take a look.
We got to Angram, crossed the road and then started to make our way towards where I thought the waterfall was. I think Mel was suspicious of my map reading skills, especially when we couldn't see the path (she's probably got a point). But she needn't have worried, I did know where we were and where we were going, despite the lack of paths, AND I have Gizmo (GPS). My only problem was that we couldn't find the waterfall.
I should have remembered how ambiguous OS maps are when it comes to locations. If I'd have looked a little closer, I'd have realised the waterfall was at the end of the OS wording, not the beginning.
But no matter, it caused plenty of hilarity at my expense and it was easy enough to follow the course of the little beck Ay Gill back down to the village of Aygill and Hey Presto, we found the falls. We'd convinced ourselves they'd be naff after all the effort it took to find them, but actually, Aygill Force is a striking little drop. There wasn't a lot of water coming over it when we visited, but we could imagine how it would look after a downpour. Even more attractive was the fact that we found the perfect little seat for a snack stop right alongside.
From there, it was a little bit of trespass through fields to get back to the road, and then left to follow that road into Keld.
Funny enough, I'd never been to Keld before. Mel had, and knew exactly where to get coffee n cake, so naturally we made a beeline for the little cafe. At this point I realised that the money I had deliberately brought with me for the purpose of coffee and cake in the little cafe at Keld was actually in the little purse in a little car just outside Thwaite.

Coffee'd up and raring to go we set off with renewed vigour, and then immediately stopped at the notice board telling us stuff about Keld, (Did you know it's the highest village in Swaledale?). We stopped again five minutes later to visit the unnamed falls at East Stonesdale.

I say that now, but at the time I was well confused. As mentioned earlier, OS maps can be very ambiguous with names, and these falls could be Catrake Force or even Kisdon Force. But they ain't, Catrake and Kisdon are on the river Swale. Once again Mel knew the area better than me, and put me right. I've visited these falls a few times with Peter, and I've always liked them. It's a shame they don't have a name. 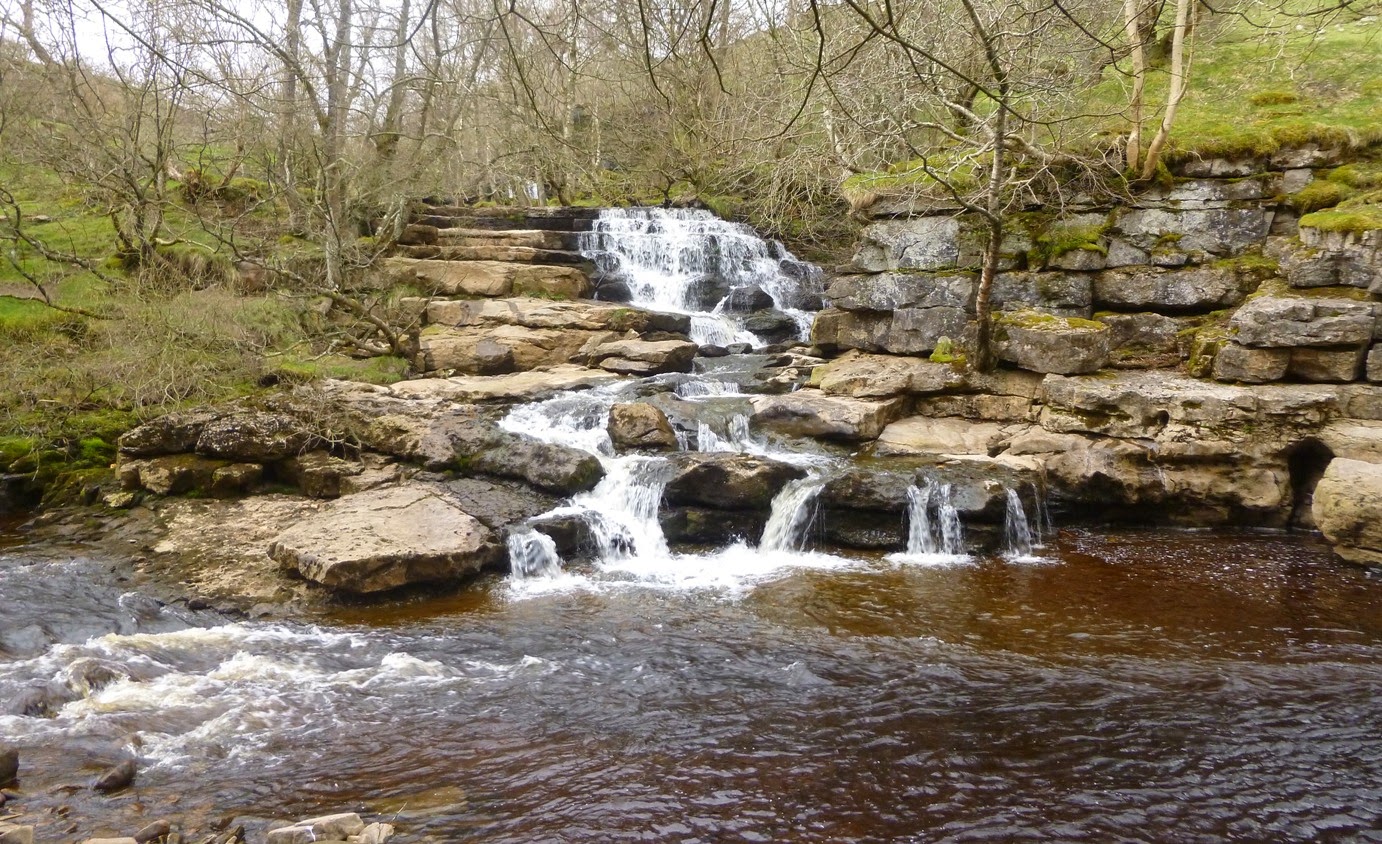 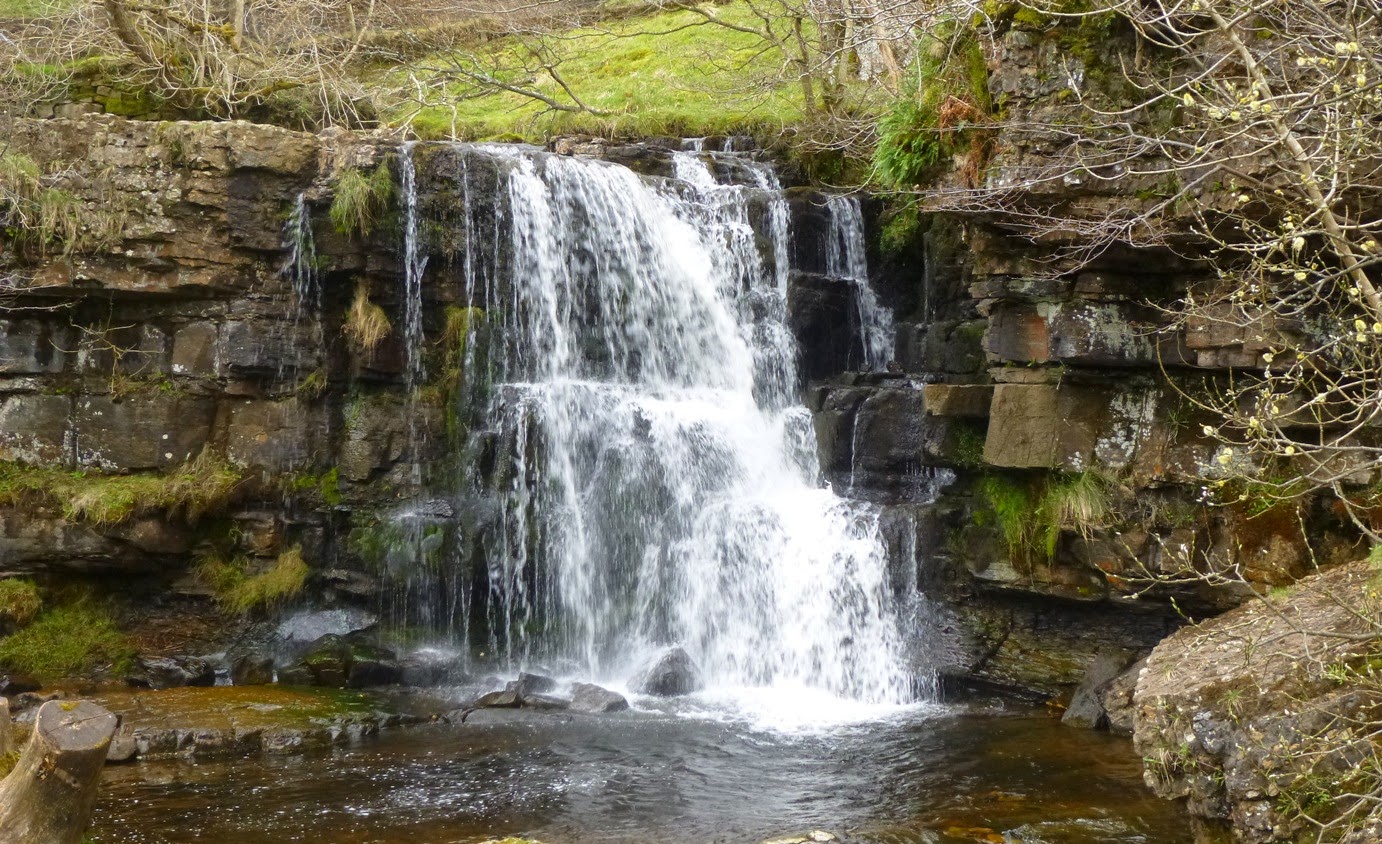 So we set off again, our plan was to take the higher path around Kisdon side above North Gang Scar.

But just before we did, we took a diversion down and around Birk Hill to see Kidson Force. Mel had been here before and remembered where the falls were. I'm pleased she did, as I'd not seen them before.
Now it was time to get back up again to our path. We decided to take the most direct route, i.e. straight up. This meant a load of huffing, puffing and glowing red until we burst out from the trees onto what was, much to our relief, a relatively flat path. Once we'd got our breath back, we turned in the direction of Muker.
We were chatting away, as women do, enjoying the sights and taking photographs. In fact, we'd been chopsing since we'd met, and perhaps, if we'd been less talkative, I'd have noticed that we'd got back from our diversion onto the wrong path and we were now following the Pennine Way. Not that it mattered, we were still heading for Muker, the sun was out and the valley was lovely spring green. The only downer was the wind. Boy did it blow, and it blew cold.
We stopped for a break just opposite Arn Gill and it's waterfalls. We sat in a hollow, "sheltered" by a wall in a completely ineffectual attempt to get out of the wind, which was FREEZING!
We were on the last leg now, Muker was just ahead, and once we got there, all we had to do was find our way out of the village and back to Thwaite. That took three attempts! It was Gizmo that found us our way this time.
And then back to Thwaite, our cars and the drive home. 8½ miles and about 1000 ft of up and down.
Thank you Mel, it was a really good day.
Here's the map. 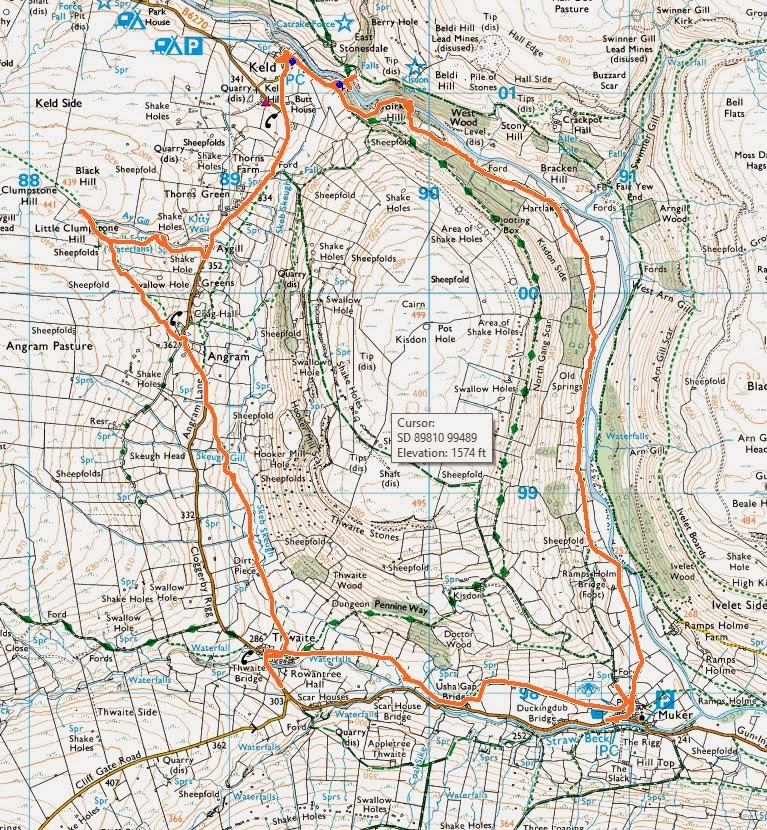