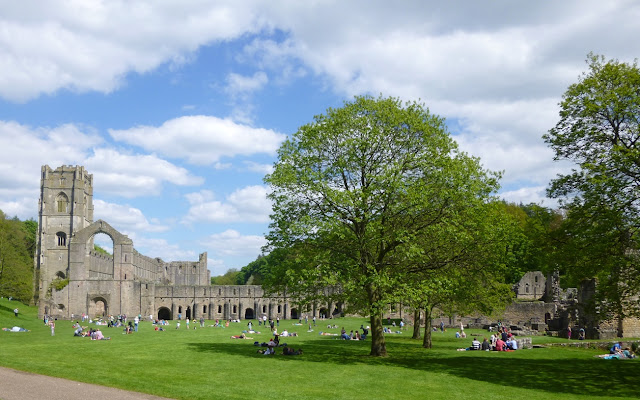 I spend many hours surfing the net looking for places to go and things to see. I've noticed of course, that The National Trust and National Heritage look after loads of the interesting ruins, historical places and areas of beauty that we quite like having a wander around. So at the beginning of May, we joined the National Trust.

As a result, Peter has proved that he really should have been born in Yorkshire. He was over the moon when he realised we had saved money on parking at the NT site of Kynance Cove. And then, when we visited St Michael's Mount and more, for FREE, he could hardly contain himself. In fact he's started to keep tally of exactly how much we've saved, he's so excited about it all.

So, when we were looking around for somewhere nearby to visit on a day out, it wasn't a difficult decision to go for Fountains Abbey. We didn't really know what to expect, but we like ruined castles and old Abbeys, so this seemed like it was right up our street.

When we got there, the first thing we noticed were the signs directing NT members to a different car park than the rest of the masses. Feeling we were part of a select club, we followed the arrows until we eventually reached an attendant who checked our memberships cards before issuing us with tickets and a map and ushering us forward into the "members only" parking are. We were now already on the site, no need to go through any more gates or barriers - we were able to wander as we pleased. Feeling a bit privileged, we left the car and followed the majority on a path we hoped would take us to the Abbey.

As we emerged from the woods, the Abbey suddenly appeared before us, and from that point on, we were captivated. Fountains Abbey on a hot sunny day is absolutely fantastic! We loved it. Our cameras clicked constantly, and we kept grinning at each other, not quite believing how brilliant this place was, or the fact neither of us knew about it. 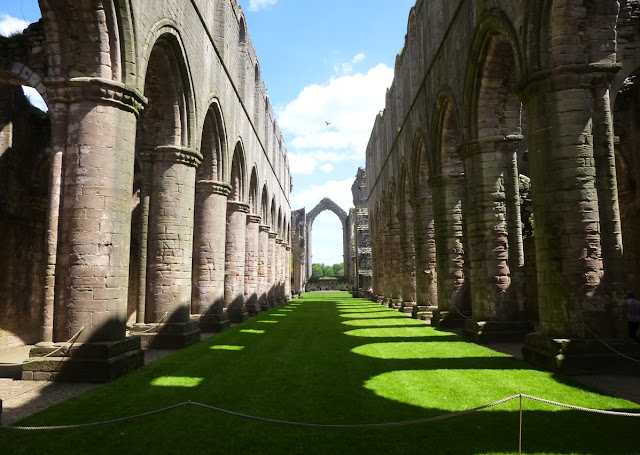 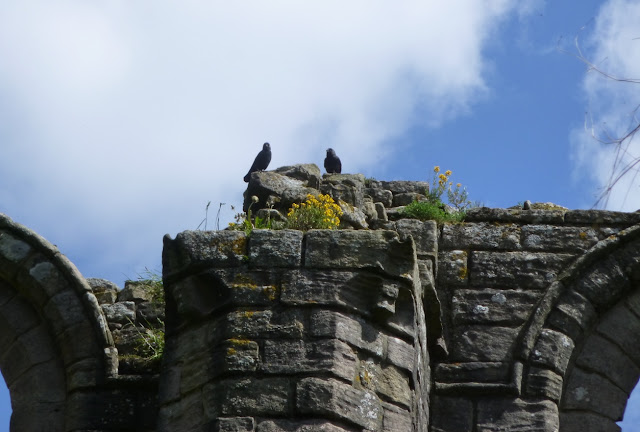 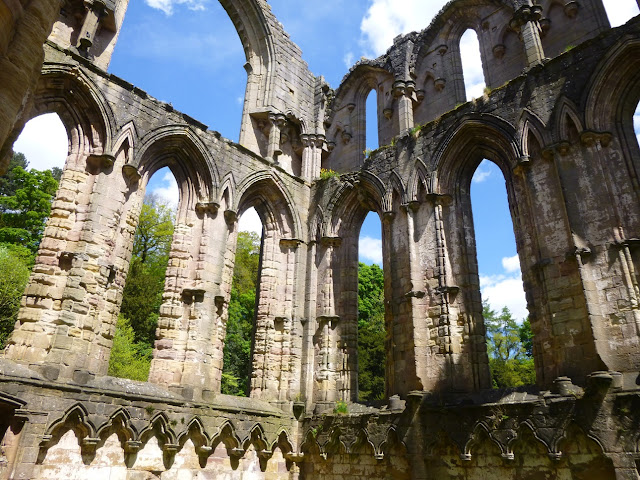 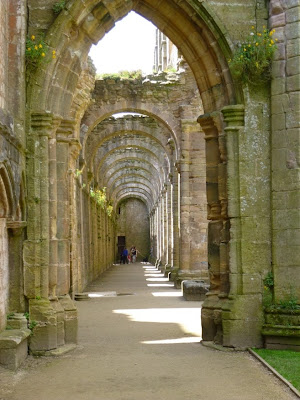 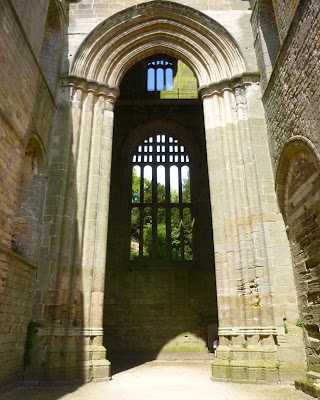 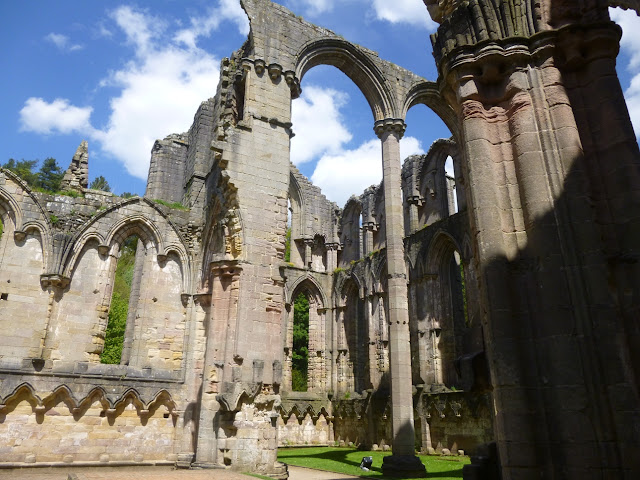 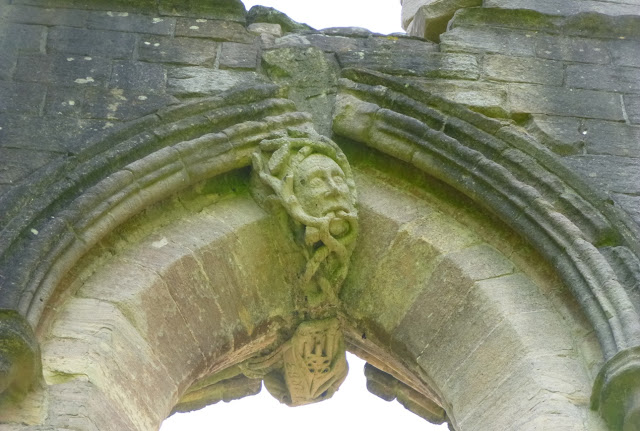 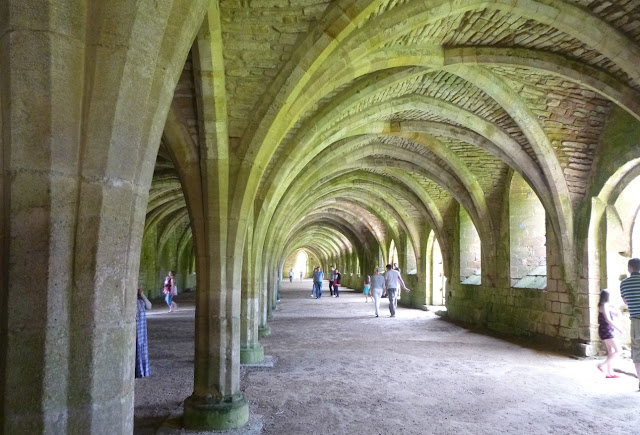 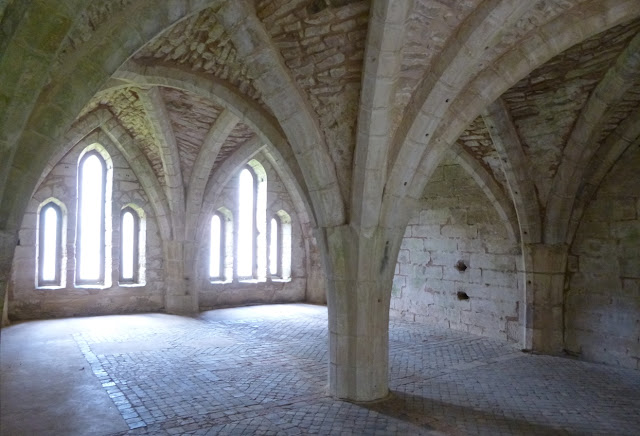 After a good couple of hours, it was time to move on and see more of the site. We had a very quick look at Fountains Hall, but that's because there are only three rooms open to the public. 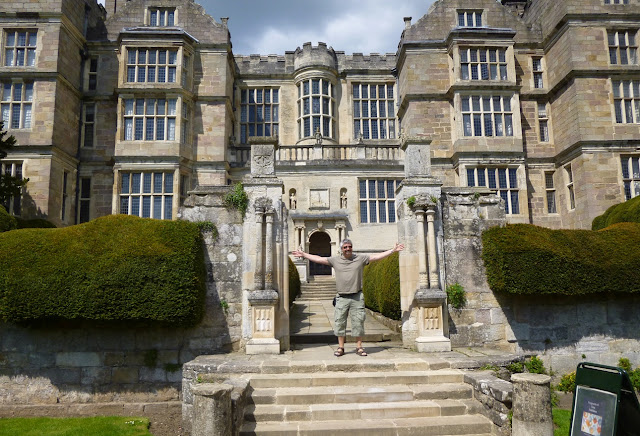 We then made our way to the tea rooms for a tea and a very nice bit of cake before visiting Fountains Mill. The old watermill has a long and varied history, bits of which I found quite interesting. (Sorry, no pics)


We started on the walk around the Water Gardens. Wildflowers on the path side and views of the Abbey. Wonderful. 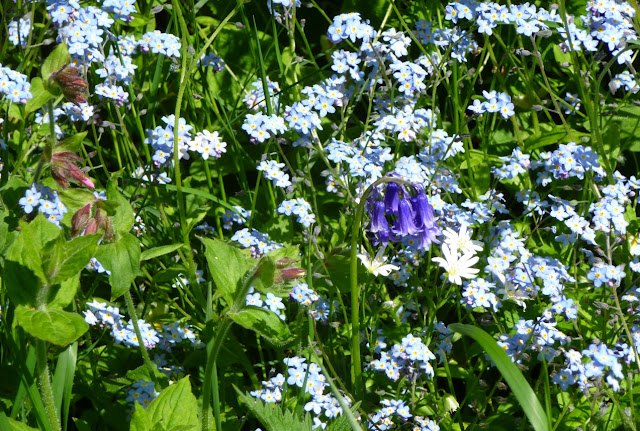 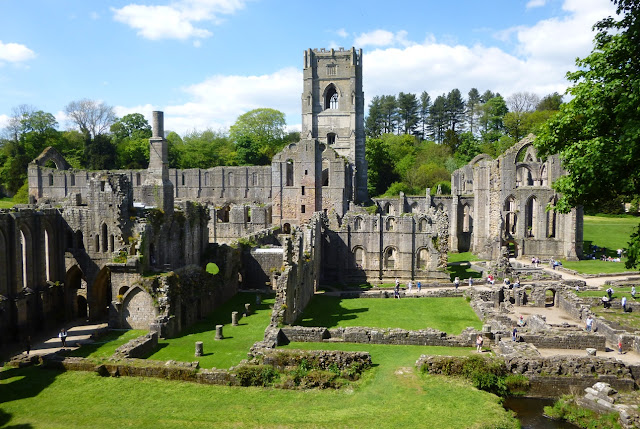 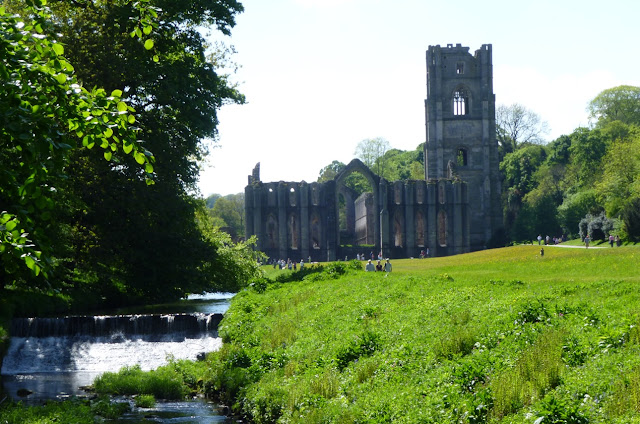 The gorgeous water gardens were created in the 1700s. I could easily imagine Georgian gentry walking the paths, the ladies with their long skirts and big hats, the gents with their stockinged legs, long hair and tricorn hats. There are several little temple like buildings with names like "The Temple of Fame" or "The Octagon Tower" and can select different routes according to fancy. We were charmed by it all and could easily have spent more time investigating the lake, the deer park and beyond, But not this time. We'll save it for another day. 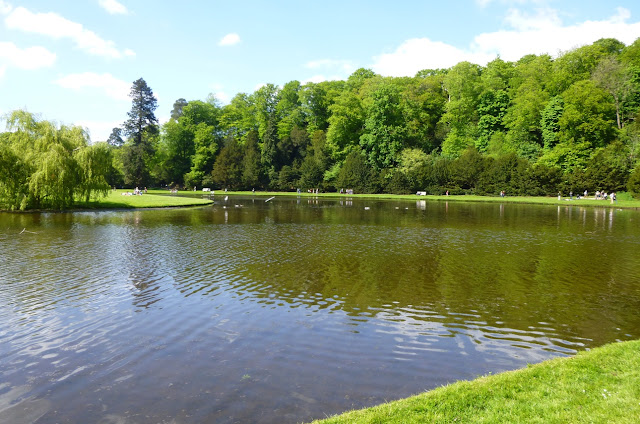 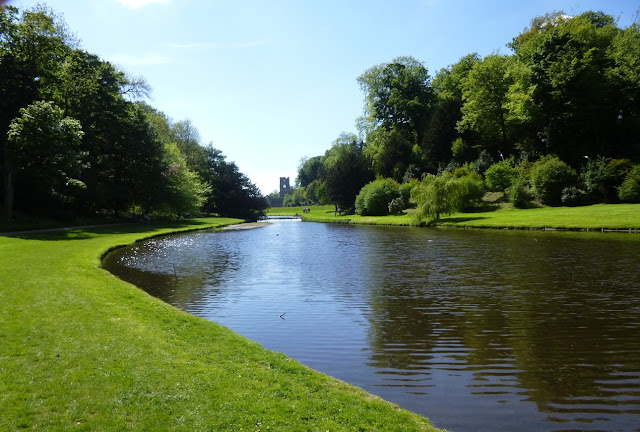 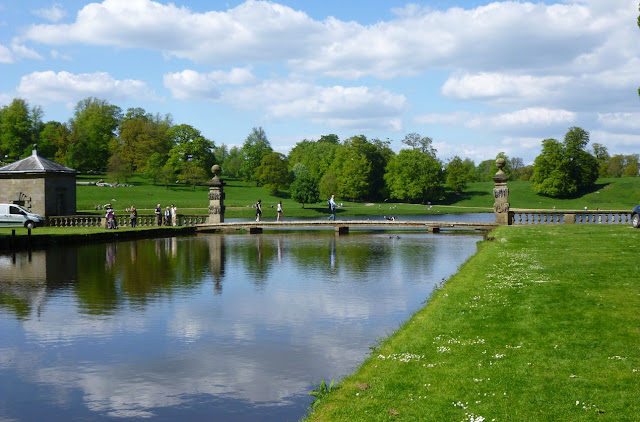 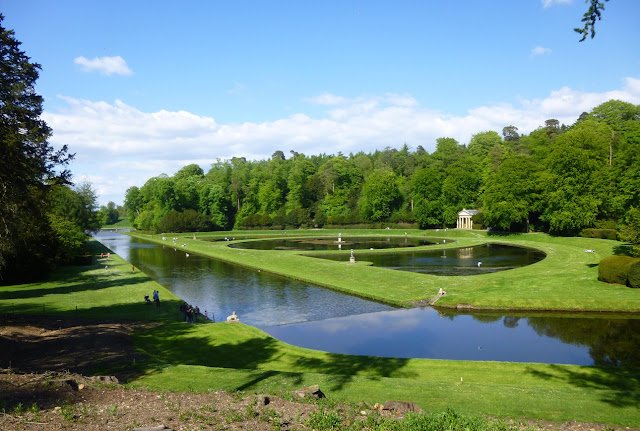 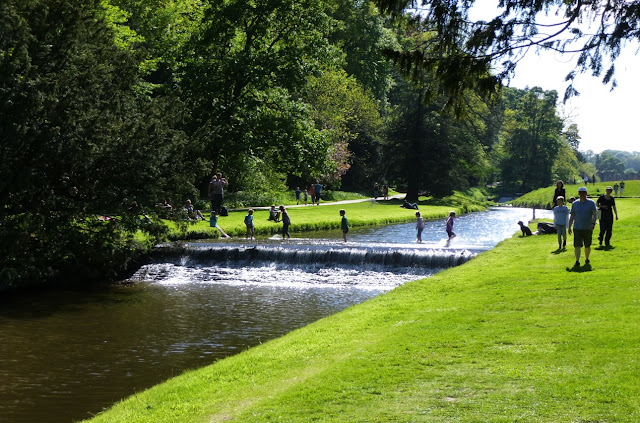 We got back to the Abbey as the afternoon moved into evening and we couldn't resist a few more photographs in the changing light. 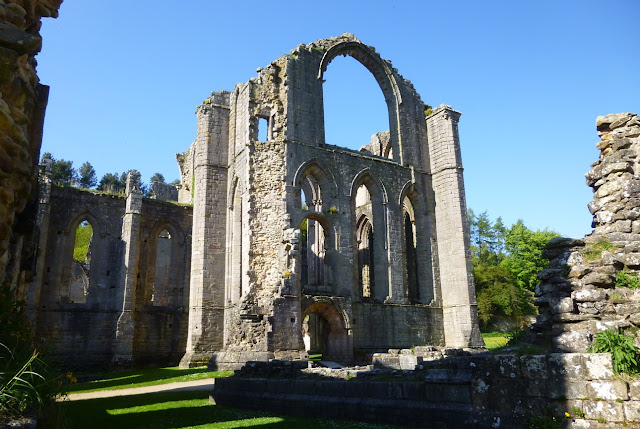 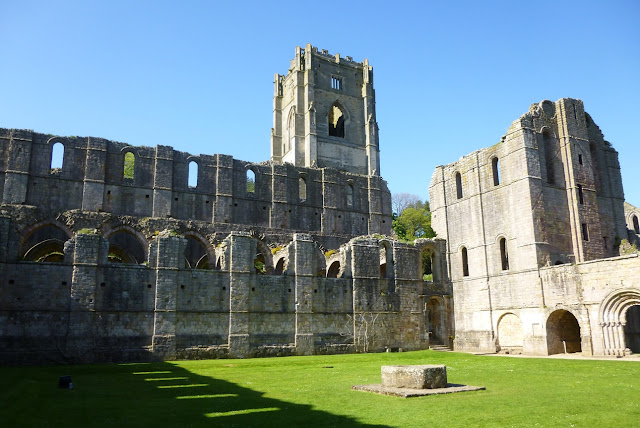 All in all, an absolutely brilliant day. I think Fountains Abbey is well worth the ticket price and we'll definitely visit again. But of course we won't have to pay. I don't know if Peter will be able to contain his excitement at saving even more money.
A last look until next time.... 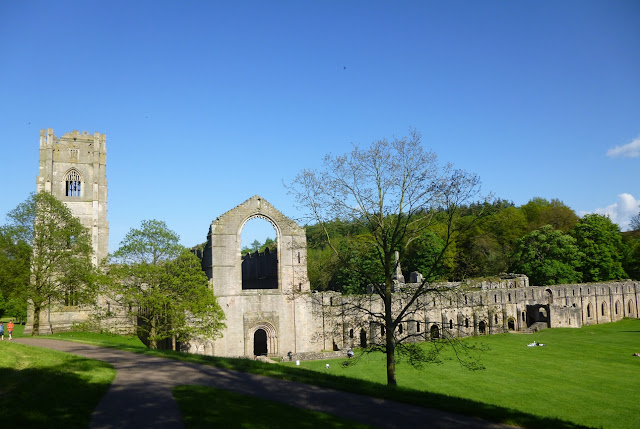