Me n himself went out to buy a van for his business, and came back with a "Motorhome".  (A Ford Transit conversion that's been called campervan, trampervan, transformer and van since we got it.  Maybe we should give it a proper name?)  I wasn't gonna let him have first go at an overnighter on his own, (naturally),  so I joined him on the campervan's maiden trip out to a weekend workshop in Grasmere.

I say joined, what I really mean is got in his way a bit - but not for too long.  Whilst he showed a class of thirteen how to put paint and paper together to create something wonderful,  I went out for an easy walk.  It had to be easy, cos I was saving meself  for the evening, so I took a wander up Easedale Tarn.

I'll just say at this point that the Grasmere area seems to be right smack at the point where all four of the main Lake District OS maps sort of meet, and it would be quite possible that you would need all four if you planned a circular walk in the area.  I only had two, so the circular walk was out of the question.  It also meant I could only go so far east before I fell of the edge of the ones I had.

The path to Easedale Tarn from Grasmere is wide, easy to follow and very popular, especially on a day like today.  Here are the photographs: 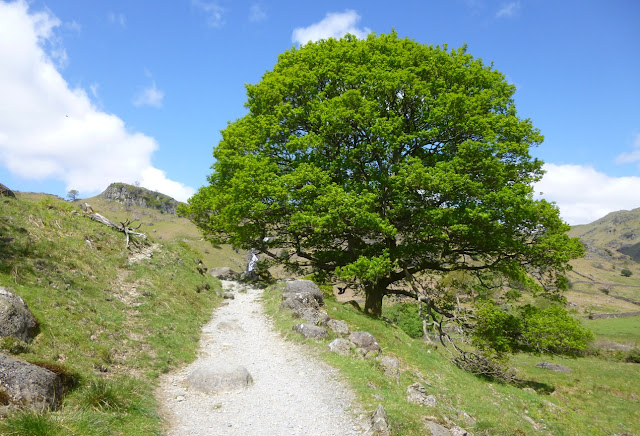 I took my time, but it wasn't long before I got to the Tarn, I ate an early lunch, watched the walkers go by and a pair of ducks wander around hoping to be fed by whoever happened to have food.  There were groups of people swimming, and I watched them splash and scream for a while.  It was far too early to start making my way back and I looked at the surrounding paths, trying to work out how much further I could go.  I started to walk up towards Blea Rigg, but as I said earlier, my map ran out and my GPS isn't the best thing to use to plan a route, not only that I wasn't supposed to tire meself out. (I promised Peter). So I turned round to start the walk back to Grasmere.  I didn't want to take the same route back though, so I first crossed over to the West side of Sourmilk Gill, and then (because the main path was going the wrong way), followed a sheep's path along the side of the Gill back down to Easedale.  This was a little more fun than the way up, and involved a tiny bit of scrambling.
I managed to stretch this out a bit, but I still had plenty of time.  A little potter round Grasmere, a coffee and a short nap filled the in the time until Peter managed to wave the last student off and it was time for us to get together for the evening's exercise.  It has become traditional for Peter to walk up Helm Crag before the evening meal every time he runs a workshop in Grasmere, and today was no exception.

We set off just a little before 6pm.  The evening light was wonderful, and here are a few more photo's:
And then we were back in Grasmere, for a well earned pint in Tweedy's Bar before go back to the van for supper and our first night's sleep within.  (Very comfortable by the way).

About 9 miles and 2000 ft of up (including all the wandering about).   Here are a couple of maps: Tomorrow I have something a little bit higher and further planned.