One of our aims this year was to get me up the summit of Blencathra.  Peter had worked out a route to get there without going along Sharp Edge, (cos there is no way I am going along that!), and this weekend was the weekend to do it.
Now he could have picked Scales Fell, or Doddick Fell, but he chose Hall's Fell and Hall's Fell Ridge.  He says he's not been up that way before, he didn't know  anything about the ridge and he didn't notice how tight the contour lines were on the map.  Me?  As soon as I saw the route,  I immediately spotted how tight the contour lines were, which led to immediate research and immediate images of how steep the sides of that ridge are.
As it happens,  I got some help from Sharkey's Dream, and looking at a few pictures on his blog post convinced me it would be a good route, not scary at all.

We decided Bank Holiday Monday would be the day, cos the met office (who are of course absolutely always right), said it would be absolutely stunningly gorgeous from about 1 o'clock onwards, so we didn't hurry and arrived at Threlkeld about midday, turning into the tiny village and heading for the car park.

The car park is not very big and you pay using the honesty box.  It lies just at the base of Gategill Fell, and is the perfect starting point for our walk.  Our late start paid off, as we approached, Blencathra had his head in the clouds.  Mist and grey swirled above us over the higher ground, but we knew it would disappear as the afternoon wore on. 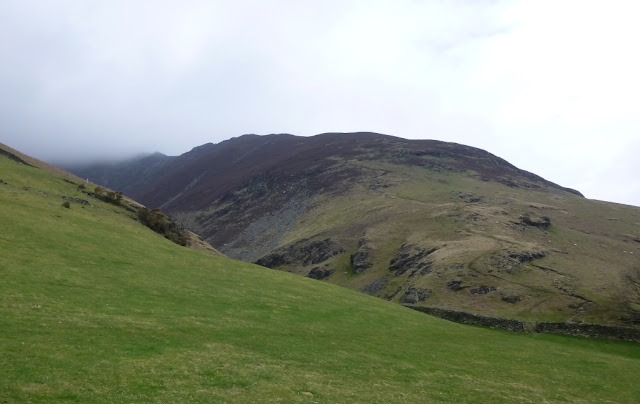 As we reached the base of Hall's Fell, we watched in admiration as three farmers and their dogs worked together to bring a flock of sheep down the steep banks, across the river and into a pen.  The farmers probably thought we were slightly nuts as we watched, in awe at how the dogs worked, happy and excited.  We both have a real respect for such a well developed working partnership.  This scene never ceases to amaze, and we will always stand and watch in wonder. 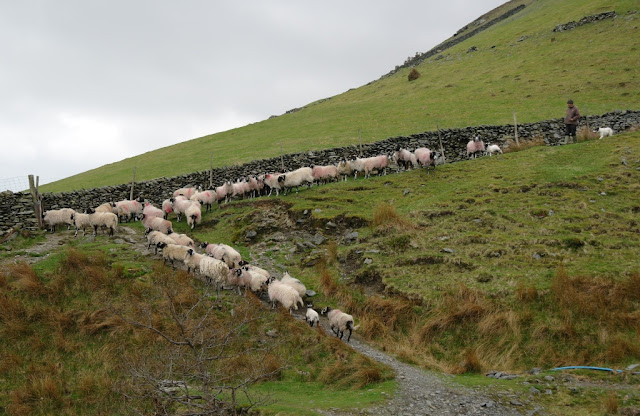 So now we were at the start of the ascent.  I am very slow up hills, the steeper, the slower.  In front of us was one very steep hill.  But it was fine.  I took my time,  and Peter took his photographs.   We paused to enjoy the views as they began to open out.  We spent time trying to work out the names of the fells in the panorama before us, and gradually we made our way up over the bulk of the fell towards the ridge.  All the time, the clouds above us were clearing, and it wasn't long before there was little overhead except blue, blue sky and bright warm sun.  A cool breeze made it perfect.

I was sort of looking forward to seeing the ridge and making our way across.  Peter really didn't know what was coming and was pleased with the sight as we rounded the side of one burly knoll of rock and Hall's Fell Ridge suddenly appeared  before us. 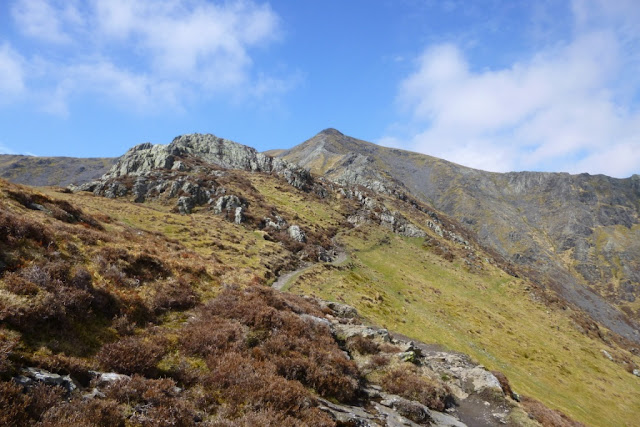 Generally Hall's Fell Ridge is a bit exposed and scrambly. 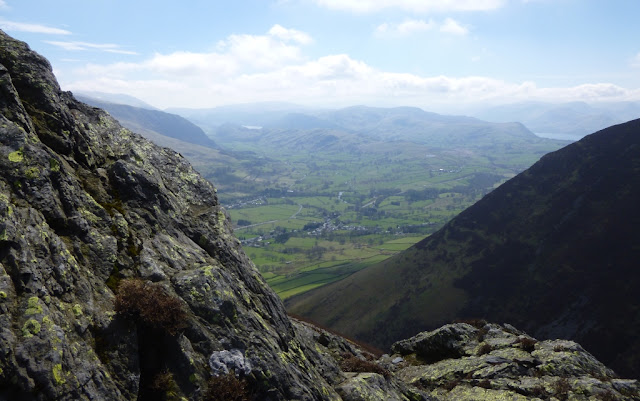 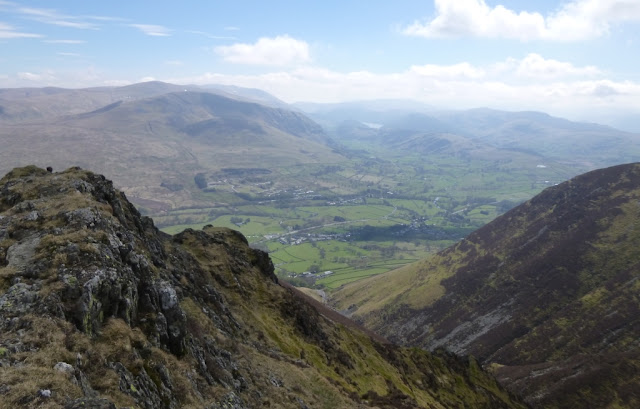 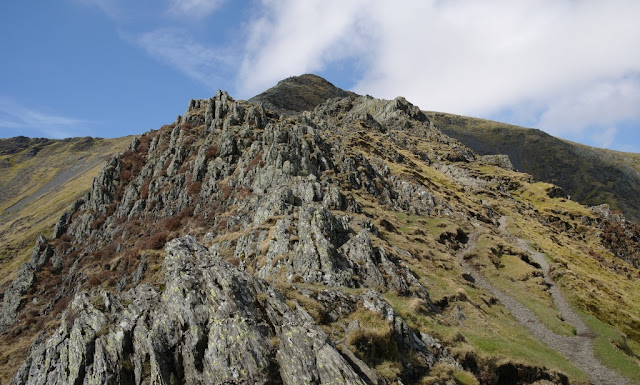 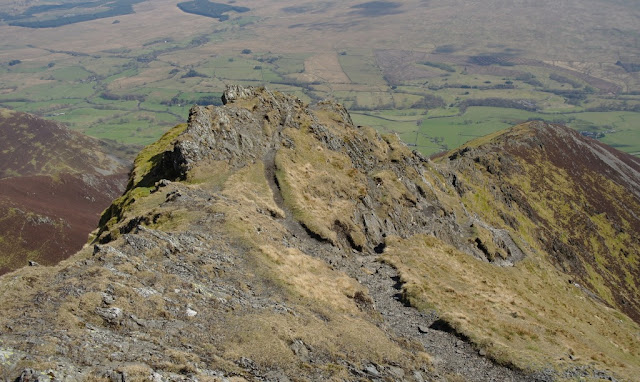 With a little encouragement from Peter, I managed the rest of the ridge with just one more little wobble. 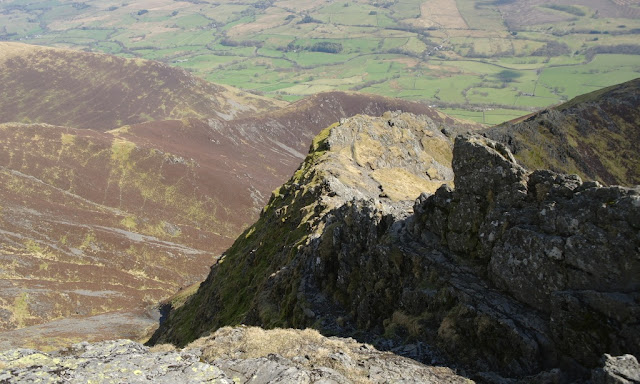 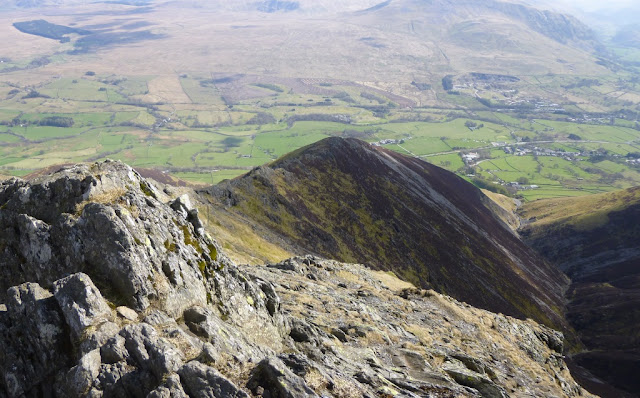 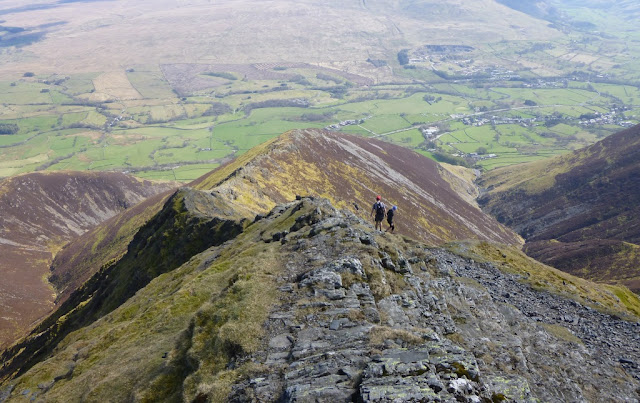 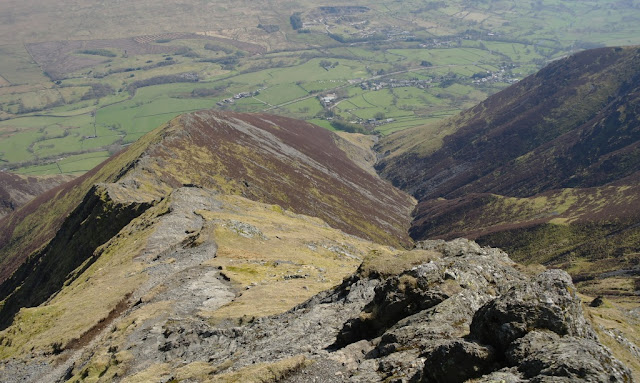 The  final approach to the summit was quite steep, but not too difficult, and then, all of a sudden, we were there.

The views are stunning, especially on bright sunny day.  It's amazing how steep and rough the sides are on the south and east of the mountain, compared to the gentler grassy slopes of the north and west.  I wanted to see Sharp Edge, so we walked over to a point above Scales Tarn to have a look.  Sharp Edge doesn't look like it deserves its reputation from where we were. 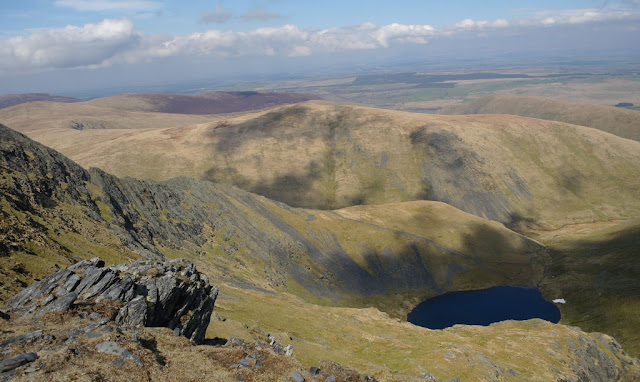 We spent a while up there, on the top of the world.  Glorious in the sunshine, we could see everywhere laid out before us.  We sat for a time, soaking it all up.

Sadly we couldn't stay forever, so we turned to make our way back along Blease Fell.  Such an easy route down in comparison to the way we'd gone up, although it was a long one.  To our delight, the paragliders came out to entertain us as we walked. 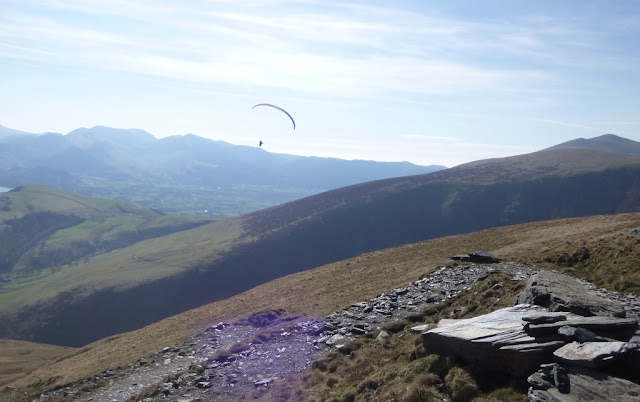 They rose on thermals from valley floor, gently wheeling around and around.  They soared past and above us, absolutely silent, rising on the warm air in front and behind.  It seemed they were everywhere. 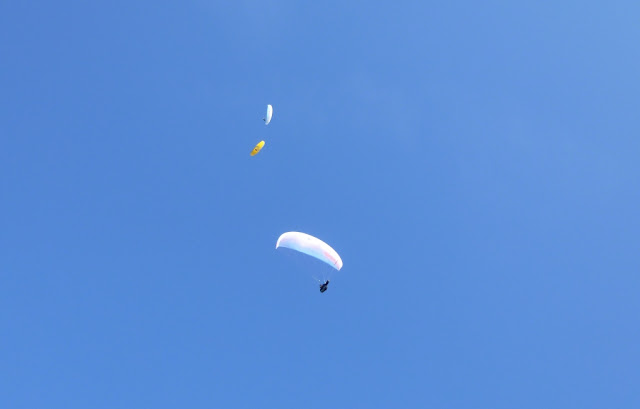 What a fantastic experience it must be to fly that way.  And how lovely for us to see them. 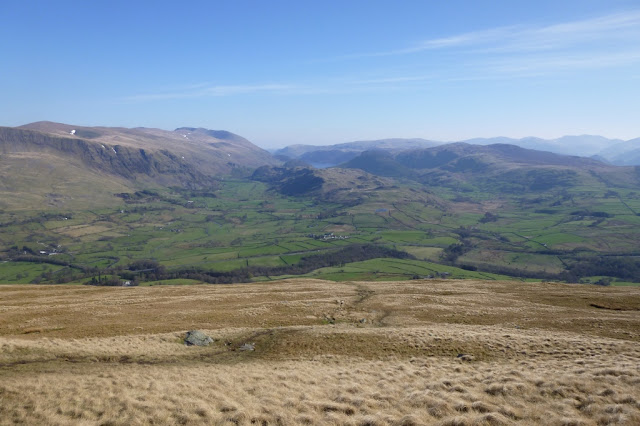 And then, it wasn't too long before we were back at the car, and then onto the beer garden of the Horse and Farrier Inn to finish the day with a long cool drink.    I thoroughly enjoyed that one.  Now I know what Hall's Fell Ridge is like, I would be very happy to do it again.  I might even go over that scary bit next time.

Just over 5 miles, and 2500ft of up. An excellent afternoon.