I've been planning this one for a while, ever since we fell in the beck on a walk up to Ingleborough and Peter had told me he'd been down there.  He said that the cave at the bottom of Gaping Gill was big enough to house York Cathedral.  This I had to see.  So I did the research and found out that Bradford Pothole Club have a winch meet every Spring Bank Holiday.   I persuaded Peter to keep me company and visit the cave again and we set of early (for us) to get to Clapham village and then Gaping Gill before the rush. 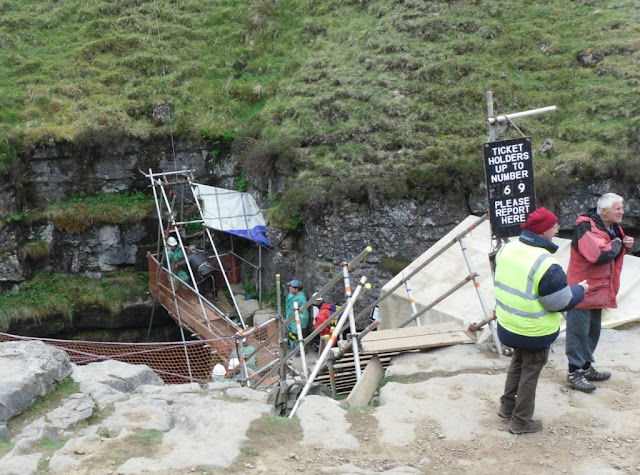 The only way to get to the cave entrance is to walk 3 miles from Clapham Village, so once parked up we set off to arrive at the winch meet at around 10 am.  We got our "tag" which is basically a number telling you your place in the queue.  I had 99,  Peter had 100.  People with tags around 60-65 were being called forward to take their turn.  We were told it would be about 1 ½  hours before we would get our go.  We had expected this, and sat down to watch the goings on. 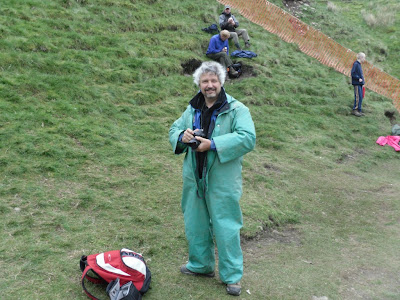 And there were a lot of goings on.  One of the things the Pothole Club do is provide hard hats and waterproof overalls.  People were rummaging through the attractive green garments to find their size and then retiring to their spot on the hill to get the blasted thing on.  One guy was trying to get into an set of overalls that didn't fit. He couldn't get them over his shoulders, so his friend tried to help him. They were yanking and pulling and he almost ended up on the floor. We couldn't help but laugh outright, poor guy.  Luckily he was laughing too and didn't take offence. Once they'd managed it, it became obvious that the set he'd chosen had been designed for a gnome.  The trouser bottoms were just below his knees, he couldn't do the fastenings up, and I'm certain he couldn't bend in the middle.

We watched the people arrive and get their tags, the people being winched down, the people being winched up and the goings on of the proper cavers.  1 hr 30 mins went past really quickly.
Tip for anyone else doing this, take extra layers of clothes.  Depending on the weather, you can get really cold whilst waiting.  We kept our coats and gloves on to go into the cave too because we were told it can be very cold and damp. And pick overalls at least two sizes too big. Both Peter and I had the same fight with our protective clothing as the man earlier.  Hysterically funny all over again. 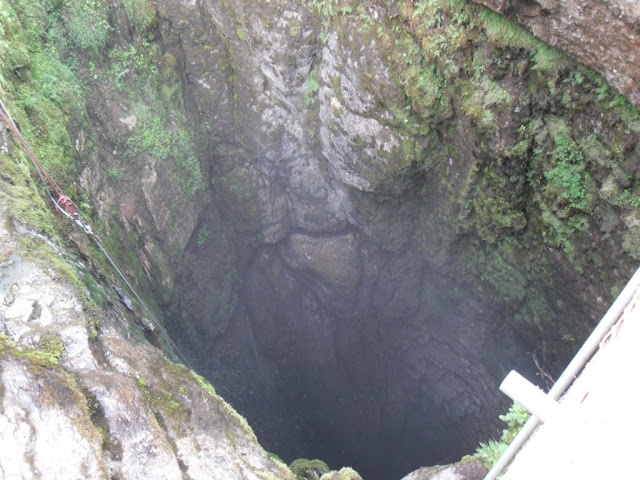 Then it was our turn.  I was a little worried about the winch.  It looked quite fast as people went down, and I imagined it would give a stomach lurch like a fast lift.  Actually, it didn't.  It was  really smooth and easy.  Going down, I tried to look about me and see as much as I could.  Awesome. The next picture is an attempt to give some sort of scale.  That's the winch seat containing a person in the middle of the photograph. 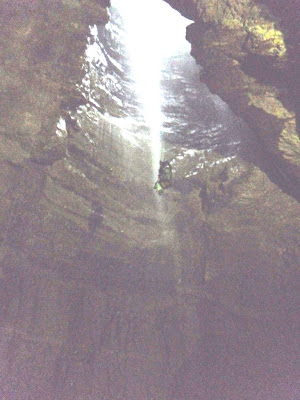 And then, very quickly, I was at the bottom, with my eyes adjusting to the light.  They set big halogen type lights up so that you can see the full size of the cave.  And it is big!
To be honest, as far as caves go, this one is relatively plain.  What I mean by that is there are not wondrous stalactites, or stalagmites, or crystals or rock formations to grab your attention.  It is a very big cave, with lots of nooks and crannies for caving type people to investigate.
We admired the waterfalls, the light from Gaping Gill, the shapes and layers of rock in cave walls, the sheer enormity of the space around us and read the information provided.  For cavers, Gaping Gill is a wondrous place with loads of exits leading to a network of passages, further caves and "halls".  We watched with interest as the helmet lights appeared high in the main cave wall, descended down to floor and moved along to disappear into another hidden passage.
We took loads of pictures, knowing that there wasn't enough light for the camera's.  But we tried anyway.  Peter’s camera did better than mine, and the next photographs were taken by him. 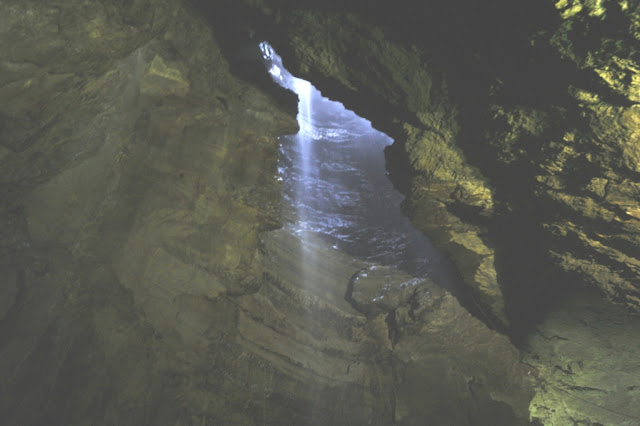 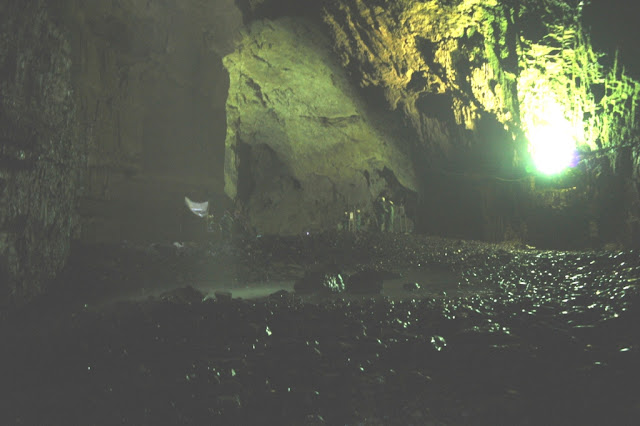 And then, once we'd had our fill of the dark, it was time to go back up.  So we waited our turn before going out the way we came.  We handed in our tags, (so that they knew we were back and didn't send down a search party), and sat on the bank to eat lunch before heading for our next little trip underground.