Bow Fell and The Packwoman's Grave

Today was another Walking Forum get together, where I met three other intrepid adventurers Rich, Kev and John, for a walk up to Bow Fell. 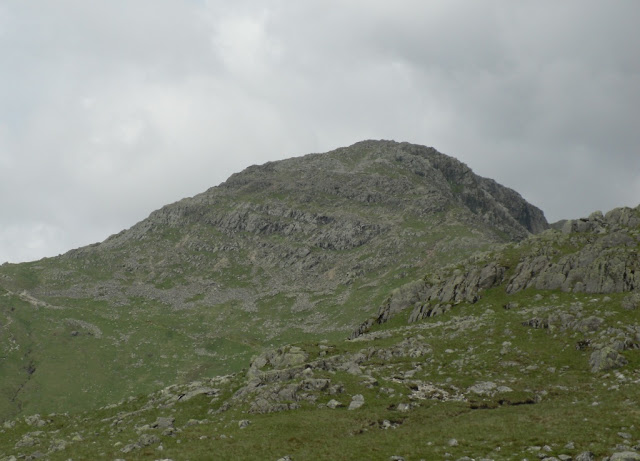 Just before we started, the very knowledgeable Kev told us the story of the Packwoman’s grave.  She was:
“an elderly hawker who travelled the hills towards the latter part of the 18th century. Peddling general wares at Lakeland farms, she would have been a well known visitor and no doubt her local knowledge would have enabled her to plan her itinerary to ensure that she reached shelter before nightfall.  Unfortunately, one morning she was discovered still surrounded by her wares, having apparently frozen to death in the remote hills. As it would be known that no claims would be made upon the corpse an immediate rudimentary burial was expedited”    Paul Grantham Packwoman’s Story.
She is mentioned in Wainwrights books, he thinks she was buried around 1790.  Because her story is not well known, and because the grave is not easily seen from the path, it isn’t visited often.

Our little group was easily persuaded to change the planned route and venture where no man had been before (that day…….. probably), to find her.  We also wanted to walk along the Climbers Traverse to find a spring under Bow Fell Buttress where the water was sparkly clear and clean enough to drink.  So, we set off for the path up The Band towards the great Bow Fell.
The last time I walked along The Band, we were coming down, and it had seemed to take absolutely forever.  Today wasn’t so bad though, despite the fact we were going up it seemed to be much shorter. 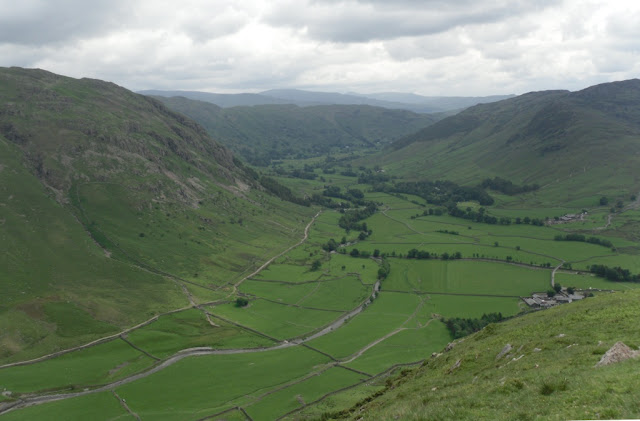 I’m beginning to learn and recognise fells and peaks around me, and I sort of feel much more comfortable about the area, because I have a better idea of where I am.  I did of course keep asking the others “Tell me again…. what’s that one called?” 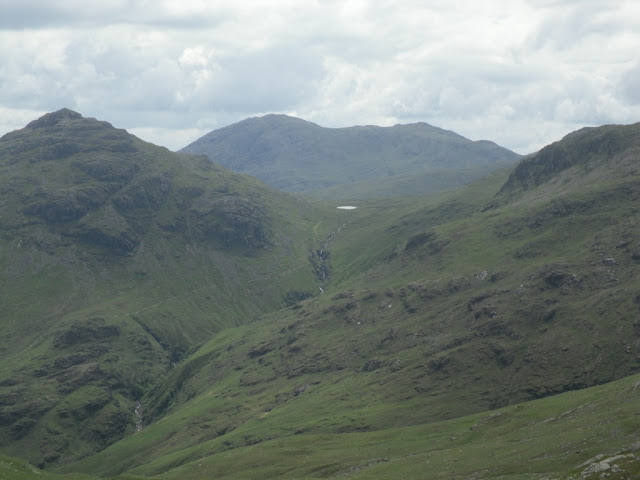 From The Band we walked under along the Climbers Traverse under very impressive crags and buttresses below Bow Fell summit.  Massive, dominant they leaned over us. I could imagine the delight of climbers when they first see them. Awe inspiring. 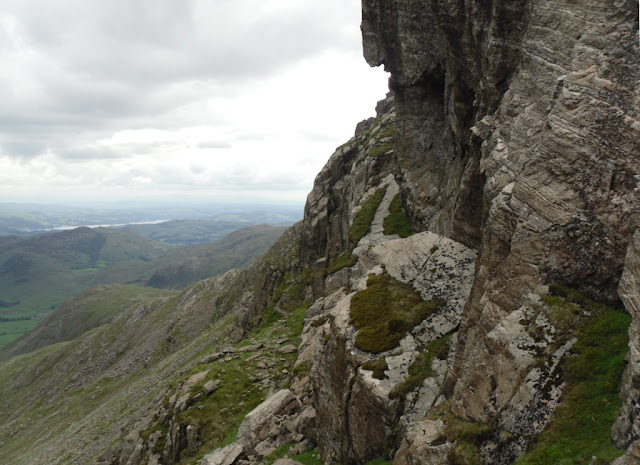 We found the spring, and yes, the water is delicious.  Very cold, very clear, and tasting like melted snow. Lovely.  After filling everyone’s bottles, we scrambled up the rocks alongside the Great Slab to reach the last stretch of path to the summit.  Now we’d got to the top, it was time to rest and admire the views……. And experience our first midge attack.  Blasted things.  For being so tiny, they can be massively irritating.
From our viewpoint,  I was very interested in Scafell since Peter has said that this is where we’ll go when we visit for our camping trip.  I don’t know if anyone else can see it, but Scafell Pike sort of reminds me of the head of an octopus from this angle. 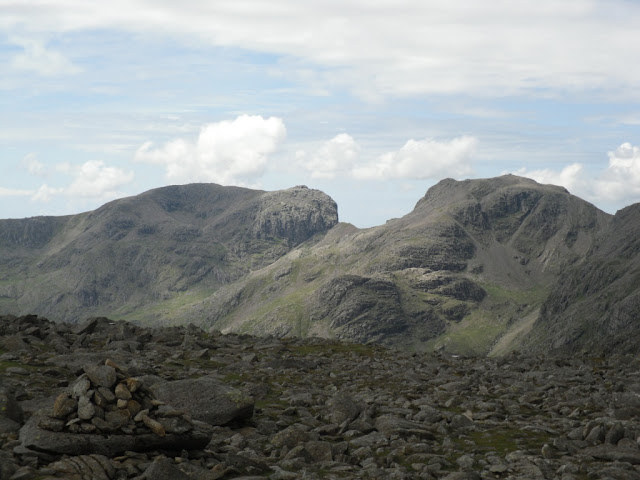 So now, after climbing all that way up, it is time to go all the way down.  We stopped at Angle Tarn for a five  minute rest, snack, drink and midge attack.  The midge attack was the reason we only stopped for five minutes.  I wandered over to see the tarn close up.  Very clear water, no fish or minnows to be seen, just a single tadpole. Lovely though, and I bet brilliant to swim in on a hot day. 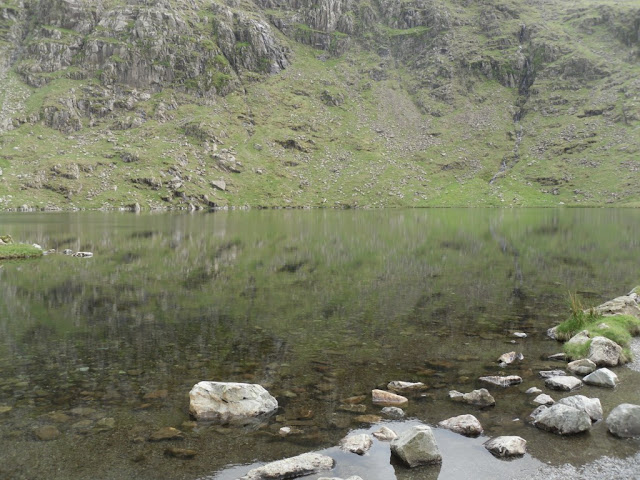 Then we took the path down beside Rossett Pike (which doesn’t look very big from Angle Tarn) and down to Rossett Gill.  Looking across and over the edges of the path which has been created by setting stones into the bank, Kev spotted the cross of rocks and stones that marks the grave.  Pleased with his find, we made our way down and over to see the last resting place of The Packwoman.  It was actually a lovely spot, loverlooking Mickleden and Langdale, surrounded by the Fells.  I am sure there are worse places to spend eternity.
More of her story here: Lakeland Hunting Memories - Packwoman's Grave 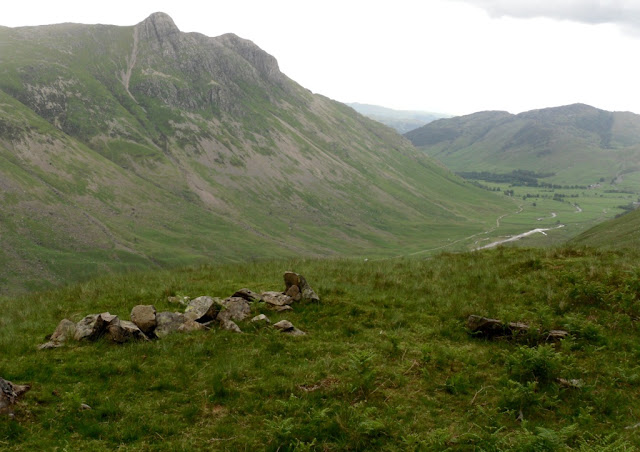 A few minutes absorbing the scene, and then it was time to complete the final leg of the walk, down to the valley floor and alongside Mickleden Beck, following the stream round into Langdale until we finally got to back to the Stickle Barn for a well earned pint (of orange and lemonade), and a bowl of chips.  The weather had been good to us, we have had a brilliant and interesting walk, and despite John suffering a bit of pain due to a heel problem, we all had an excellent day.
Just over 8 ½ miles and 2863ft  of up (and down again).  Our route:

And finally, a view from the top of Bow Fell: 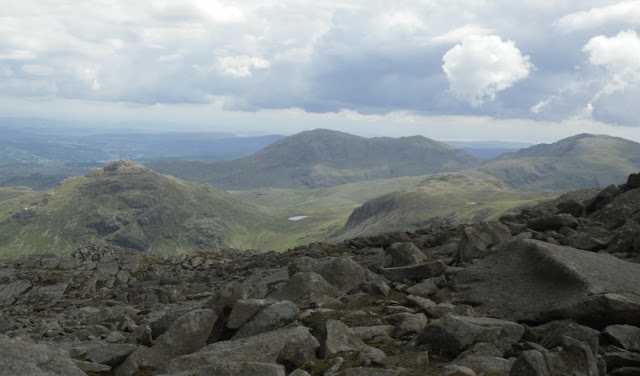 Peter and I are due to stay at the National Trust site for a weekend in July.  Not all my previous experiences of the site are brilliant (not much sleep for example), but the good memories are obviously much stronger than the bad ones, Eating chips and enjoying the evening sun, watching the shadows move across Langdale, I got all excited about our forthcoming camping trip..........  Scafell here we come!