Unremarkably the highest peak in the Dales

Me n himself are just getting back into the walking thing. We’ve been out a few times (3), and are beginning to work up the miles and complete some decent walks. (6 miles).  We’re even thinking we might be able to take on the big hills...... Well, some of them. Peter suggested a walk up Blencathra next.   I suggested that the attempt might kill us – so we chose something that needs a little less stamina.


So Whernside it was. The weather forecast for Sunday was good – and we were up at the crack of 8 o’clock, rushed about to be out of the house by 9:30 and managed to make good time and be at the Ribblehead Viaduct a little after 10.15.  (OK........ So we're not very good at mornings.)

As we arrived at the the car park, Ingleborough dominated the area – it was the only snow covered peak around and it looked big and steep and hostile. Whernside, on the other hand rises steadily from the landscape, almost unnoticeable as it grows upwards to overshadow all other Yorkshire Peaks and announce its claim, at 2414 feet, to being the highest summit in the Dales. 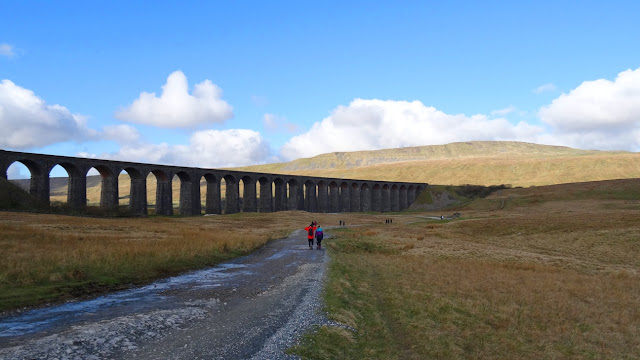 And of course, in front of Whernside, we had Ribblehead Viaduct carrying the Settle-Carlise Railway across Batty Moss. A stunning piece of engineering and architecture that brings many, many visitors who come to just look.  It really is amazing.

Our route today didn't involve any steep hillside walking.  It was more of a saunter up a very long slope -  which suited me perfectly. (Considering my level of fitness, saunter isn't quite the word, but it'll do). The descent would be a bit steeper though, so we had our walking sticks with us just in case.

The weather was perfect - a dry day with loads of sun between the patchy cloud.  But boy was it cold!  Trust me, layers are the way to go, and it didn't take long to warm up once we'd set off to join the many other couples and groups all heading the same way.

Our route took us alongside Ribblehead Viaduct, past an old Signalman's cottage and up Blue Clay Ridge, (I like that name).

Here's my favourite picture of the day.  Snow covered Ingleborough with the old Railway Signalman's house in the foreground.  Sadly it looks like there are only a few rusting vehicles in residence to enjoy that view. 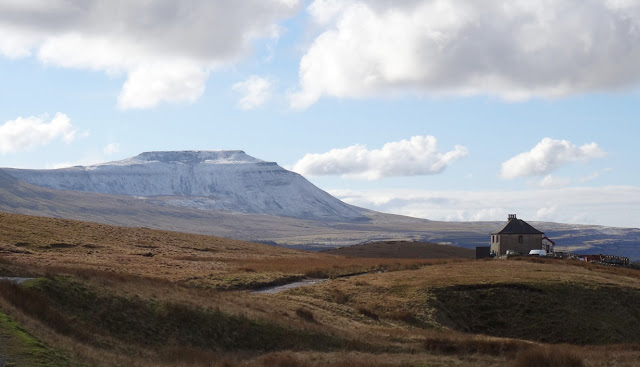 As I said earlier, Ingleborough dominated the landscape - it just looks so good in white. 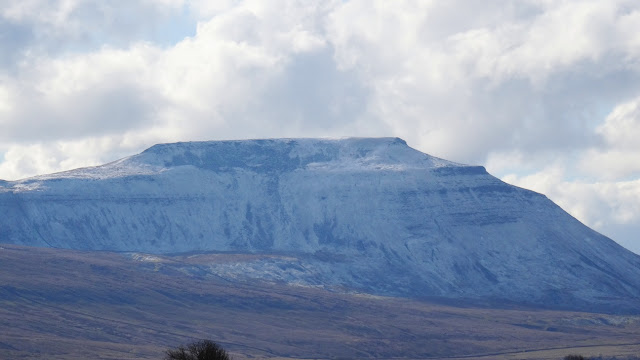 Next was Force Gill Waterfall. Sadly our path didn't allow for a close up. 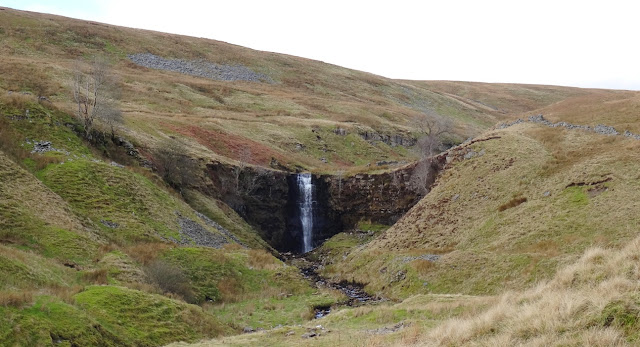 We slowly ascended Grain Ings heading for Knoutberry Hill.  Looking back we saw what looked to me like jelly moulds. Peter described them as zits!  Actually, they are the spoil heaps from the excavation of the railway tunnel below. 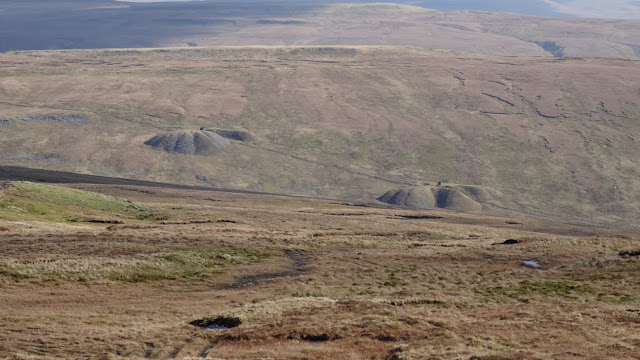 I loved this view, it just seems to go on forever. But you can't tell from the photograph how cold it is, or how strongly the wind is blowing.  It was hard to hold the camera still! 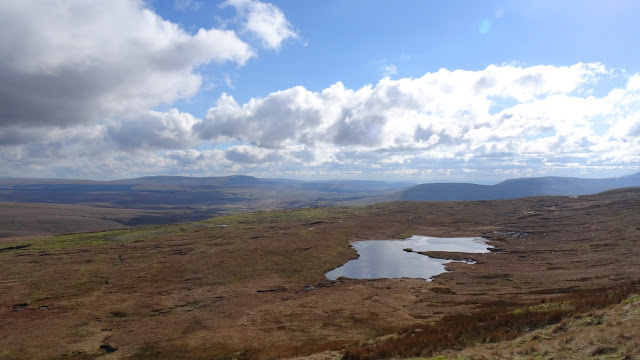 The photo above is the view on the left as we were walking.  I think I should have taken a picture of the view on my right, if only so I could show you Hag Worm Haw Moss!

The last leg of the walk up takes you along Cable Rake Top Ridge. (My head is twisting the words and wants to say Cake Top. ........  Mmmmmmm Cake!  But I digress.)   The wind was on the ridge hard and absolutely bitter! We were relieved to reach the little walled shelters at the summit.  At least there the tea remained hot in the cup, and gloves could come off long enough to eat a sandwich.

But the views from the summit were well worth the biting cold. The air was so clear that we could see the whole of the Lake District range to the North West, the Howgills to the North, and even Cross Fell, the highest point of the Pennines, could be made out North East  To prove it, here's a photo where you can just see snow topped Scafell Pike and chums in the distance. 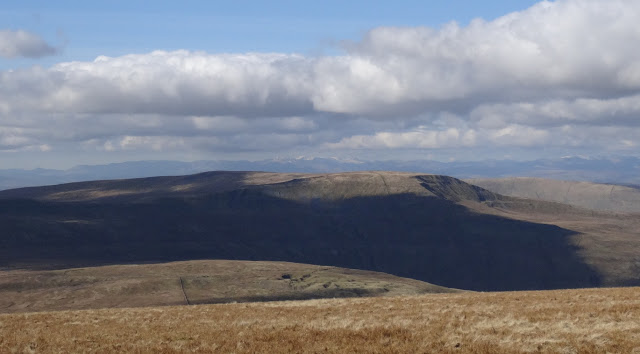 At least, I think it's Scafell Pike.  More learned walkers may tell me otherwise.  Here's the zoomed in view. 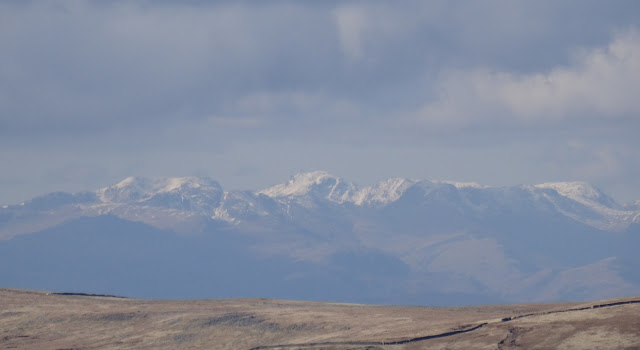 And here's another picture of Ingleborough. 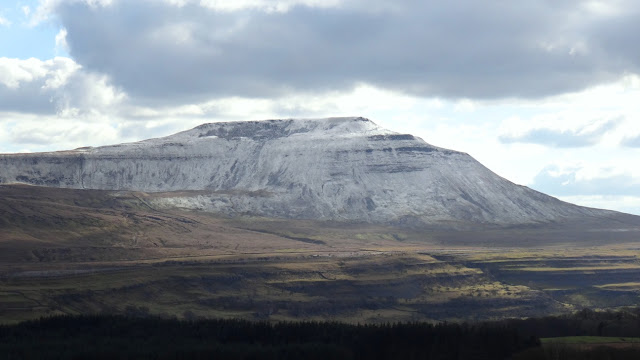 I have so many from this walk - it was like a "Let's go to Whernside and take photo's of Ingleborough" day. You have to admit, it does look imposing - and almost demands you make the attempt to get to the top.  We might just do it too.

Our descent from Whernside summit was down the slope of Scar Top Pasture.  It's reasonably steep, with a rocky path that demands attention all the way down.  So no pictures until we got to the bottom - just wobbly legs.  (Another symptom of our unfitnessness).

So now we're on level(ish) ground and this is not a picture of Ingleborugh - I just loved the white of the limestone rock as it surfaces through the scrubby grass. 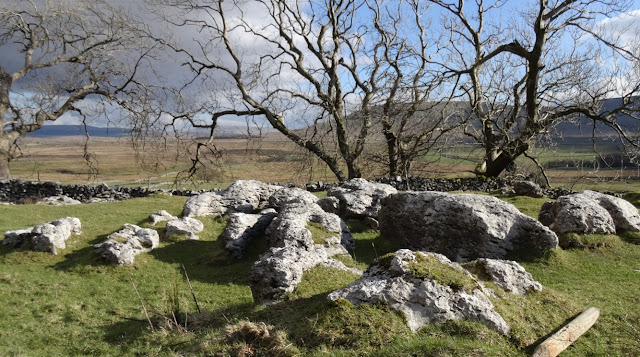 Looking back, a reminder of how unexceptional Whernside is. 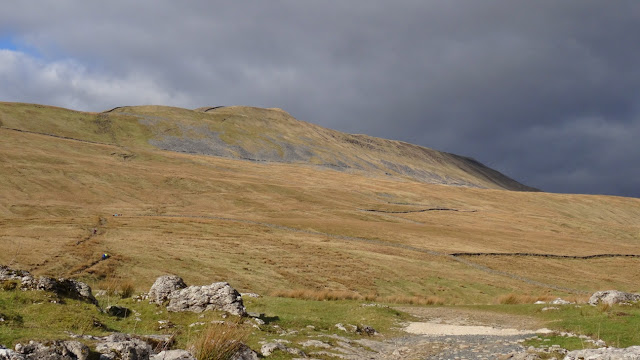 Now what's wrong with this picture?  Herdwicks in the Dales!  UnHerd of! 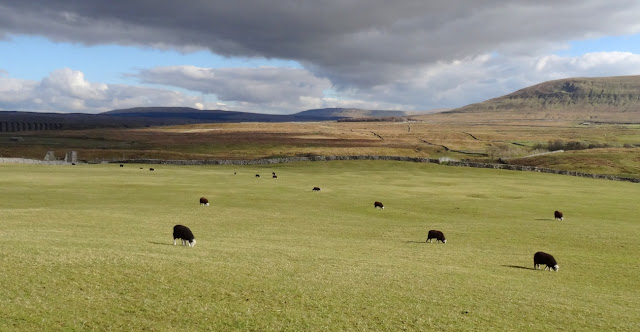 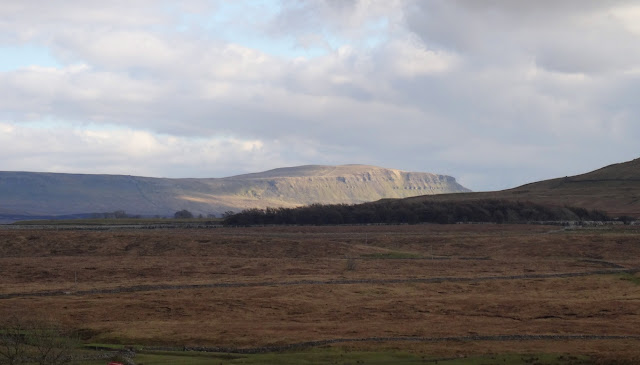 And of course Ribblehead (or Batty Moss) Viaduct. 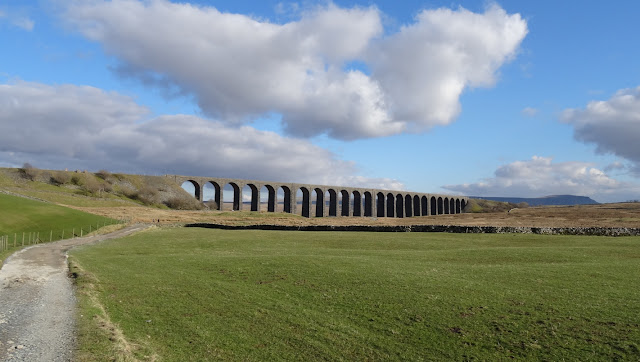 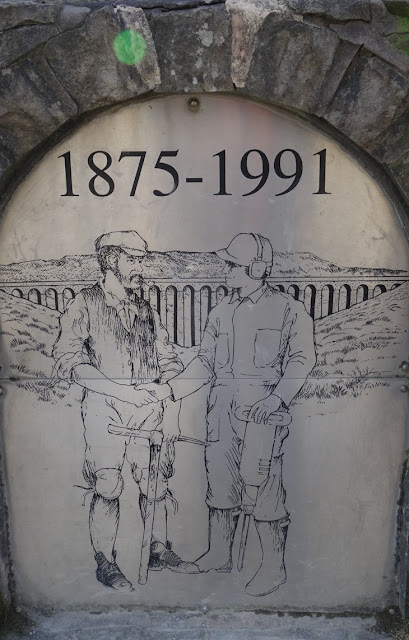 Last but not least, this plaque just in front of the viaduct.  I think it depicts perfectly how modern technology has worked with the original Victorian architects and builders to restore the Viaduct to it's former glory (all at a cost of £3 million.)

As for the walk? Peter commented that he'd never managed to "do" Whernside in such good weather before.  Not bad for February.

(You can read about a previous walk up HERE

All in all an excellent choice - 8 miles, 1590 ft of ascent and glorious views.
(And our wobbly legs had  recovered by the time we got to the car.)