Everyone agrees that Fell Runners really are completely, totally and utterly bonkers!  But luckily we met a few today, and they made the walk so much better.


Cautley Spout consists of a series of falls which tumble one after the other, combining to create the complete 650 ft high cascade waterfall. We've been before and I loved it the first time, so of course I was looking forward to seeing it again.

So today we did our leisurely Sunday morning thing and arrived to park near the Cross Keys Temperance Inn on the A683 at about 10.45.  Once kitted up, we crossed the footbridge over the River Rawthey following the well worn path up to the waterfall.  I loved the colours, rusty brown and the purple grey. 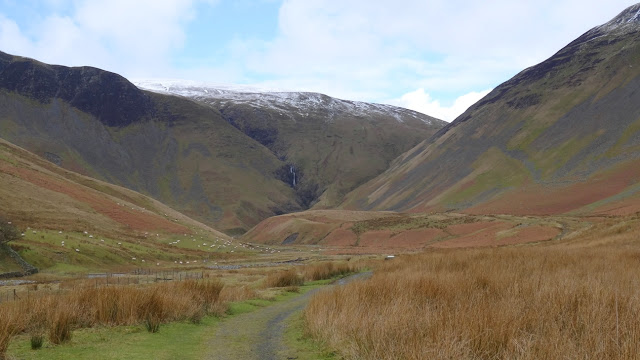 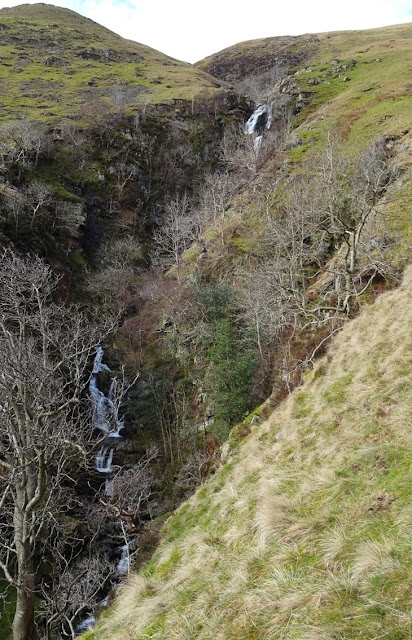 As we reached the base, we met a couple stood admiring this section of the falls.   Being Mothers Day, a fell runner had brought his mum to see Cautley Spout before taking her out for dinner. They weren't going up any further,  but he told us of a different route down from The Calf. The last time we'd gone up, we came down on our bottoms, so we thought it might be an idea to follow his suggestion. 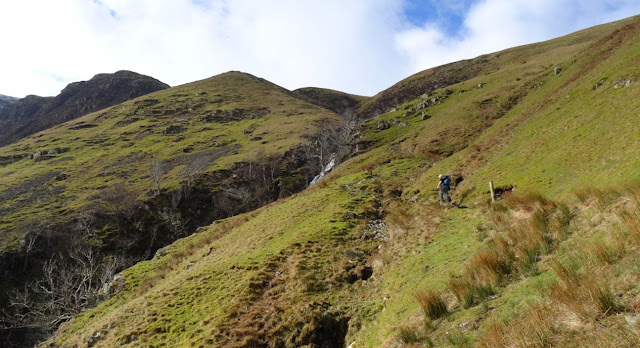 There's a path all the way up the side of the falls, What I'd conveniently forgotten from last time was how steep the climb is.  If I'd remembered, I might have decided I preferred to keep my lungs inside my chest cavity and stayed in bed!

It's  difficult to see all of the falls in one go, here's a look down. 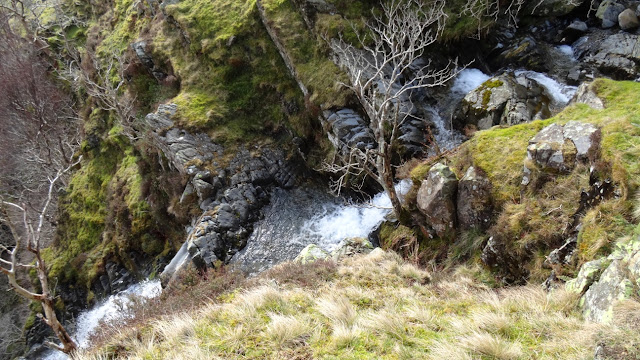 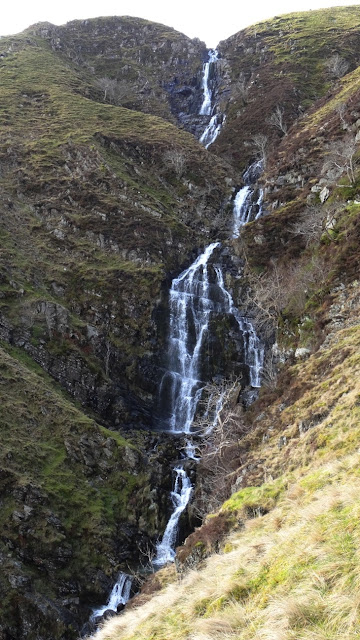 And this is about the longest stretch you can see in one go from the side.  It's the top section, I think it's about 250ft - and quite stunning.

Equally fantastic is the view looking the other way.  That's Cautley Home Beck on it's way to join the River Rawthey below us. 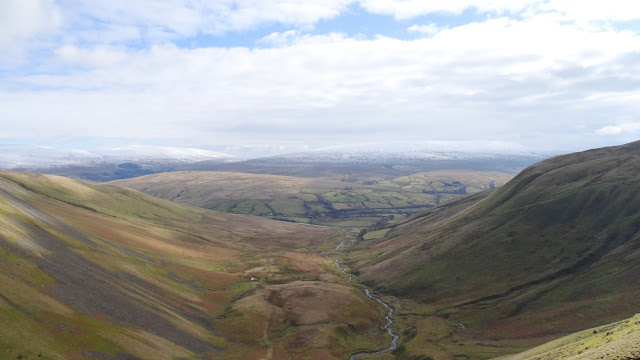 Patches of snow had started to appear by the time we reached the top of the falls.  We'd chosen to follow Red Gill Beck and the Force Gill Beck up to the The Calf.   We'd come this way last time and loved this section of the route.  This is Red Gill Beck. 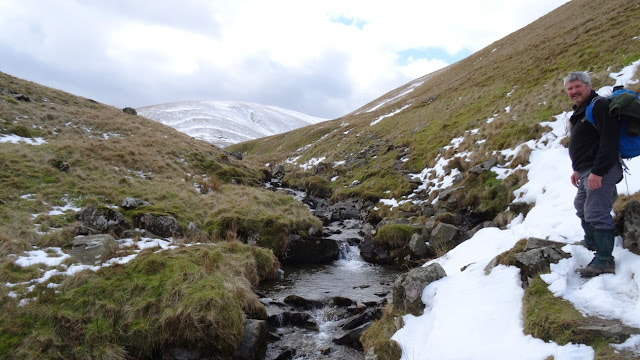 We stopped for lunch on Force Gill Beck. 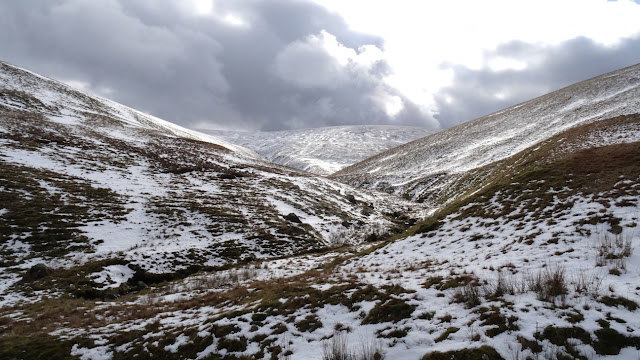 It felt so wild and isolated.  We'd not seen anyone since leaving the top of the waterfall.  It seemed like we were hidden in this wonderful empty little valley. 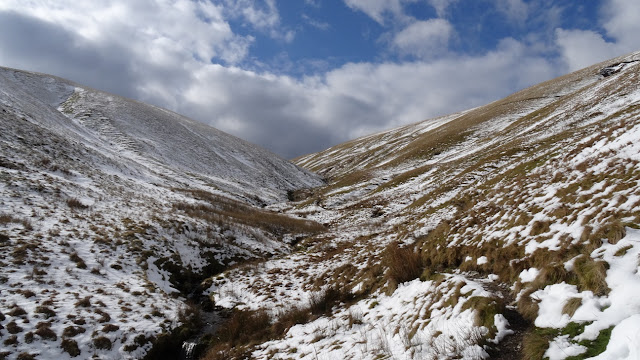 The air was cold and still, the only sounds were the bubbly gurgle of the beck and the noise of our breathing.  We didn't want to leave.  But as the sun beamed down it warmed the air enough to wake the midges.  That was incentive enough to move on.

Eventually we reached the super highway path from Calders to The Calf, and once again there were loads of other walkers about.  In only a few minutes, we reached the trig point of The Calf, (676m or 2218ft).  From here you can see Morecombe Bay and right across the Lake District. 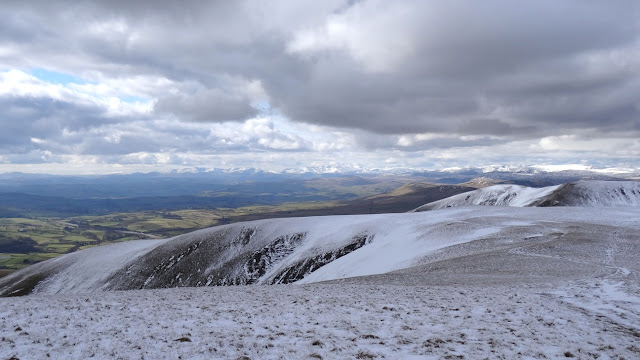 The snow covered tops made for pleasing photographs.  I like this one simply because of the curves in the hills and the way the sun plays on it. 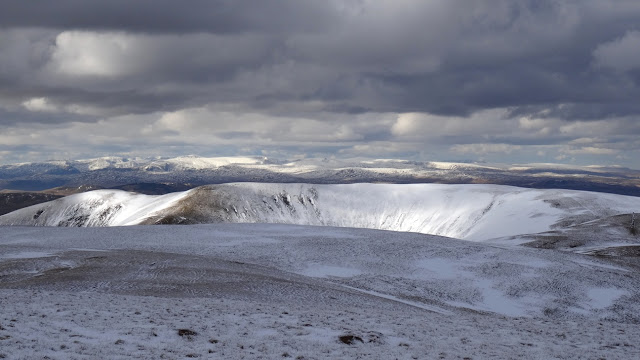 Following the earlier advice of the fell runner, we followed the ROW down to the bottom of glacial valley of Bowderdale.  Fortunately,  a few more of the mad fell running society helped us out again. Because fell runners like to use the same routes as they train, they get to know them very well and can follow them even when there is thick snow on the ground as today.
As we were walking down  a couple of runners were coming up and it was their footprints that showed us the way down, otherwise we'd have been scuppered!  We could have used Gizmo, or even a compass to work out where the path was, but fell runners are so much better. Thanks guys, whoever you were.  (In all honesty, I am in awe at how fit these people are.)

Apparently the Howgills are older than both the Lakes or the Dales, and the reason they are so curvy is because they are made of a particularly hard gritstone that wears away evenly, but the valleys are glacial, which is why the sides are so steep.  That explains it all then dunnit!  This is Bowderdale. 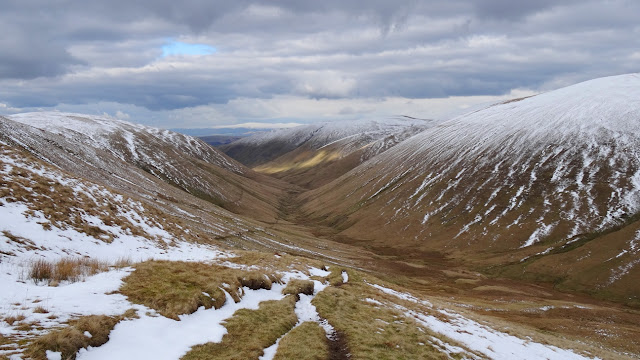 Where  Rams Gill meets Bowderdale Beck we turned South to walk updale to Bowderdale Head, the watershed where everything north runs into Bowderdale, and everything south runs into the Cautley Home Beck valley.  From here, you get a final look at Cautley Spout before a steep descent into the valley and back to the car.  6 1/4 miles and somewhere around 1700ft of uppydownyness

We'd planned to do the same walk as last time.  But our map of the route we did last time was wrong, because we'd gone the wrong way, so we had to remember where we'd gone wrong, so we could do it again.  And then today we went a different way again, so that we didn't go the way we went last time at all, and our route map showing the new wrong way was wrong again.

But never mind, we found our way home in the end. Click on this link here to read about our last visit to Cautley Spout