So, after four weeks cruising followed by a couple of weeks eating any amount of greasy pies n pizza's I'm really beginning to feel slobby and unfit. I need to get back into walking but as usual I don't want to drive far, and anyway, the days are getting really short so curtails things a little anyway.


So I decided on a local walk and to investigate areas I've not ventured into before - Jervaulx Abbey sort of piqued my interest. The site promises tea rooms, which seemed like a perfect rest stop. So I worked out a circular route from East Witton
An overcast day in November isn't usually the best time of year to enjoy the countryside, but the walks had its points of interest nonetheless. Here are the pictures.
From East Witton I headed North towards the River Cover, a relatively uneventful part of the walk, unless you count the gates and stiles........  And I did.  There were eight of them by the time I got to Cover Bridge.
Crossing the road, I followed the River Cover until it met up with the River Ure. 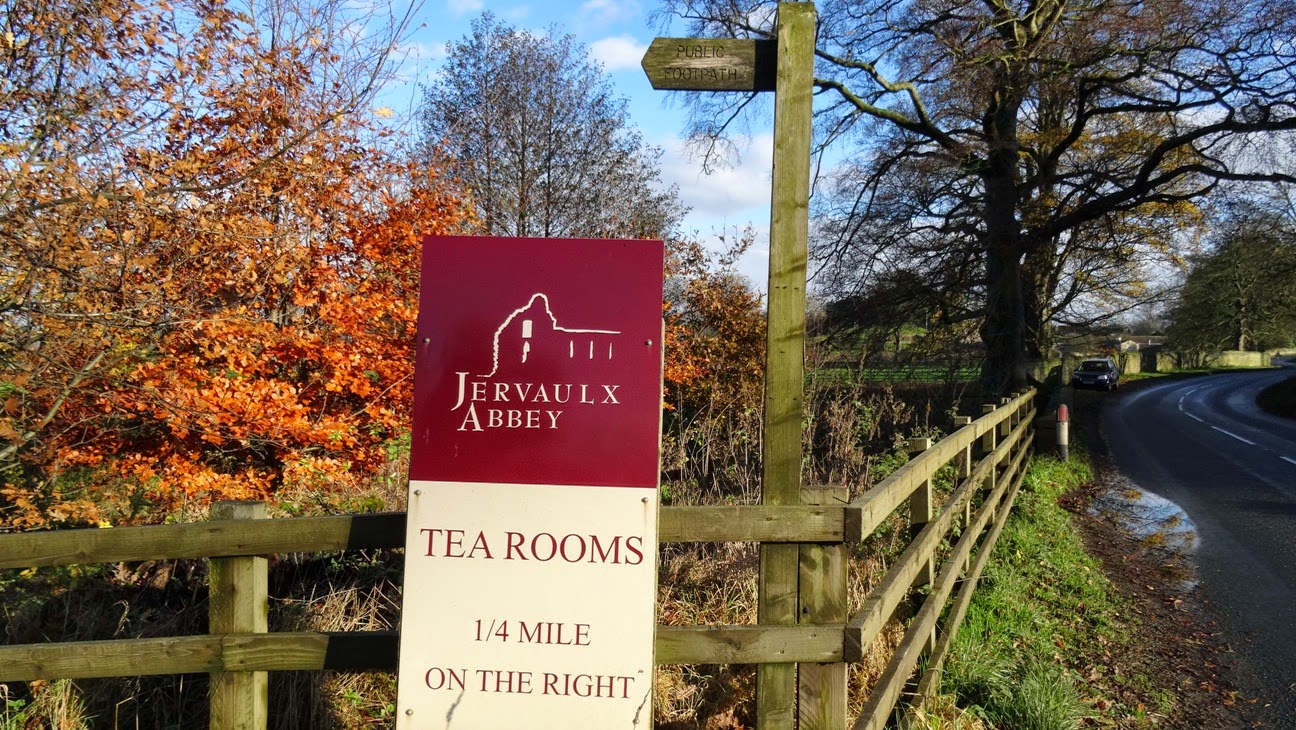 The right of way comes to a fence and you turn right towards the A6108  and this sign.   Looks good dunnit?

I walked along the road for 1/4 mile and found the tea rooms.

Sadly, they were closed.  Out of season I think.

But I crossed the road to take a look at Jervaulx Abbey, duly dropping my pennies in the honesty box (They ask for £3 per adult).
I ate lunch on a bench next to the Willow, (keeping an eye on it like), before taking a walk around.  It's a nice little place.  Very pleasant, and from the literature, full of flowers and plants in the summer.
I left the Abbey to walk across Jervaulx Park, some of the trees lining the track were glorious.

After Jervaulx Park I walked up Masham Bank on the A6108.  Not recommended!  There is no path or bit of bank to walk on, and oncoming traffic won't necessarily see you due to hills n bends n stuff.  If I was to do the walk again, I'd find another route.

From Masham bank I made may way across to Quarry Hill and then Ellingstring.  I was aiming for Hammersdale Farm, but I missed.  Mebbe I should have got Gizmo out!  No matter, I ended up walking through the village, which is very friendly, people chatting and asking how far etc. etc.

First thing I know is that he's right behind me making weird huffy noises.  Now I know there has never been a story of someone getting killed by a four legged ball of wool, but I really didn't need to be head butted out of a field by a territorial sheep, it would be VERY undignified.  So I'm shouting at the little beastie to clear off.  He ignored that of course, and kept following me as I backed away. I took off me rucksack and waved it at him, which seemed to confuse but not deter him.  The gate into the next field was wide open and as I got through it  to push it shut, a very attractive little ewe, (well, he would have thought so anyway), trotted over to catch his eye.  He immediately forgot I existed and wandered off and head butted her a few times instead......  Phew!

So after that little adventure, I continued on alongside and through the woodland.  At one point I saw this:
Now what I should have explained at the start of this post is that I started a lot later than planned..... like about 11.30ish.  That in itself isn't too bad, except I dawdled and pottered and took loads of foties, (like the arty shot earlier).
So I was still walking when it got dark.......
Not that I was too worried, I knew that the rest of the route was the track that you can see in the fotie above which led onto a road back to East Witton.  And like a good little girl guide I also had a torch, and a head torch, and I'd tested them.

A good walk, and it turns out I am going to do much of it again soon.  Class.