A few folk from the Walkers Forum decided to visit Yorkshire en masse, and Masham in particular. (It reads like “mash am” but you’re supposed to say “mass am” apparently.)  They booked into a church conversion and planned a couple of walks in lower Wensleydale (amongst other things, but I won’t go into that).

Saturdays walk started with 10 of us launching from Lofthouse o'er In Moor and down t' Scar House Reservoir.  I say launched, we didn’t really.  We sort of wandered and ambled, taking a look over the bridge at How Stean Gorge while we were at it. 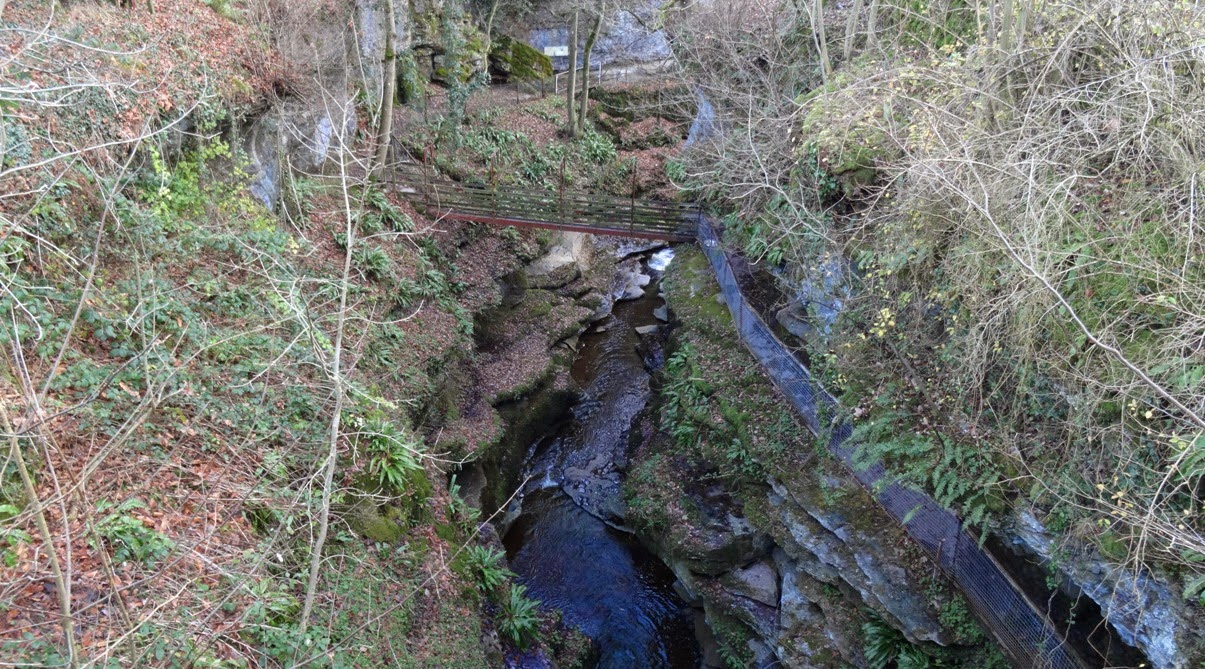 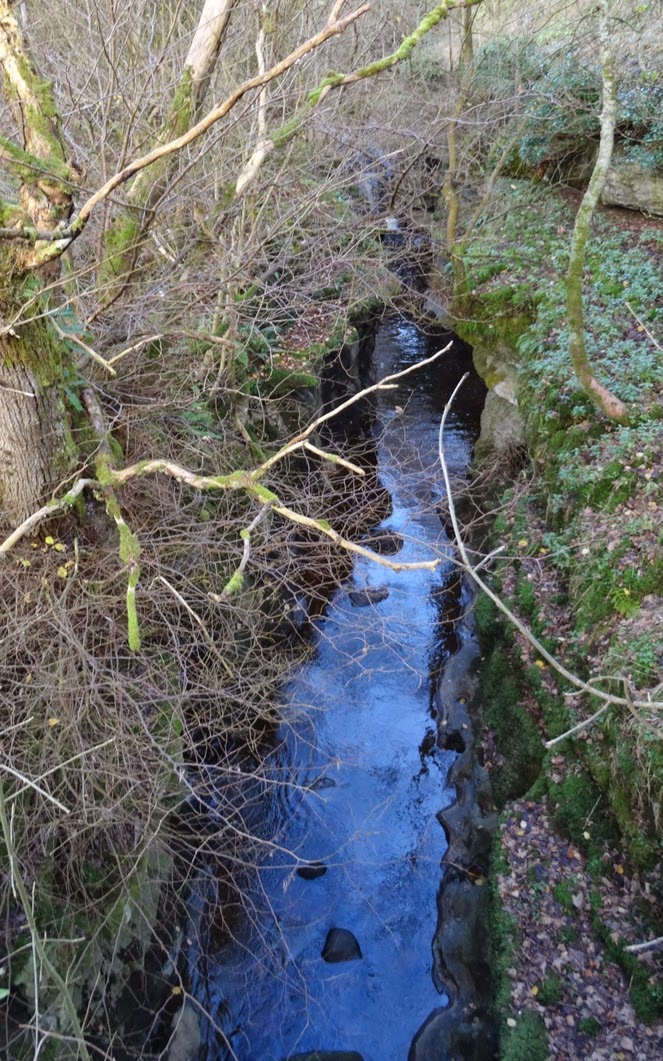 I thought How Stean Gorge must be what The Strid would look like without any water, mebbe not quite as deep, but interesting anyway.  The group didn’t do the How Stean Gorge tour, that would have cost £5.60 each.  Mebbe me n Peter will do it another day.


The dogs on the walk were Lexi, Sylvia, Stacey, Flash and Frankie.  Sylvia was having a couple of hormonal days and behaved like a total tramp, constantly swinging her hips at Frankie.  Poor Frankie, he had Sylvia presenting her assets to him all the time, and Rich his owner shouting at him to stay away.  Not a good day for a boy dog.

The wonderful thing about Middlesmoor is that there is a public loo (near to the pub).  That's one to keep in mind for the future.  It's also got a little car park, just right to start a walk from.
We'd been stripping our layers off as we went uphill.  But it wasn't long before we put them on again, it was blowing a freezing wind from the the North at us.
Despite the sun the mud and puddles on the track down to the reservoir were frozen, so it was careful down the bank to reach the dam, diverting left to reach the bunk barn and loo block.  There are also picnic tables and a wonderful giant bus stop big enough for all of us to sit out of the wind and eat lunch.  Luuuuurrrrvly.

We took advantage of the loos and then made our way across the dam.  I've been here before, so the next couple of photographs are from a previous walk - cos the dam looks better with water flowing over.  (There was none today) 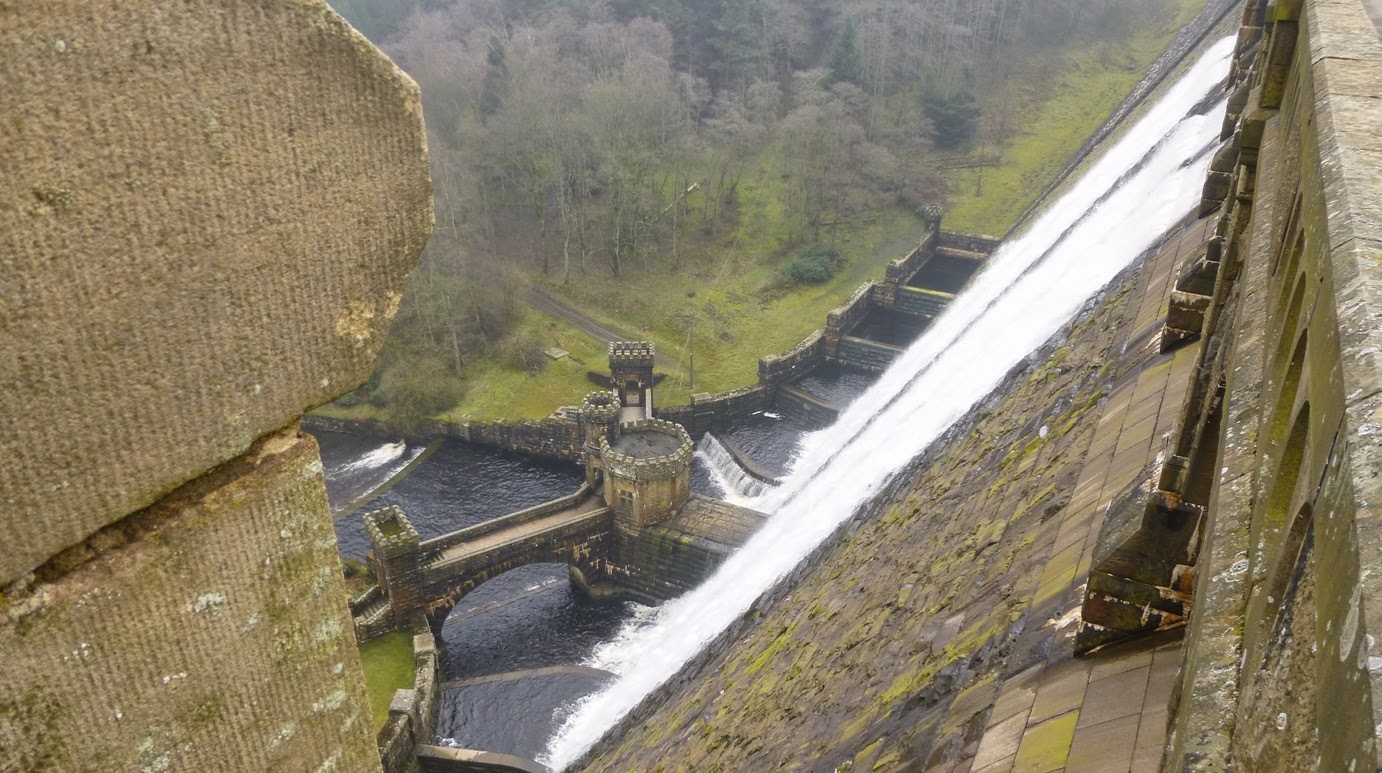 We crossed the dam (into the wrath of a belligerent photographer) who was taking pictures of fell runners on the Nidderdale Frostbite Marathon (34 miles!! I'm shattered thinking about it). Anyhoo, we was pootling along, enjoying the views over the sides of the dam, chatting away etc etc, and moving out of the way of the fell runners as the passed.
Thing is, we didn't move out of the photographers shot, and he was not happy about it.  He made lots of rude and snotty comments to our group as each of them passed him.  He got a few back too!
Sadly the blue skies disappeared, and low misty clouds came and blurred out the sun. On the other side of the dam we walked along along the top edge of the valley before dropping down to Bracken Ridge and getting back onto the Nidderdale Way.
From there it was down to Limley Farm, were we encountered a lot of men with guns.  They also had dogs and beaters, which hopefully meant they were out on a pheasant shoot!  At Limley Farm the river disappears underground, making it dead easy to cross.  Like the last time I came this way, we missed the Nidderdale Way that follows the river back to Lofthouse, and we ended walking along the quiet road on the other side of the river.  Not really a problem, but I’m getting a bit frustrated by that ROW now, I’m going to have to go back and find it.  StevetheTree suggested I start at the other end.  What a brilliant idea!

Once back at Lofthouse, it was into the Crown Hotel for a refreshing something before going home.  An unusual establishment,  It doesn't sell tea (much to Bob's annoyance), and there isn't a gents loo inside.  From what I could make out, the lads were sent outside to a sort of brick shed, except it didn't have a roof, or lights or anything but a trough to pee into.
You can see it on this view on Google Earth, the hotel is on the right, and the outside loo is on the left,  beyond the cars. The outside karsey
Luckily the ladies were treated slightly better and could stay inside in the warm.

So that was our Saturday walk, 11 miles which I thoroughly enjoyed. Tomorrow we have another walk starting from Jervaulx Abbey, and the weather is going to be good too.  How class is that!