You know how you get an idea which you dismiss.  Well, it doesn't go away does it?  It sits there, skulking around the corners of your mind.  You might brush it away every time it seems like it's going to be a positive thought, but it never really goes anywhere.  It just lingers............

Well this was one of them idea's.  I'd sort of looked at it as a maybe several times, and dismissed it nearly as many because I didn't think I could do it.  Except the last time.  The last time I looked at this idea, I decided it might be possible after all.

Hmmmmmmm.  Mebbe I should have left it in the "not possible" pile!
The idea was to walk to Marske from Richmond and back, but I wanted a circular route.  There aren't any easy or obvious rights of way to make this possible.  But this last time, I really looked at the OS map, I studied it for some time and finally thought I'd worked it out.  I managed to fill in a missing piece of the route using old quarry tracks and a short dash across some MOD land

And you never know, the route I'd planned might have been perfectly acceptable, legal and interesting.  Except I sort of went wrong in the middle - at the missing piece part - so I have no idea if my carefully planned route was a good idea or not.  What I can say is that the route I actually walked was a bad idea.  So there you go, at least I learnt something.

Actually, I learnt a lot.  I don't usually follow the coast to coast route west from Richmond, so I learnt what I'd been missing.  The meadows and scrubby land are absolutely gorgeous, and full of plants and flowers I'd never seen, so I had to learn the names of them all.  I also learnt that my camera needs changing.  It's never been quite the same since I dropped it into a load of water (the LCD screen sloshed!), and then dropped it onto the pavement, oh and then dropped it onto the pavement again.  (Crunchy plastic bits!).  I learnt that I really ought to take more care of my navigational aids, (losing the map and then having the batteries die on the GPS is not helpful), and I learnt that some hills are just too steep.

Leaving Richmond and heading west along the Coast to Coast route following the farm track past Whitcliffe Farm and High Leases, there are loads of flowers in the hedgerows.  Brightest of all is the Meadow Cranesbill. It's parent to many garden varieties of hardy geranium. 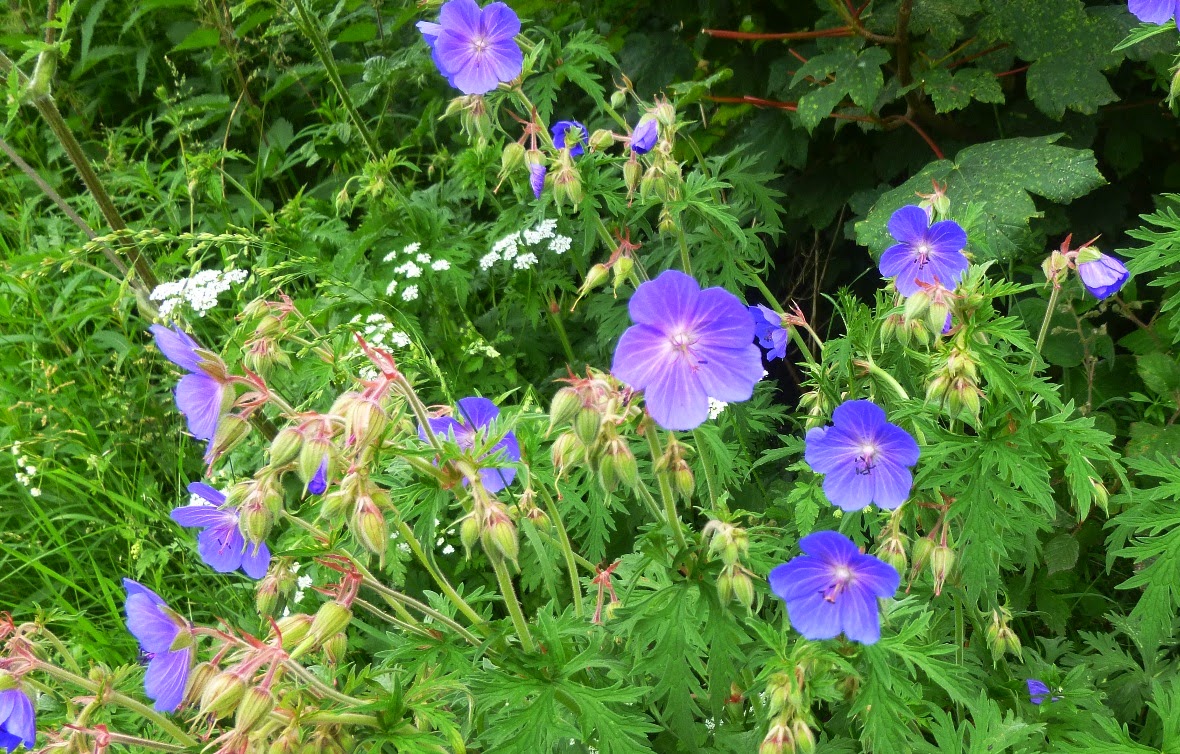 I love how prolific it is, and how you can see it in all the hedges and roadsides across the north.  Such a gorgeous colour.

Once past High Leases you're into Whitecliffe Wood.  Full of birds and squirrels and buzzing, busy flying insects.  I have to admit I'm not a great fan of things that buzz close to your ear and around your head.  I was pleased to see this though, since I've never seen one before.
It's not that common in the North it seems, so perhaps that's the reason I've not seen one before, or maybe I've just not been looking.

Out of Whitecliffe Wood and on towards East Applegarth you are surrounded by rough meadows on the banks under Whitcliff Scar.  And the flowers were amazing, with many that I haven't seen before.  Not least the Common Rock Rose.  I would have posted a picture, 'cept my camera doesn't handle yellow very well.  In fact, the white balance on it is really poor.  I've learnt to compensate when I get the pictures on the computer....  But I can't fix the yellow! 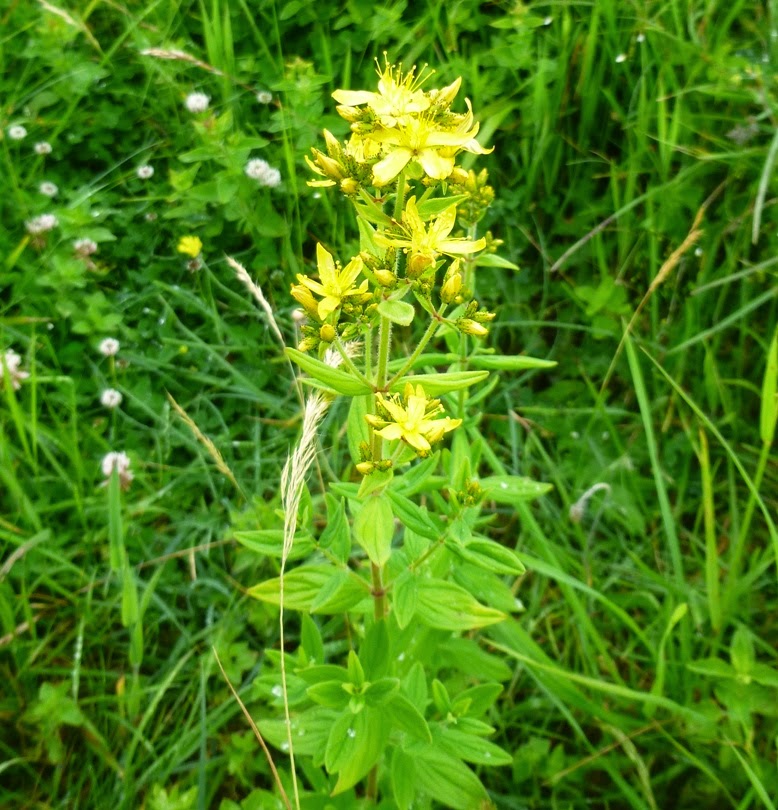 Apparently people used to hang pieces of the plant over religous icons to ward of evil on St John's day.   See, another thing I've learnt.
As I walked east, past all the Applegarths I continued taking pictures of all the flowers.  One of my favourites has to be the Musk Thistle.  The first time I every saw one was on a walk toWilliance's Leap.  I was amazed at the beautiful spikiness of it. 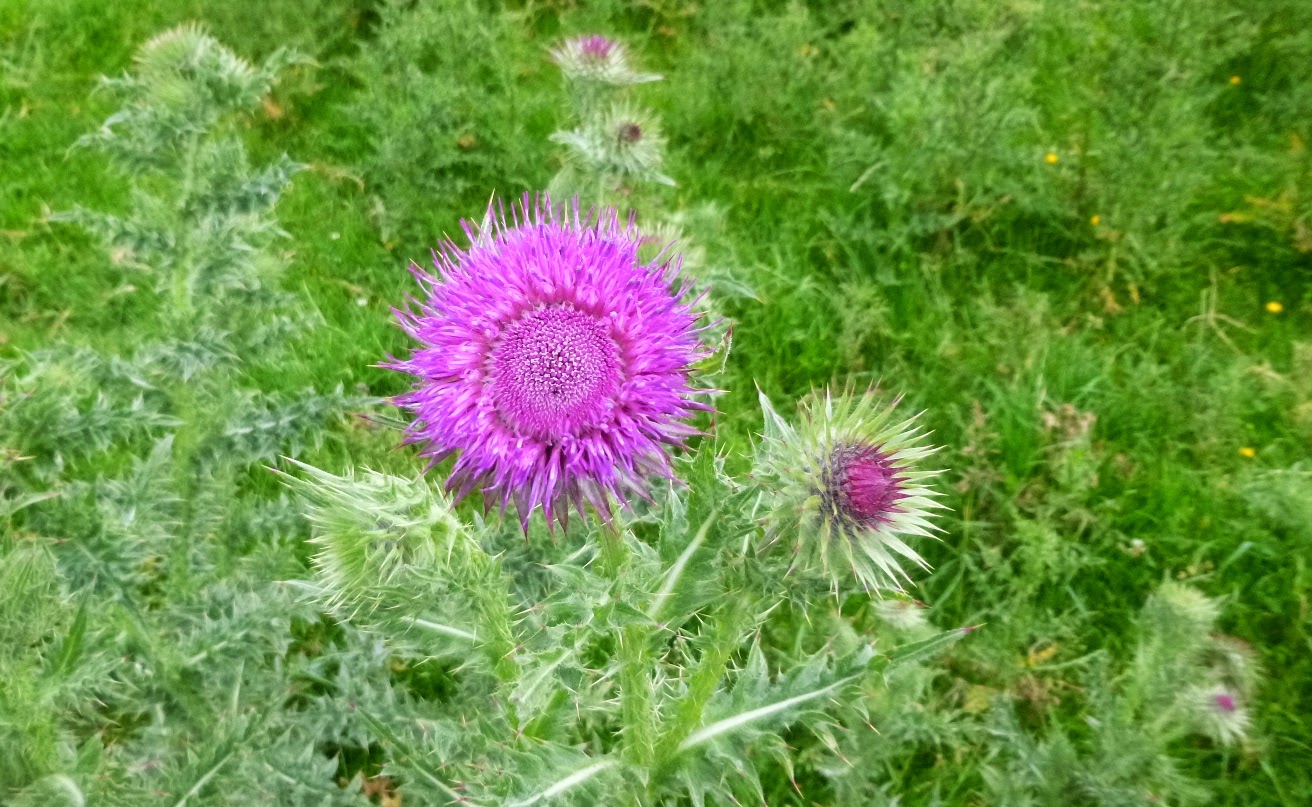 It's big, and colourful and spiky and has this curious spider web effect on the flower.

I really like this plant, but apparently it's an invasive species in other countries, even declared a "noxious weed" in some US states.

Funny enough, despite the thistle being the national flower of Scotland, this one doesn't grow there.
I also got to see a hare.  The first I've seen around here.  I was made up.

A little further along a cairn marks the path leading off the track and heading towards Marske.  I nearly missed the path tho' because someone was camping alongside the cairn.  It turned out to be an American from Tennessee called Israel. 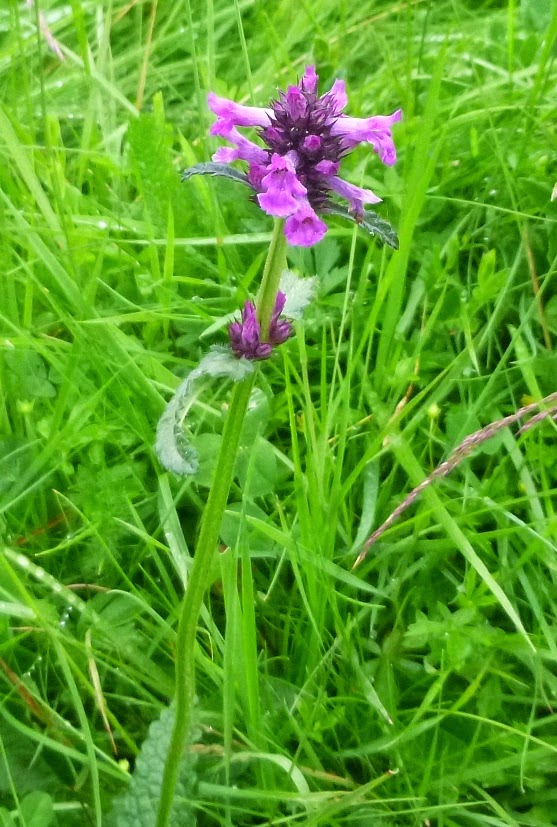 This is wild basil.  I nearly overlooked it completely, it's quite unassuming.

Just after taking these pictures, I realised I'd lost my map. Frustrated, I turned back to walk across several fields to see if I could find it.  I didn't, but what I did find was Israel.
I'd said a brief Hello when we'd met at his tent at the top of the path.  It turned out that Israel was heading for Reeth, with the aim of watching World Cup in one of the pubs there.  We walked together towards Marske, chatting along the way, he asked me about the route to Reeth from Marske and I managed to give some directions which turned out to be right. (Get me!).

At Marske we parted as I turned south east down Cat Bank heading for  Downholme Bridge.
Turning onto the footpath across the fields, I was delighted to see my second hare of the day.  And this one posed for photographs. 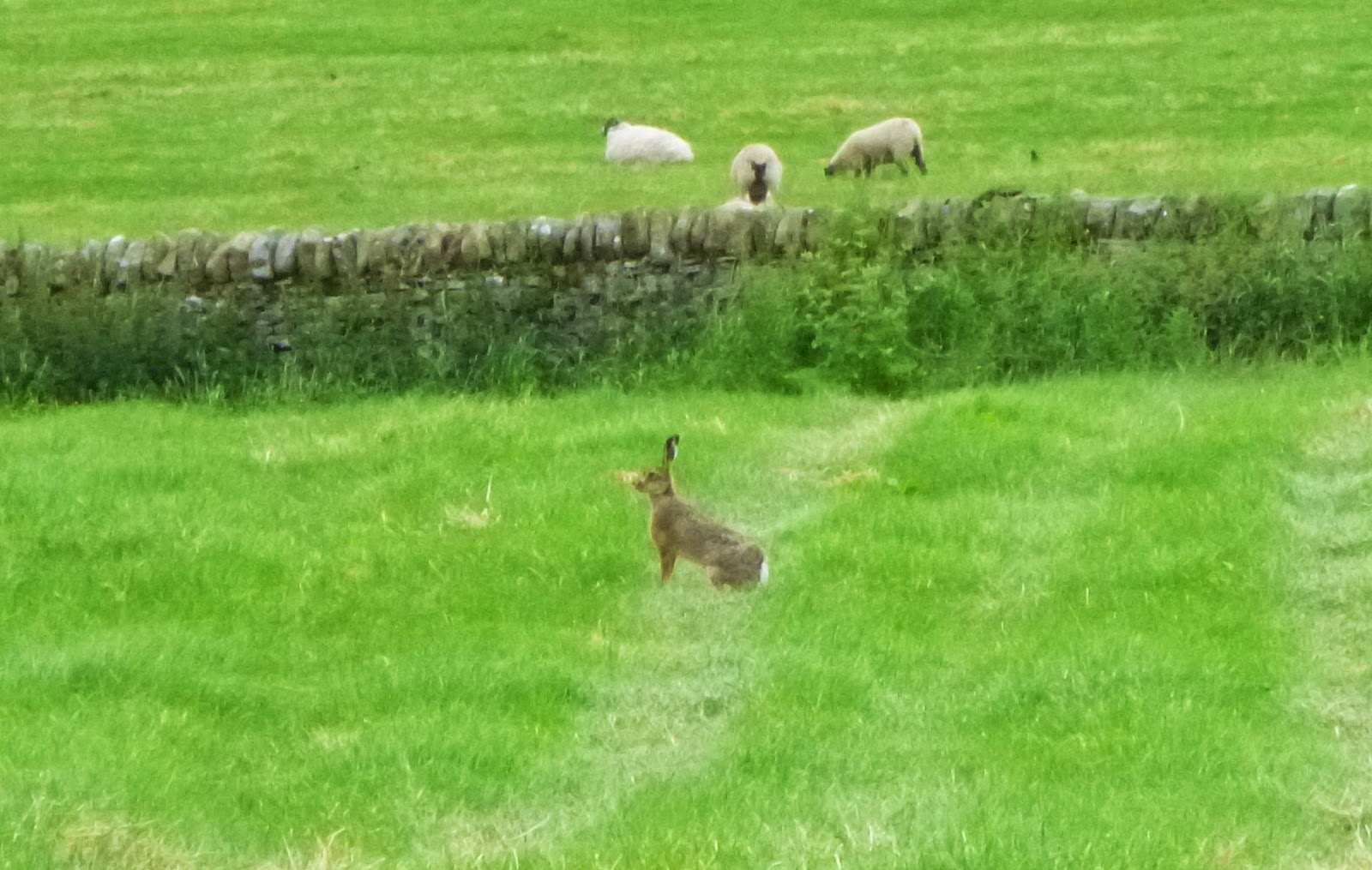 I've lost my map, but I still have Gizmo, the GPS, and a good sense of where I am.  I can also sort of remember my planned route.  Once across Downholme Bridge I turned left for a little bit of road walking, heading for the disused quarry alongside.  Just past the quarry, there should be a bit of a track heading up the sides of the cliff.

And this is where I went wrong because I turned off the road too early.  I found the quarry all right, but had real difficulty getting up the side of it, because there wasn't a track. It was excessively steep, and took me a couple of attempts to get up the near vertical path.  All good fun eh?  It certainly got the blood pumping that's for sure.
I couldn't help noticing the flowers though, despite the noise of the blood pumping in my ears.

Once at the top of the quarry, I had a bit of difficulty finding my way to the road between Downholme and Hudswell.  I knew which direction I should be heading, but I got confused with a permissive right of way, and the road just didn't seem close enough.  I was using Gizmo to keep me right, and then I heard the battery warning noise.  O oh!  I had to turn the GPS off, and rely on my sense of direction.

I found a couple of tracks not marked on the OS map and followed them to the road.  Now it was a simple case of getting to Hudswell, and from Hudswell to Richmond. 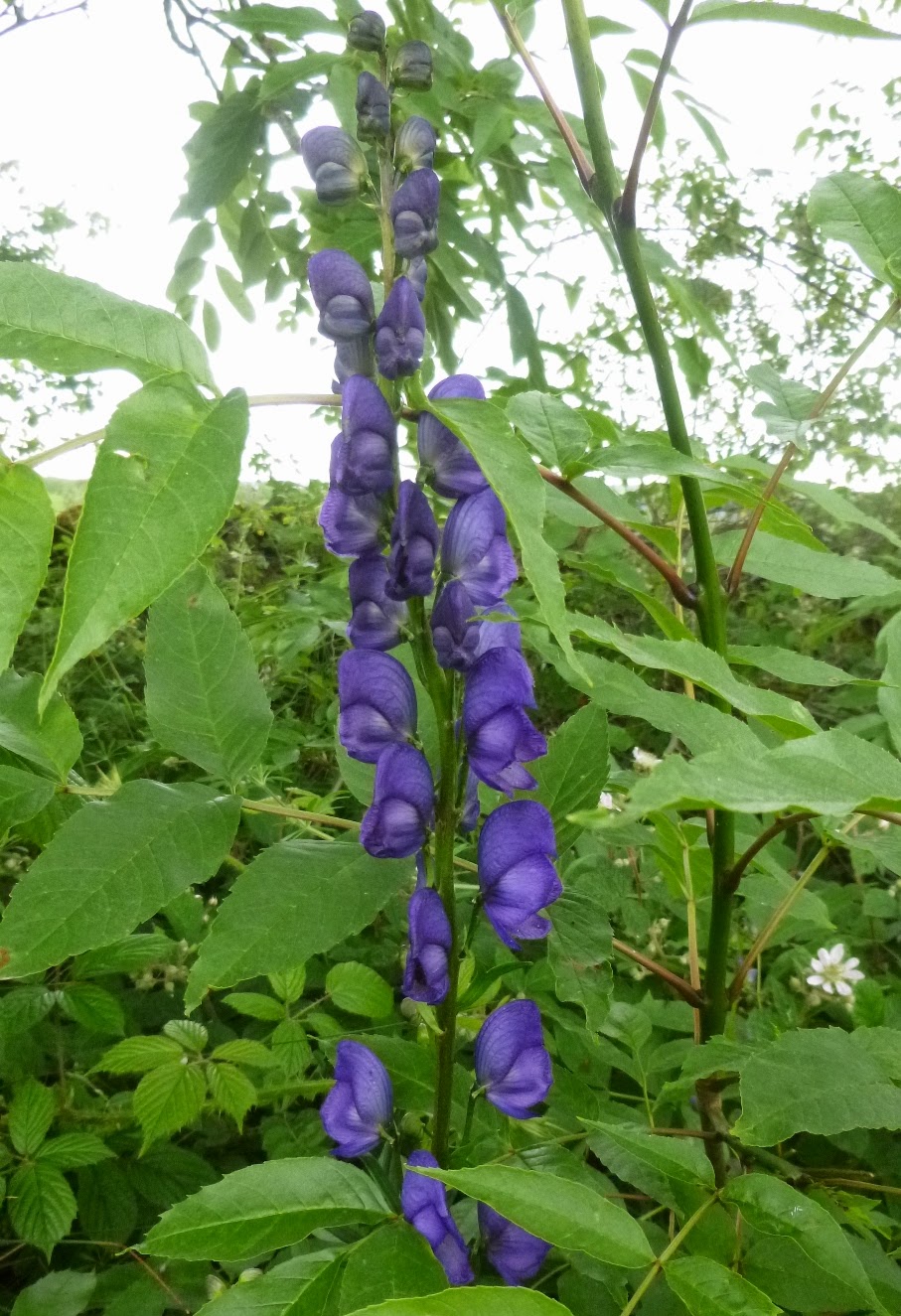 As usual I was all eyes and ears as I walked along the road.  Because this is MoD land used for training, there isn't much human activity across it.  The wildlife is left alone to do whatever wildlife does.  This means you get to see all sorts if you're quiet.  And lucky.

There were a few plants in the roadside ditches that surprised me.  It looked like someone had just chucked their garden plants out the car window, and they'd taken route.  The most dramatic of these that I found is the Monkshood plant. Despite being very lovely to look at, it's also highly toxic and can be used as a poison. Even handling it can cause problems: Killer Plant - Monkshood

So there it is, loads of it, growing beside the road. Scary eh?

I reached Hudswell and turned off the road following a footpath that would eventually take me down to the River Swale.  It was well overgrown along here, but it didn't take long to get to the 400 steps that lead down to Lownethwaite Bridge, and eventually the river itself.
Nearly home, I followed the river until I reached Richmond Bridge, also known as Green Bridge to the locals.  I crossed and took my favourite route up the hill which is a set of steps underneath the castle.  And guess what?  More strange flowers for me to photograph. 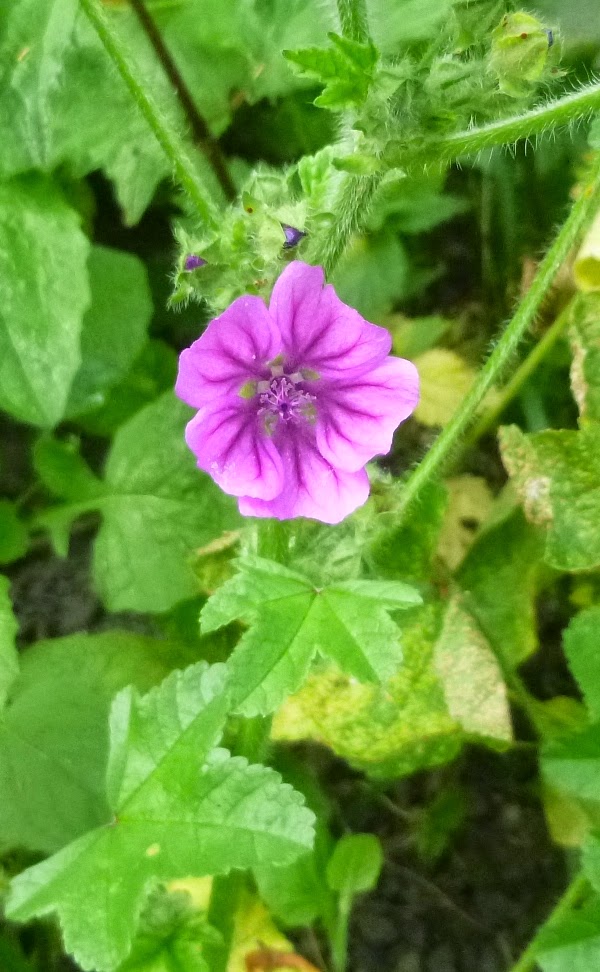 Common Mallow.  What a nice name. It makes me think of marsh mallows, and I love eating them.  The flower is very pretty too.

And then I was home.  Footsore but satisfied.  OK, I didn't quite do the route I intended, but lessons have been learnt and I know where I have to go next time.  Here's the map. I did 12 miles in the end.

Tomorrow I've got a walk planned from Bolton Priory.  I'm really looking forward to it.