Click on any picture to get a full screen version.

I'm thinking I shouldn't have walked so far yesterday, cos today I've set meself up for an 11 mile walk in Wharfedale. And I can't back out of it, cos I posted the walk on the Walkers Forum and agreed that a guy called Ed was gonna join me on the walk. I hope I've got the energy!

Today's walk was a mix of two I've walked with Peter.  I have good memories of them both, and it seemed a brilliant idea to work out a route to combine them.  Ed was in for a treat.

So we met at the Bolton Abbey car park, and we started the day with a good old chunter.  It was £8 to park for the day! I mean......  EIGHT POUNDS!

After we calmed down, we sort of supposed the money for the parking paid for the upkeep of area, so mebbe it wasn't that bad after all. So, chuntering completed, feet booted and backs packed, we set off.  The first port of call was Bolton Priory
From there, we crossed the bridge headed North along the Dales Way and alongside the River Wharfe.  At Posforth Bridge, we turned away from the river and headed up to the Valley of Desolation, so called because of the damage caused by a storm in 1826. As you can guess, Nature has more or less repaired it now, and it's not very desolate at all.  In fact, it's quite pretty.

There's a waterfall on Posforth Gill here. It's not named on the map, but it's well worth the diversion off the main track to go down and have a look.  You have to keep an eye out for the path leading down from the left though.  Don't be too busy chatting to notice you've walked past it, (like I did!)
From the waterfall, the path leads on through bracken and mare's tail into a tree plantation before you break out onto the moor.
The track is easy to follow, Ed and I chatted, enjoying the surroundings and the various little animals that made themselves known to us. 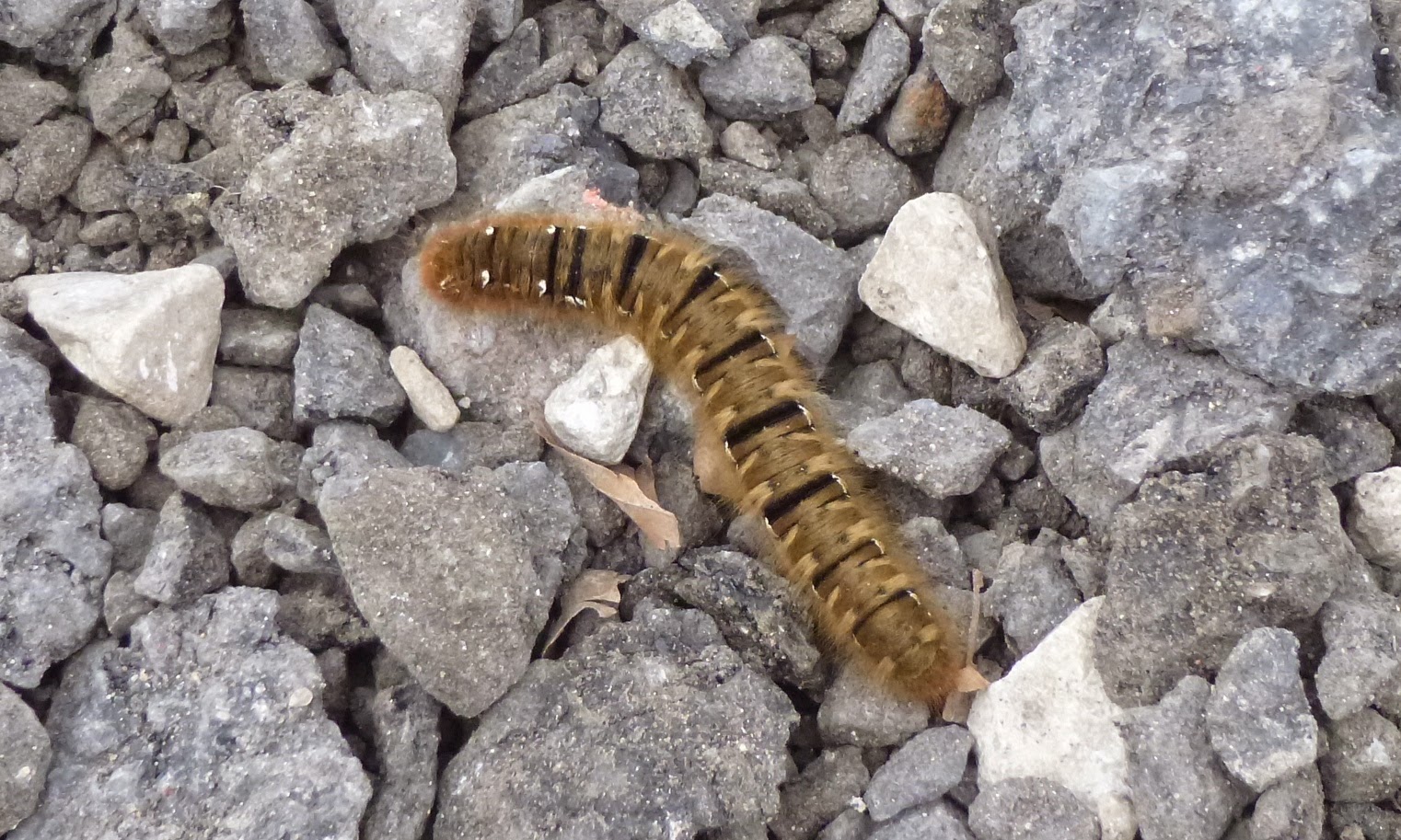 This is the caterpillar of the Oak Eggar Moth.  We saw quite a few of them as we walked.
The wide clear track took us across the moor, a fantastic place to be - all open and windswept.  Nice on a sunny day, not sure I'd like just how windswept it could be on a miserable wet winter one.  The rock formations around added interest. 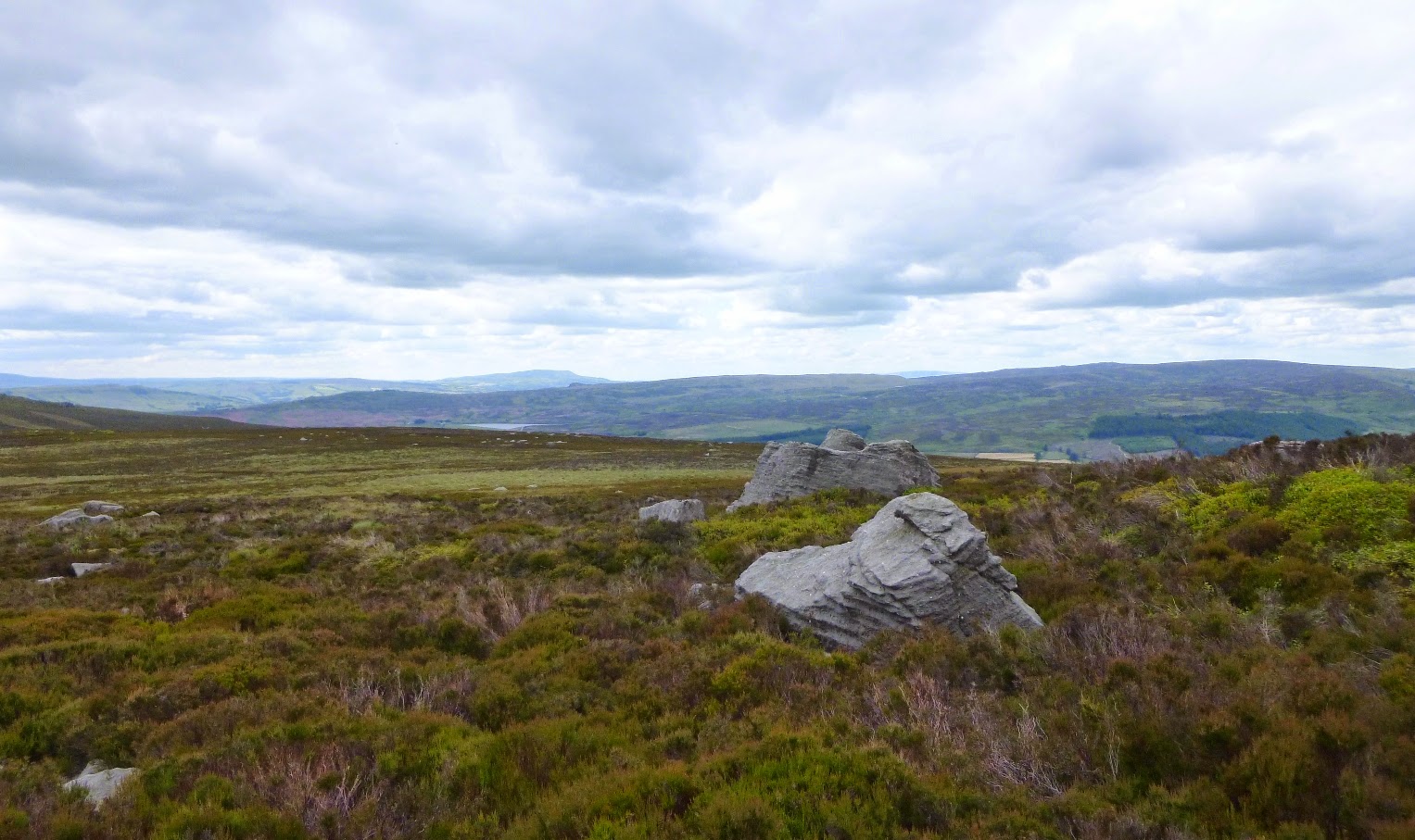 Funny enough, even though we were heading for Simon's Seat, I never took a picture of the pile of rocks that make up the landmark.  Doh!

I did however take a couple of pictures of the view from the top.  This was our lunchtime view.
The wind was biting cold, and by the end of lunch we were both well wrapped up against it.  Time to move on though (and go the wrong way).  We set off for Flask Brow and our route down the hill back to the River Wharfe, but ended up walking back to Truckle Crags?  We had to turn around and retrace our steps. In my defence your honour, it was easy to miss the path going the other way..... despite it being about 10 foot wide!
Anyway, we reached the lovely wide track going down through the woods to Howgill. 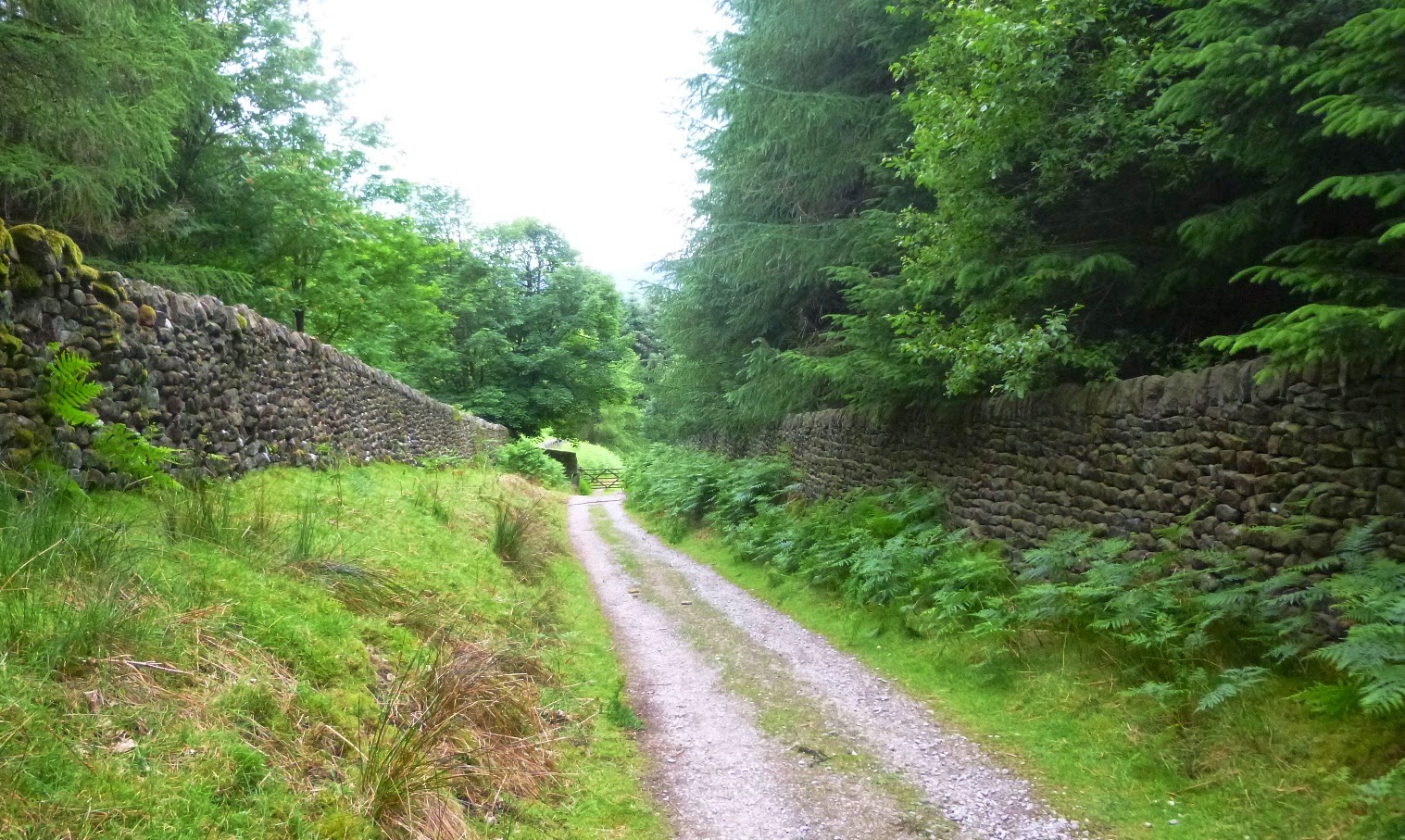 Once we'd reached the little village, we followed a lane past a little cottage type house with a glorious garden overflowing with flowers.  And it really did overflow.  We think the gardener must have planted up the lane too - it was full of all sorts of colours and smells.  Really really lovely.  There were even gooseberries growing!  It's a shame we don't have more people who do that sort of thing.......  and less people who'll trash it.

We reached the Wharfe and turned to back along the river and the Dales Way towards our cars.  Some of the path is narrow, single file only.  But when it opens out - it's beautiful.
Sand Martins skimmed the river after insects, and the sun was bright and warm.  What more can you ask for?

Further along, a little way past Barden bridge is another, unnamed bridge that has always puzzled me.  As well as it's dramatic appearance, it's really quite big for a pedestrian bridge.  How come? 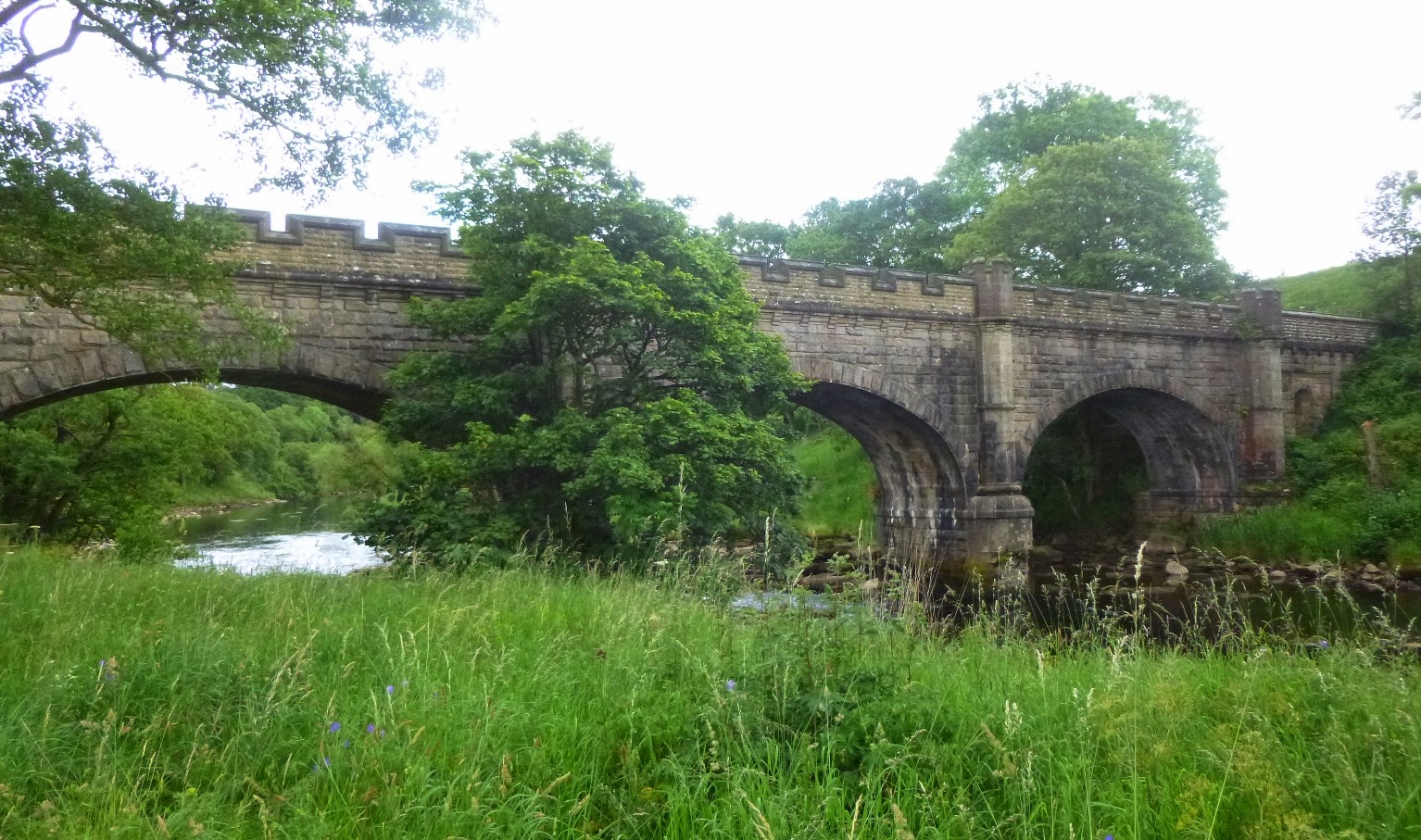 Well, I Googled it.  It's not a bridge really.  It's an aquaduct, with the added bonus of a footpath. Class eh?

The next landmark for our walk is The Strid.  A place where the all of the water from the River Wharfe is confined into a gulley so narrow it looks like you could get across it with one big stride.

The water bubbles and  boils through the gap.  How deep is it I wonder, to be able to take the flow of the river into such a narrow space?

It looks so innocent here.
Not a good place to fall into though, I'm sure.


The Strid gets its name from the Anglo Saxon 'Stryth' meaning Turmoil or Tumult; corrupted into Strid, from the possibility of striding across the channel.
A little more walking and we reached "the Cavendish Pavilion, Riverside Cafe Restuarant".  Well that's what the Bolton Priory blurb calls it.   For us it was a convenient loo stop and the place for Ed to buy his compulsory ice cream.  Of course I couldn't let him eat one by himself, now could I?

Now we were on the final stretch, alongside the river a little way, up to the road and our last photo stop of Bolton Priory 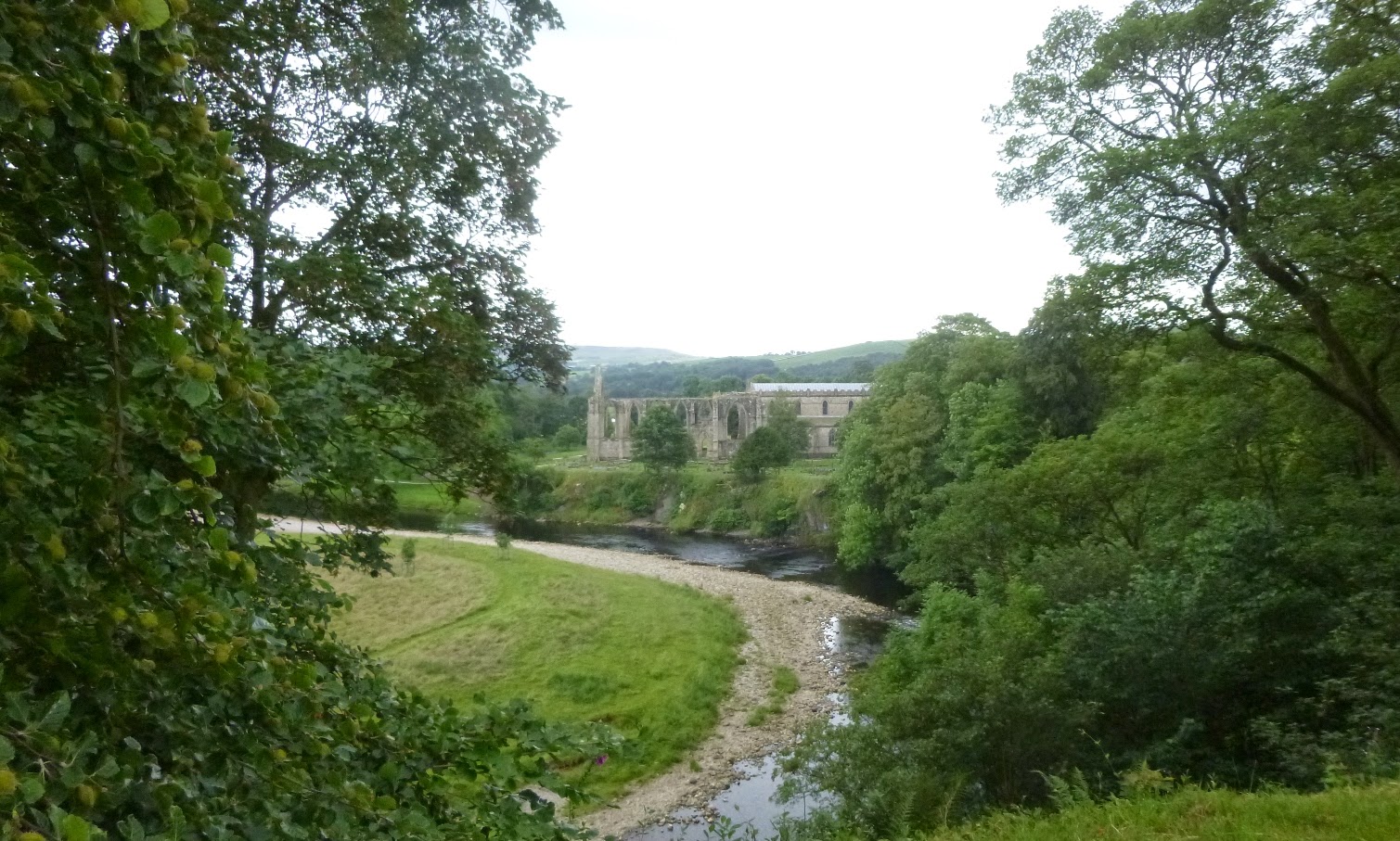 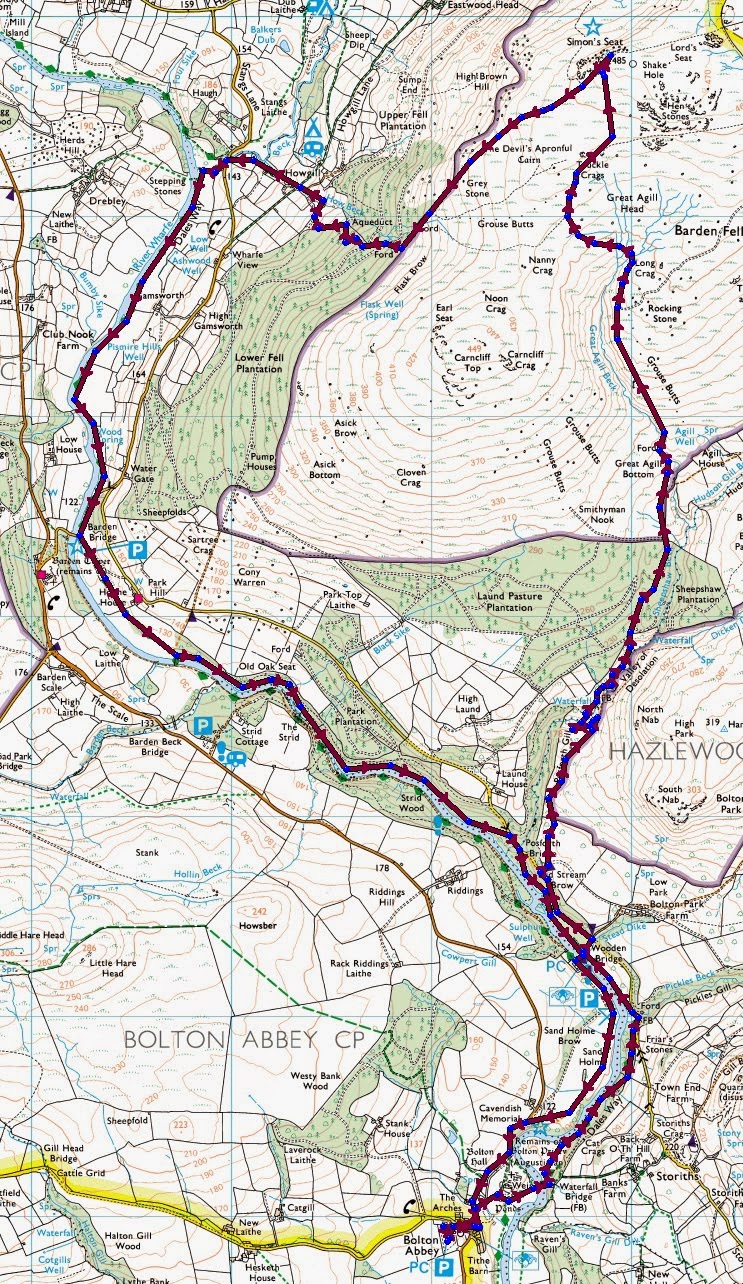 Oh, and by the way, I managed to find three grouse chicks in that picture.  If you found more, then you have better eyesight than me.