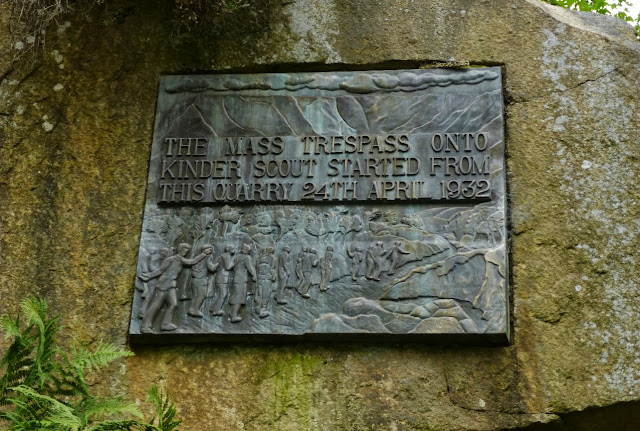 Today's walk was up to edge of the legendary Kinder Scout.  I've heard so much about Kinder Scout, Kinder Downfall and of course, The Kinder Trespass., it was time I saw it for myself, and Peter worked out a route of just over 7 miles taking us up onto the edge and along to Kinder Downfall.  Peaks and groughs could be saved for another day.

So we parked up below the memorial plaque in the first picture and set off.  The route wasn't too difficult, we made our way through a field of cows ( I always have to mention them, cos they make me nervous). Once again we made it to the other side of the field unharmed. We walked along the edge of the wood which backs onto Kinder Reservoir until we got to it's most easterly tip.

What I didn't know was that Peter had planned the route with the assumption that a path that ran out on the map wouldn't really run out or come to a dead end.  That would be silly, people don't just walk so far and then turn back.  He was confident it would continue on the ground.

We did sort of find a path, that sort of went in the right direction.  But it also sort of kept fading in and out.
In the end, we gave up trying to follow it and basically went for Peter's favourite way of getting to the top - straight up!

We ended up making our way through thick heather, rough ground and bog up the steep slopes of the bank. Hard work!   But finally we met up with the path coming from The Three Knolls.  I was so relieved.  Walking is much easier when you have a path, and your feet don't drop into unseen dips and holes.

Walking on, we clambered over the waterfall of Red Brook, (we could have followed the path that went round the top, but it was much more fun this way), and enjoyed the views of Kinder Reservoir and beyond. We reached Kinder Downfall where we planned to have a pie stop, but our plans were thwarted by three devious ladies who were after our pies.

They were already at Kinder Downfall when we got there, mingling with the walkers.  We hardly noticed them as we admired the views and then took loads of photo's.  But they'd been eyeing us up from the start. We settled down on a convenient rock with a good view, and rummaged a steak pie out of the rucksack. I'd just got it out of the wrapper when I realised that one of the three had sneaked up behind me and was just about to nab the pie from my hand.  I pulled it back quickly, shouting at her, but she hardly stepped back.  She just stared at the pie, waiting for me to give it to her. Peter had to stand up and chase her off, shouting and growling.  Who would believe it?  A sheep tried to steal my pie?

We sat down and tried again, but it was no good.  There were three ewes circling us, bouncing from one rock to another and getting closer all the time. Peter got up and chased them off again, but the biggest of them (I've named her Ma Baker), just wasn't afraid.  She hardly got out of Peter's way, and just kept eyeing up our food.......... Menacingly!

We quickly gave up trying to eat in peace and moved away from the waterfall. I've never come across such fearless sheep before. Other walkers must have happily given them sandwiches and titbits in the past. Us two greedy beggars who wouldn't share were obviously something very new to them.


We did enjoy a cup of tea in peace further along though.

We came down the bank via William Clough, (which at least had a path), until we reached Kinder Reservoir and then the road back to the car park. 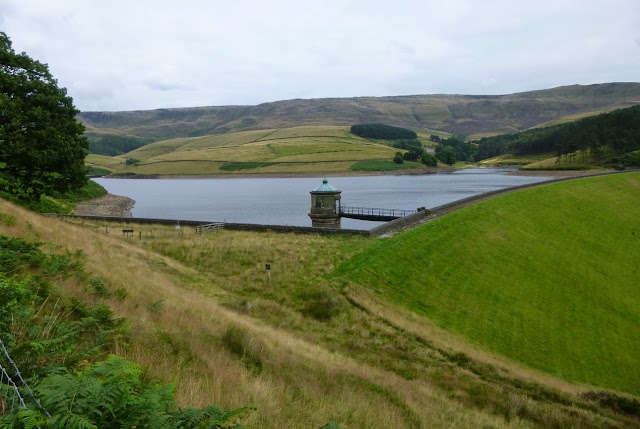 Just over 7 miles and 1900ft of up.  The up bit was challenging, (as per the map below),  the edge bit lovely, the rest bit wasn't very restful, and you had to keep an eye on where you put your feet on the down bit.  All in all a good day.   And what about Ma Baker?  I wonder if she and her cohorts are still up there chasing down buns and sandwiches? 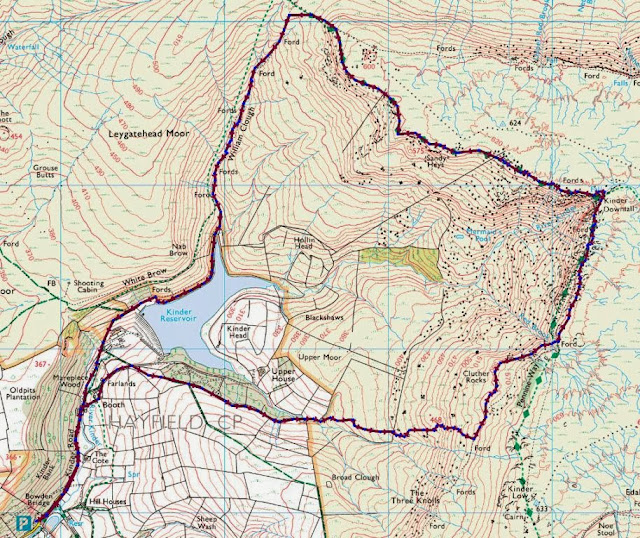 Sadly, although we planned to continue our mini tour of England and Wales by going on to Wales after this walk, we were thwarted again.  Disappointingly, our campervan broke down and we had to return home.  Wales will have to wait.