Visiting the ruins of the lead mine industry along Gunnerside Beck and Blakethwaite Gill has become a favourite walk of mine, and I wanted to show Peter how brilliant it is.  Both of us are well out of condition, so I planned today's walk to be as short as possible.  This meant a direct route alongside the streams from Gunnerside Village to Blakethwaite Dam and then just as directly back.  I've never walked all the way alongside the becks before, so I was looking forward to investigating new paths.

We parked next to the Village Hall In Gunnerside, and crossed over Gunnerside Beck to start our walk on it's east side, following the path northwards.
This tree was such a vibrant red, it stood out for miles.  Weirdly, it was the only tree in the area showing Autumn colours.
Walking further along, the slopes start to look more ravaged and scarred. Spoil heaps and Hushes break up the greens and browns of the bracken and heather.  You'd think it would be ugly, but it isn't. 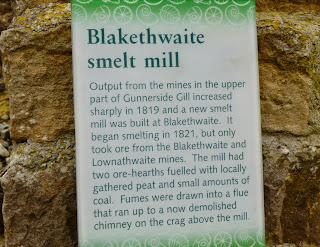 Upstream, at the point where Blind Gill and Blakethwaite Gill meet to become Gunnerside Beck, more smelt mills were built.  Every time I walk the paths up this way, I wonder about the people who used to work here and if they walked these paths every day to and from work.  I imagine the little dale would have looked so different.  I think the air would be full of the fumes and soot of the smelt mills, and the greens and browns of the plants would be gone, with only the dull grey of the rocks to look at.
Would they understand why we walk these miles to see what they left behind?  Maybe.  Maybe not. From here we go right to follow Blakethwaite Gill.
Further upstream the OS maps suggest a ford just south of Eweleap Scar.  We planned use it on our way back, but realised it's now very difficult to cross at that point.  Although the stream is low, the bank has slipped away on the west side, leaving a slippery muddy clamber up, (or down).
We kept following Blakethwaite Gill, on and on as it curved around Gunnerside Moor.   I was keen for Blakethwaite Dams to come into view, but they seemed to take forever.  Then at last we could see them.  They are just ruins now, but the waterfall from the top dam is still impressive.
We took a break on the top dam, enjoying the views and speculating over the effect the dams have had on the surroundings.

Rested and rejuvenated, it was time to find our way back.  We returned the way we had come, walking alongside Blakethwaite Gill until we reached the Blakethwaite smelt mills.  Here it is easy to safely cross the streams, and then follow the track along the west side of Gunnerside Beck.

The very last stretch of the walk breaks off the track and follows a ROW directly back to the village.  As always, paths on the map do not always match what you can see on the ground.  Or not see as the case may be.  We couldn't see a path. We headed in the general direction of the village anyway, and came out of the field at a gate marked as a ROW.  Exactly as we should have done.