At the beginning of August, we set out on a mini tour of some of our favourite places in the UK.  Unfortunately, we didn't get as far as we would have liked, but that's another story.  We started our road trip with a visit to the Peak District, and this little 6 mile walk.

Starting at the Dove Dale car park shortly after lunch, we followed the river Dove to Milldale, enjoying the river, the plants and our surroundings.
The steep sides of Dove Dale are pitted with caves and fabulous water and weather sculpted rock formations.  We had to climb a short, but very steep and slippery path to get a closer view of Reynards Cave.  It's not really a cave, more of a glorious arch. 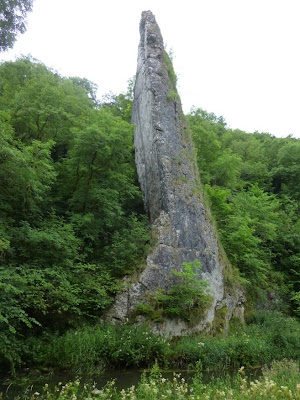 A bit further along the river Ilam Rock draws the eye.

At Milldale we took some time out for a cup of tea and a bit of flapjack, and to shelter from the rain, which had become almost torrential.  We met a couple who'd completed 20 miles so far and were just of to complete the final 6.  Hmmmmmm.  I don't think Peter and I are quite up to that level of fitness.

Rain stopped and tea all gone, we set of the the second half of our walk up the hill west of the river and turning to make our way back to the car park.  On the way we met loads of walkers coming the other way on a charity walk, and like them fought to open a gate that wouldn't open.
There was a stile alongside, and I think it had to be the most difficult stile I've ever come across.  You ended up straddled over the top of the wall trying to get your legs and feet over from one step to another.  Quite ridiculous really.  Another walker going the opposite way had obviously seen us clambering over without and grace or decorum and decided to go through the gate.  Guess what?  Just like us he spent a couple of minutes trying to get the gate open before making the undignified clamber over the stile.   I think the farmer must have been chuckling away for hours when he built/rebuilt that stile.

We carried on towards Bunster Hill, following a path that works around the hill about half way up the slope, which is pretty steep.  There was a hairy patch when we came across an area where the path the had landslipped down the slope, but views across Ilam and beyond. 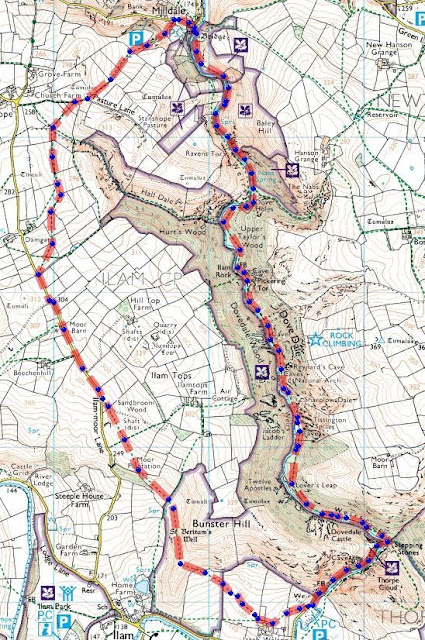 And from there we made our way through fields of cows, calfs and respective bulls on our way back to the car park.  As always, I felt nervous, but they all behaved with impeccable manners and completely ignored us.  Phew!

My only other comment regarding cows is "Cor Blimey!  Have you heard the racket calves make when they're suckling?  Noisy beggars!"
We were quite amazed by it.


A lovely little afternoons walk, and more days in the Peak District to come.  Wonderful.