After a good night's sleep in the van, we woke to the promise of a beautiful, sunny day. Actually, we knew it was gonna be a scorcher, but that didn't put us off. We knew it was going to be very hard work in the heat to reach summit of Great Gable, but we were gonna get there, no matter how much water we had to carry. So, after a leisurely breakfast, we drove towards the car park at Wasdale Head, passing alongside Wast Water en route. The water looked so good, we just had to stop and take pictures. 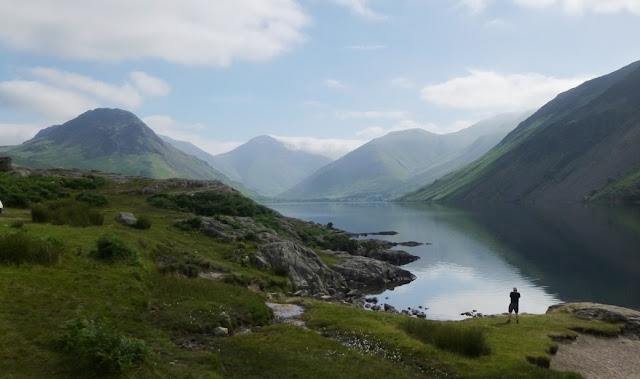 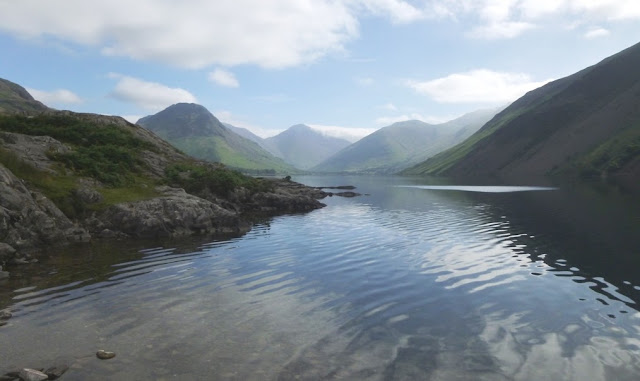 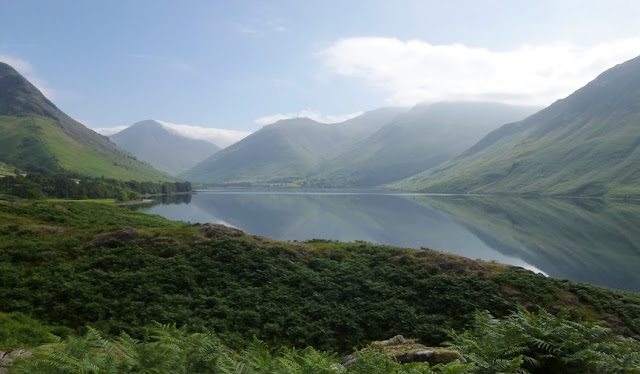 But we did eventually get to Wasdale Head. We booted up, filling our rucksacks with loads of water, a bit of food, the essentials such as a torch, plasters and a lightweight waterproof jacket. Why? Well just in case every weather forecaster in the UK and beyond has got it wrong and it rains....... As if! You could argue that I might need it if we ended up getting stuck on the hill into the night, and it rained then, or as an extra layer if it got cold. Hill walking folk are suppose to prepare for every eventuality and every just in case. This just means heavier rucksacks and I hate it. (But I still took the waterproof).

We locked up the van and set off on our way. Or at least we thought we'd locked up the van. What we'd actually done was left the side door wide open, with all our belongings and valuables exposed to anyone who fancied helping themselves. Obviously we didn't know about it (or what happened as a result), until we got back. Blissfully ignorant, we made our way along the path towards Great Gable. 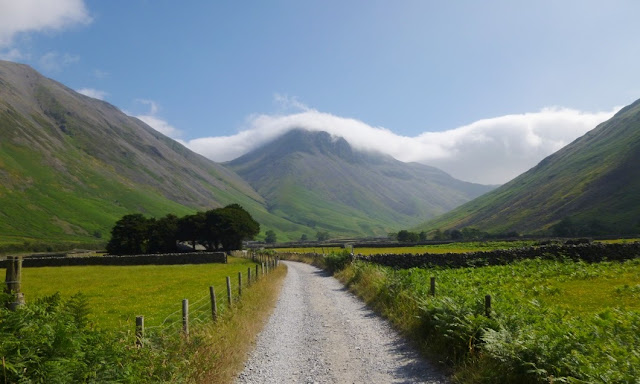 As we knew it would be, the heat was exhausting. But we are quite used to taking our time and stopping at every opportunity, and today was no different. In fact, Gizmo (the GPS) reckoned we spent more time stopped than we did walking (I blame it on the glorious views). The sun was high and the temperature rose. Our packs got lighter because we were drinking so much water, and we delighted in every little breath of wind, standing still, arms open trying to catch as much as possible of the slightest breeze. We'd already planned to enjoy the ascent and take all day about it because of the heat. So we did.

When we got to the summit the memorial plaque was missing (for refurb), which was a little disappointing. And it wasn't worth taking many photographs, as the haze obscured the views. But it was lovely up there and we sat for a while, enjoying the sun, the breeze, and the world around us.

And then it was time to go down. Peter's original route was to take the path heading South West and go straight down through the gap between White Napes and Great Napes. After a review (encouraged by yours truly), he decided that might be a bit steep, and chose the North West Path heading for Beck Head before turning South West further down. This seemed a much better route.

And I am sure it was, if we'd have gone that way. But we didn't, we ended up following a track which took us just North of White Napes, and then onto an extensive scree slope. And we weren't the only ones. Behind us came families and groups, all looking for the way down, and all facing this long, and very wide slide of loose stone.
The slope separated the fun loving and sure footed from the uncoordinated wusses. I of course was a wuss. I didn't like the slope. I didn't like the way my feet kept shooting from under me, landing me on my backside.  I didn't like that I couldn't get get back up again. Behind me, other walkers didn't bother trying, choosing to slide down on their bums. I finally managed to get up and stay upright as I went downhill, but I didn't like the way the stones kept moving under my boots. It was like being on a wet slippery floor and my shoulders ached with the effort of using my sticks to keep balance.

Another walker passed by, sliding and skidding like it was the most normal thing in the world, using the scree to move faster downhill. I tried to copy his movement, but I was rubbish at it, and all I got for my efforts were stones in my boots! What made this all the worse was Peter. He'd learnt how to scree ski and had thoroughly enjoyed himself all the way down. And there he was, down at the bottom, sat waiting for me with a big grin on his face because he'd had such a brilliant time. I looked daggers at him as I slipped and skidded, slowly and unsurely to reach him. When I finally got there, his first words were, "That was fun, can we do it again...............?"

Once we'd got past the scree, we followed a steep grassy path down to the base of the mountain. My toes were hurting, and in the end I took my boots off. The grass felt lovely and cool beneath my feet.  Sadly I had to put the boots back on when the path levelled out and became gravelled and rocky. We got to the car park where we could see all the people who'd chosen the scree route. We were all covered top to toe in scree dust and looked as mucky as miners.
We got to the van and then discovered to our horror that the door had been open all the time we'd been away. Hurriedly we checked the contents, and then realised t that absolutely nothing had been touched. Maybe folks thought we were close by, or maybe (as I prefer to think) it's simply that most are honest. Whatever the reason, we were very relieved that nothing had been stolen. But we will be double checking those doors every time we leave it in future.

Another brilliant day despite the scree. I have decided that I must learn how to scree ski, and then maybe I won't feel such a wuss or look like I've been chewing a wasp the next time I come down one of those slopes.

Here's a map showing our track.  You can see we abandoned the formal paths just so we could play on the slide.