As I mentioned in the last post, I've been hanging around Grasmere with not a lot to do, cos himself has been busy teaching.

OK, so I lied.  How can you be in the middle of the Lake District and not have anything to do!  It was quite the opposite.... I couldn't work out where I wanted to go.   Looking at the surrounding hills on my map, I chose to head up to Stone Arthur, cos I liked the name, and then just beyond it was Great Rigg, and then Fairfield.  When you say it like that, it's not far at all.   I could come down using a route I knew Peter had chosen for a video.  It's called "In High Places", you might see it on Sky if you watch the painting and drawing channel.  Basically the route comes past Grisedale Tarn and follows Ton Tongue Gill back to the main road into Grasmere.

The very direct route from Grasmere up to Stone Arthur is very steep. In fact, the path on the map doesn't match the one on the ground at all.  This would be because you'd need climbing gear to follow the very direct  ROW on the OS map.  The very sensible walking fraternity before me have decided they didn't want to climb, and instead, used their boots to carve out a zig zag path up.  Still steep, but now walkable, and much more sensible.  I needed loads of rest stops though.  Hey Presto, loads of pictures.
I like Stone Arthur.

So from there it was up to Great Rigg, which I must have found fairly uneventful, as I didn't take many pictures, although I did enjoy a rest stop at the top.  This is when I realised that I was now on the Fairfield Horseshoe route.  I've seen it mentioned and discussed in forums, but hadn't really thought about it.  However, now I was up here, I could see the long, grassy path leading up to Great Rigg, and then on towards Fairfield.  I joined the masses on the long walk up.  Actually, I didn't so much join them as watched them all overtake me.  (I'm slow remember).

It does seem like a long haul, but when you are there, the views all around, it's worth it. Time for the camera again......

I have to admit I took a little while finding the path down, but only because the summit is a big area, covered in rocks and boulders.   But as soon as I'd got the Tarn on my right, I knew I was heading in the right direction.

The first part of the walk down from Fairfield to Hause Gap is reasonable.  But the path turns to scree, and the slope becomes steep.  I was glad I had the sticks as I made my way down cautiously.

The path down from here is boulder littered, making the walking interesting and fun.

It was here I was joined by an energetic and chatty woman who didn't overtake me, but kept me company as we walked down the valley to road, and then back to Grasmere.  We parted company at the village hall at about 5 o'clock.  Peter's class was just packing up for the day.  They all looked at me in surprise.  Apparently the text I'd sent Peter at 2 o'clock telling him I was on Fairfield hadn't reached him till about 20 past 4.  He was thinking I'd be a long time yet.  Now I know I'm slow............. 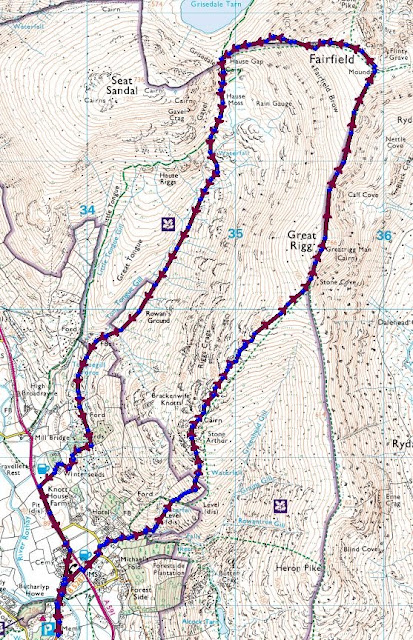 Here's the map.  2800ft of up and about 6 1/2 miles it sez.  My GPS tracked an extra mile, but I think that was cos of the zig zagging at the start, and a bit of an extra curve on the end.  Doesn't matter, it was all lovely.