Today was another recce walk for the Walkers Forum meet that I have planned in April.  Mike at Walking Books had very kindly shown me a route to get to the Height of Hazely from West Burton and we were going to try it out.  I should point out that at this point, when Peter started the car up, there was no snow in the area at all.  Nothing.  Nada.  Not a sausage.  Not a white patch nor a slippery bit.

But as we drove out, and took the tank road towards Leyburn, we saw Penhill in the distance, looking really rather beautiful in it's white coat.  My statement of "That looks ominous!", fell on deaf ears.  Peter's attitude is always, "How hard can it be?", and the car sped on. 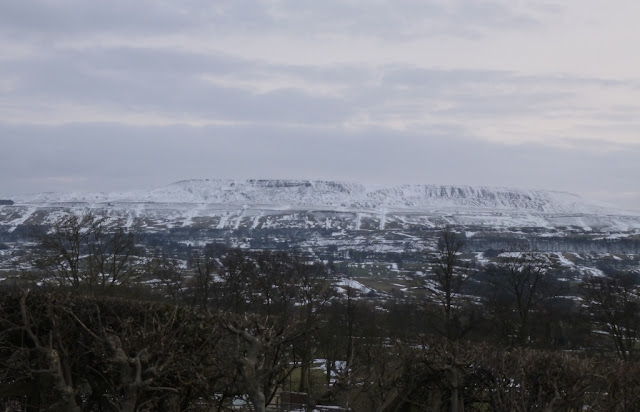 We parked at Aysgarth falls and paid the £4 all day parking charge.  A quick photo of the Upper Falls: 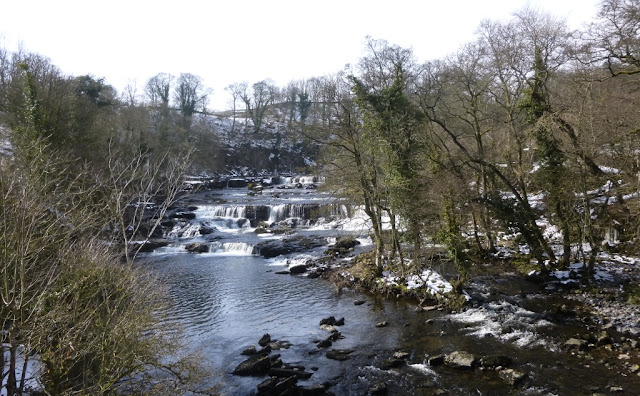 From there we headed straight out to West Burton. It was a beautiful day, and the snow was only patchy. 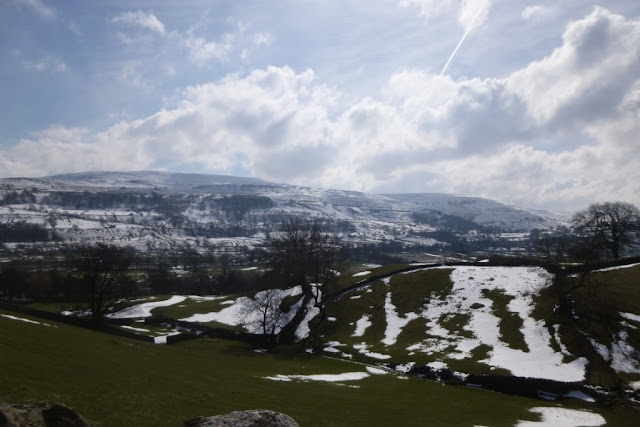 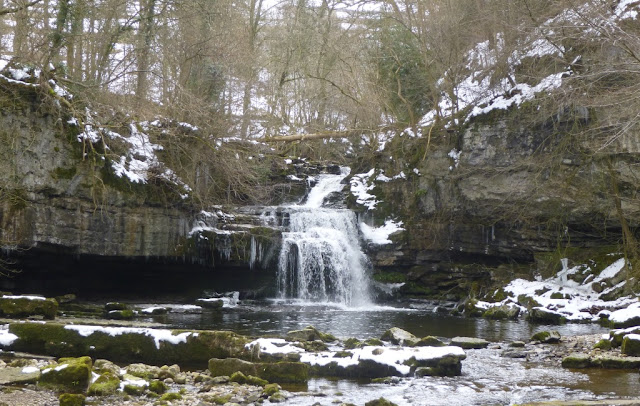 and from there we followed the route shown by Mike.  It was easy with just a few checks of both GPS and maps.  I'm now dead chuffed we decided to test it out.  The views across Wensleydale opened out as we climbed.  Quite stunning. 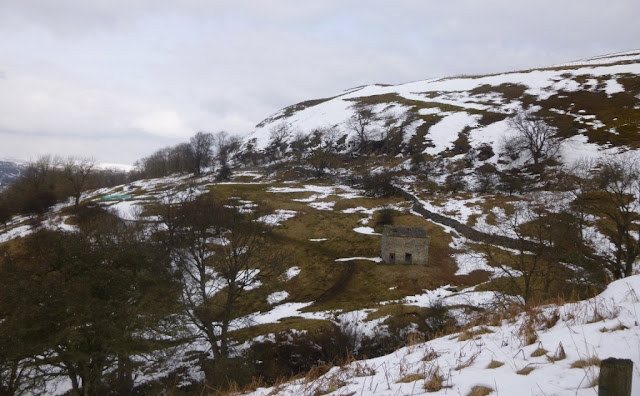 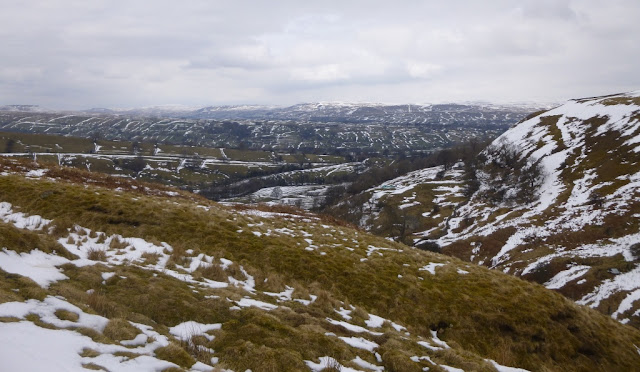 And then we hit the snow! Obviously we'd seen it coming.  You could hardly miss the white blanket covering the hills above us.  We just weren't sure what it was going to be like.  Deep?  Icy?  Too slippy to move across?  We don't have any special sort of ice grips like microspikes.  Would we manage? 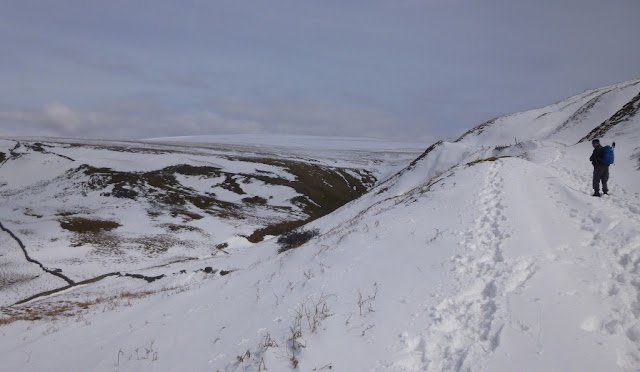 As it happens, we didn't need any sort of special grips. Mostly cos the snow was nice and soft and just right to sink up to your nether regions in.  We were not wearing waterproof trousers or gaiters either (cos we don't own gaiters).  I should explain that not wearing gaiters means that when leg goes in snow thigh deep, snow goes up trouser leg.......  Cold! 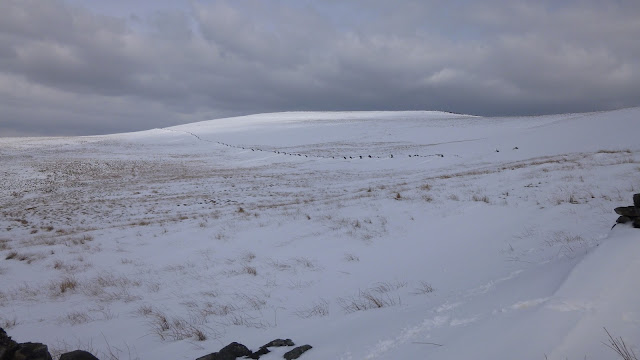 Actually it was really quite fun.  Luckily for us, a fair number of people who knew the way had walked before us, marking out the path quite clearly with their footsteps.  The snow was soft, not icy, so we weren't slipping and sliding everywhere and we reached the point where we were to turn off the bridleway and follow a wall  up to the summit of Hazely quite easily.

We'd been studying the snow drifts as we walked, some of them amazingly deep, and most of them up against the stone walls.  In fact, we cut our seats out of the one we chose to shelter in whilst we had a pit stop.  The next stage of the walk looked daunting. We had to follow the wall, which was nearly buried under snow, up the hill.  Nobody else had walked that way.  Our footsteps would be the first.  So after a steak pie and hot tea, we prepared ourselves for the challenge.

We'd worked out that it would be better to follow the wall, but keep away from it as it were, because that's where the snow was deepest.  But this would mean that we would be walking across the heathery, boggy snow covered hill, not quite sure what would be underfoot.  I let Peter go first. 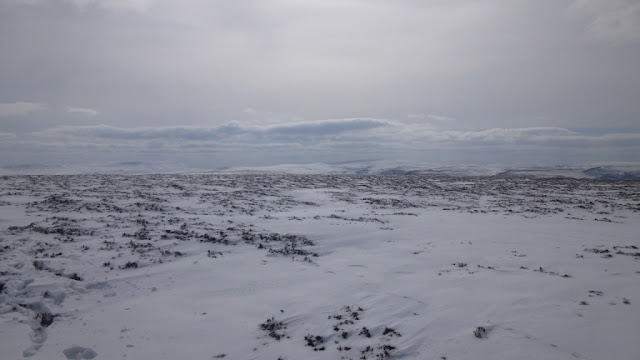 After 10 minutes I was beginning to think this was a seriously bad idea.  The going was really tough and looked to be that way for the rest of the climb that we could see.  We couldn't see the summit, or judge what the conditions were going to be like.   Peter on the other hand was his ever optimistic self, and not ready to give up.  He spotted a track (that we should have followed earlier to be honest,), and convinced me we should take it.   When we got to it, walking was much easier, someone had been before us, and once again we could see how deep the snow was.

We shall be forever grateful to that intrepid pair that went aheadt of us.  As we followed their tracks, the path went over a massive snow drift.  The footsteps in front of us didn't sink into it tho'?  And neither did we.  Amazingly, the snowdrifts were very solid, and very easy to walk on.  The footsteps had worked this out too, and moved to the wall, walking on the snowdrifts alongside it.  We followed, delighting in how easy it was to walk on solid drifts rather than the soft snow.

In relatively no time at all, we reached the summit of the Height of Hazely, where we turned left, (west), to follow a fence down to the edge of the hill.  We were quite safe as walked along the edge of the hill, cos there was a wall guarding us from the slopes, well it would have been, if wasn't for the fact that most of the time we could step over it, the drifts were so high.  We were still walking on them, loving the shapes and patterns the wind had carved into our surroundings. 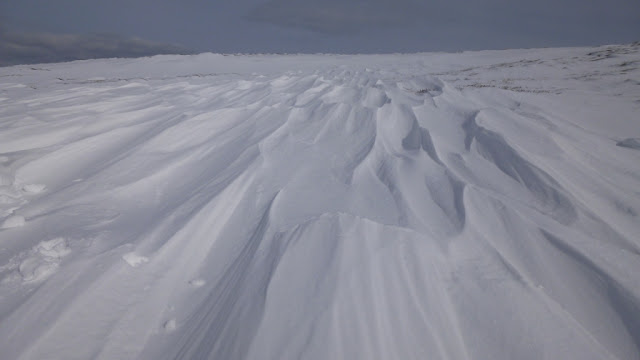 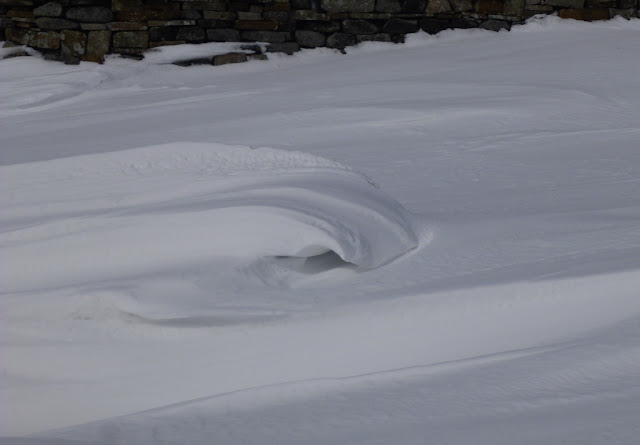 There was still the occasional moment foot went down and snow climbed up the trouser leg, and, in the words of the Pieman, the wind was very definitely "nithering", but the sun and the scenery more than made up for it.  I don't know how many times I'd wished we had a sledge with us.

And then it was time tyo make our way down.  The path I'd chosen is basically a gulley of zigzags down the side of the hill.  Bits of it are quite steep.  We just thought...... "BOBSLEIGH RUN!" 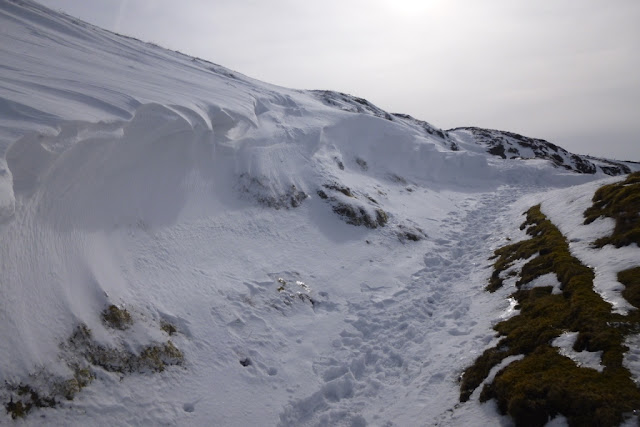 Boy that would have been so much fun.  All we needed was that sledge.

We got a little confuddled at the bottom, but I remembered this part of the route always did that, because what is on the ground does not match the maps.  Not a problem, we soon found our way to the next snowdrift over the wall,  (there was a little stile/gate underneath there somewhere), on to the final stretch of our walk and our last impressionable encounter with the drifting snow.
We were supposed to walk down a farm lane, only we couldn't, cos it was full of snow.  Not much of the white stuff on the outside of the lane walls, but inside it was easily four of five foot deep and filled the lane almost completely.  The only way to go was to walk on top.  It felt a bit like we were walking on air, above the walls and fields on either side. Surreal!.  This next picture was supposed to show what it was like, how deep it was and the footsteps on top.  It looks a bit arty tho'.  That's Penhill behind. 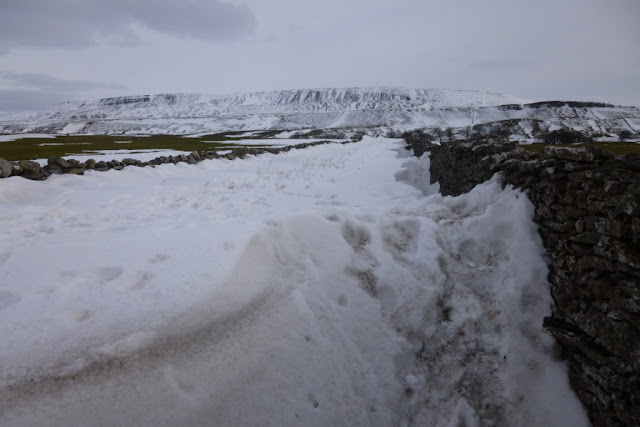 And shortly after, we were back at the car park.   We hadn't needed any special sort of winter boot grips in the snow, luckily, but I should point out that the wet muddy grassy paths elsewhere more than made up for that, I slipped all over the place. 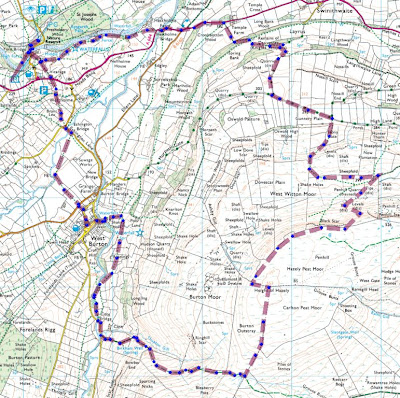 A good walk just over 10 miles and 2000ft of ascent. We're supposed to going to the Lake District tomorrow, I hope we've got enough energy.


To see another on a different route not including the Height of Hazely, click here:- Aysgarth to Penhill

To read about the same walk, but this time in the sun a couple of weeks later, click here:- Aysgarth to Penhill with the Walkers Forum