A walk in the white stuff

It's been a weekend of snow.  More for some than others.  People in the west have seen 20ft snowdrifts. People in the east noticed a few snowflakes driving home.   Richmond is in the middle, it snowed, but the roads were clear, and it melted from the houses and rooftops quite quickly.

I knew we had to get out this weekend, and since the roads were blocked  or dangerous in most directions, we decided on a local walk.  We could easily turn back if the conditions were too difficult.  Peter had his birthday gear to try out, (new rucksack and windproof fleece), and I've never tried to do a hill walk in the snow before, so I had a new type of walk to experience.

So off we went up the familiar route to Williance's Leap.  Unlike the town, there was plenty of snow out on the hills and fields.  I think we spent most of the walk ploughing through about six inches of it.  The landscape is so different covered in snow, and we paused to take photographs. 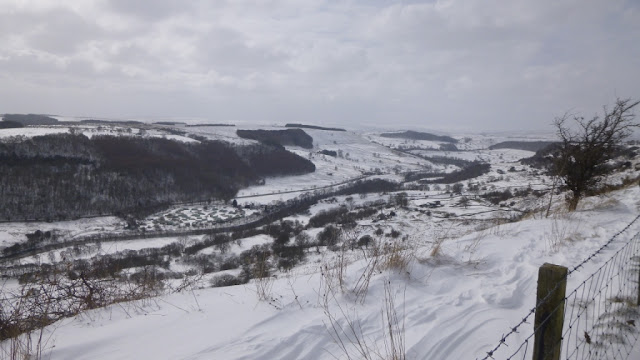 Up on top of Whitcliffe Scar I was amazed and delighted at the patterns the wind carved into the snow on the ground.  Much of the open grassland was nearly clearof the white stuff, as it had been blown into deep drifts.  We discovered a couple by sinking into them! 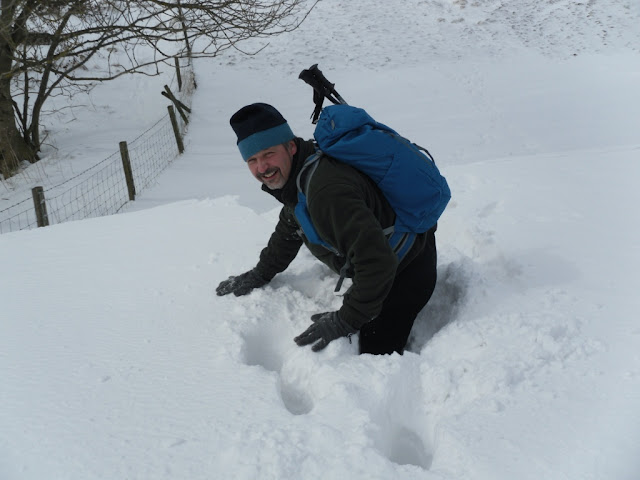 I have to admit taking loads of photographs as Peter battled to get out of the snow.  He did get his own back tho', see the video at the end.

It was all brilliant fun. I started to wish we'd bought a sledge with us. We walked on, admiring the way the wind carved the snow into fantastical shapes 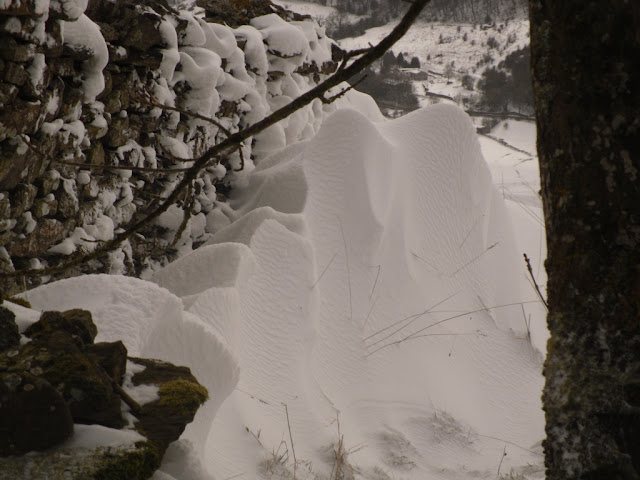 From Williance's Leap we turned north and headed for pine tree plantation. 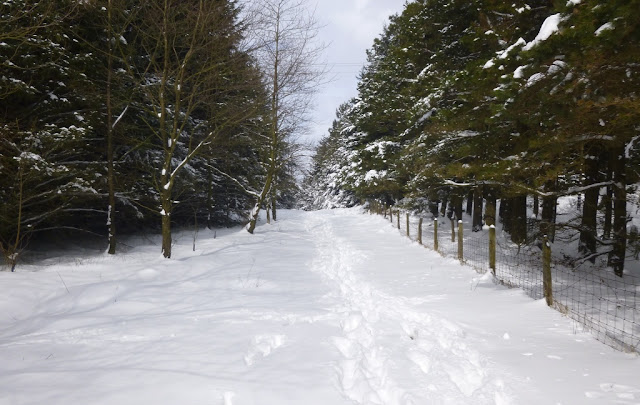 The path looks like something from a Christmas scene. It's deceiving.  Underneath all that pretty white stuff was a very sloppy, muddy, boggy path.  We took to following deer tracks figuring the deer knew where was dry. They did!

We took a few minutes at the edge of the wood to enjoy hot coffee and chocolate and noticing how wierd it is that the snow doesn't blow up against the walls. 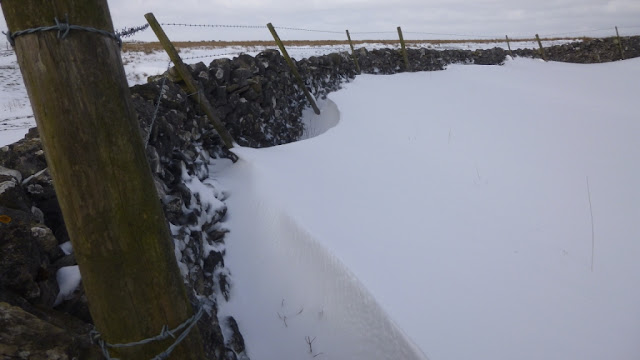 We went on, past High Coatsgarth to Low Moor, 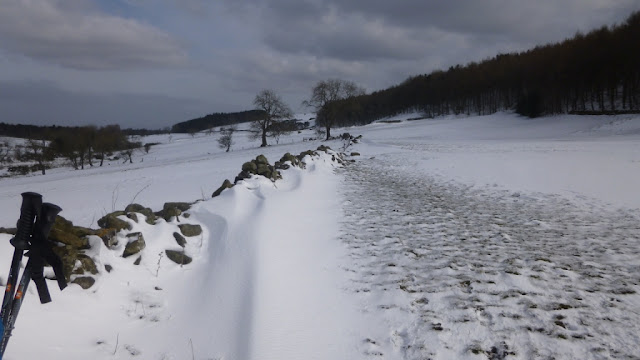 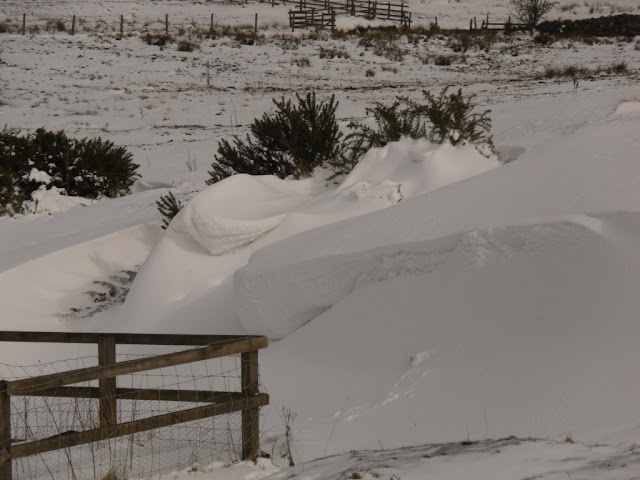 And up the hill towards Richmond Gallops.  (One of my favourite pictures). 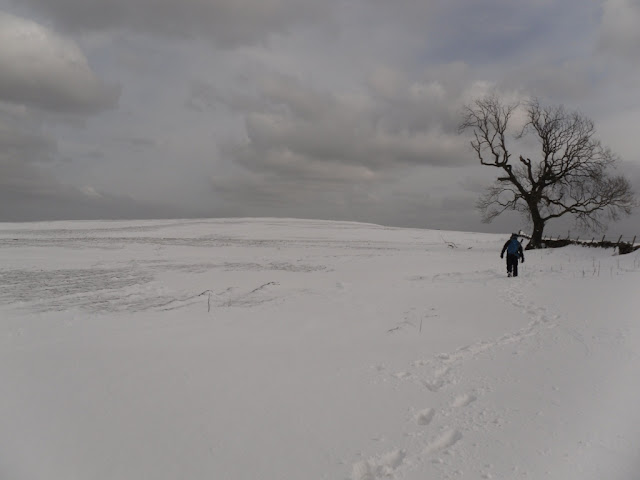 before we we finally hit the road road and headed home.
It was a brilliant few hours.  Only 6 miles and 750ft of climbing, but some of it was hard work, as you will be able to see from Peter's video.

(And  If you're wondering at the "Ow!" noises, it's cos a pulled muscle in me back keeps making me wince. It's getting better tho').  Here's the map. 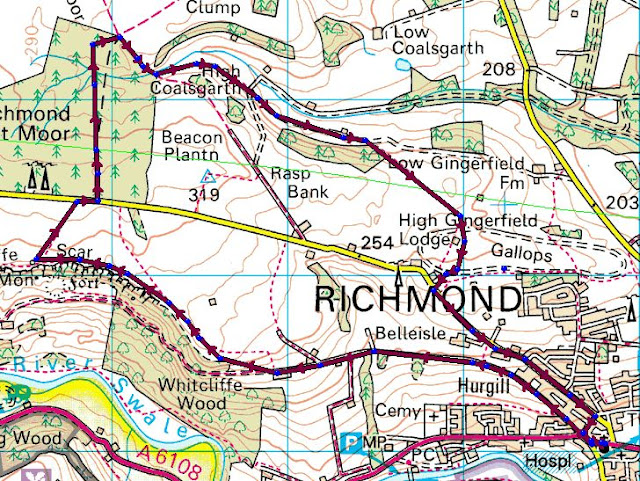