So we are here in Snowdonia, and like everyone else, our target is the top of Mount Snowdon.
We had it all planned.  Thanks to people on the Walking Forum (and Botty for warning us about the hazards of Welsh traffic), we were armed with our £10 parking fee and set out early (before 9 am is crack of dawn for us) to get to the Pen-y-Pass car park.  We got there about 8.50am.  And it was full?  Lots of people in front of us drove in to find out that it was full.  Lots of people behind us drove in to find out it was full.  And the "parking attendants", or whatever they were, told all of us to turn round, drive back 2 1/2 miles and park in the village of Nant Peris. We could then get a bus back up to the start of our walk.  Tip for anyone else planning the same trip, we should have taken notice of the sign we saw in Nant Peris which told us the Pen-y-Pass car park was full.  (We didn't.  We thought they were telling us fibs.)
As it happens.  We were very lucky.  We managed to find the last space in one of the laybys.  The parking was free.  Yippee.  And not only that, it had a bus stop.  And not only that, the bus turned up just as we finished putting our boots on. A big red double decker.  Cool eh!
Right, so after using the facilities, we set off from Pen-y-Pass car park at about 9.45. Another tip for fellow walkers, if you don't like company, don't do this walk on a sunny Saturday morning in May.  There were people everywhere, all ages, all sizes and all states of fitness.  There were charity walkers wearing pink pants superman style or good cause logo's across their chests. There were big groups, little groups and chatty, noisy groups.  There where couples posing and photographing each other at every scene and lean mean walking machines striding up like the hill was flat!   London Waterloo is busier, but not much and at least there, everyone keeps moving.
So in amongst the hustle and bustle we went up the first part of the walk heading for the Pyg track until we got to Bwich y Moch (do not ask me to pronounce that).  Here the path splits.  Peter went right, taking the high road, across Crib Goch, (not my thing!).  I took the low road, along the much safer Pyg track. Whoever got to the other end first had to get the teas in.
The Pyg track is not the easiest of routes and quite steep in places but the weather was really good and the scenery was stunning.  I strolled along at my own pace (and I am slow) and just thoroughly enjoyed it.   I often looked up at Crib Goch wondering how Peter was getting on.  There were loads of people up there taking advantage of the good weather.
Eventually I reached the last steep incline of the Pyg Track and climbed up to the point where many of the paths meet up for the last 15 minutes of walking to reach the summit.  Climbing over those last few steps onto that ridge you step into a different weather zone.  We were sheltered down on the Pyg Track, but here on the ridge, the wind was freezing cold and very strong.  It had just gone1 pm.
And this is where I waited for Peter.  But the gloves, hat and coat didn't keep the cold out, and after half an hour I had to text him to say I was heading for the cafe.  I needed a hot drink.  The cafe itself was absolutely heaving, as was the area outside and the summit close by.  It  really was as bad as Waterloo or a tube station platform at rush hour.  It was absolutely packed.
Peter did eventually get there.  Apparently the number of  people on the ridge had resulted in queues to go across various stretches.  For this reason he was well over an hour behind me.  But by now, things were quietening down.  He had his tea, and a warm pasty, we visited the summit and took photo's, and started on the route down at around 3:30 pm.

But Oh!  What a wonderful walk down.  We went back along the Miners Track.  A very steep descent to start off, but then it flattens out and becomes a stroll.  The crowds had dissipated, the clouds had thinned to nothing, and the llyns reflected the blue of the sky.  It was absolutely fantastic. Peter filmed everything, I photographed everything.  A very relaxed and leisurely walk back to the car park. 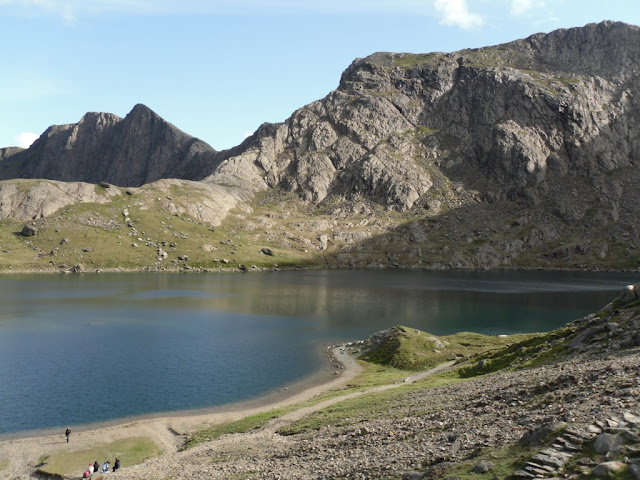 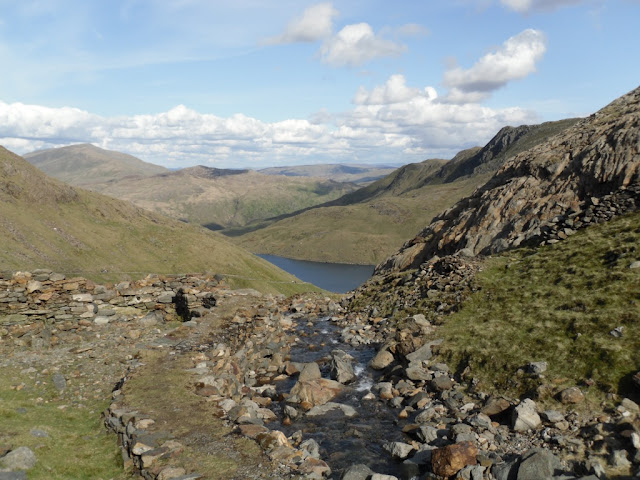 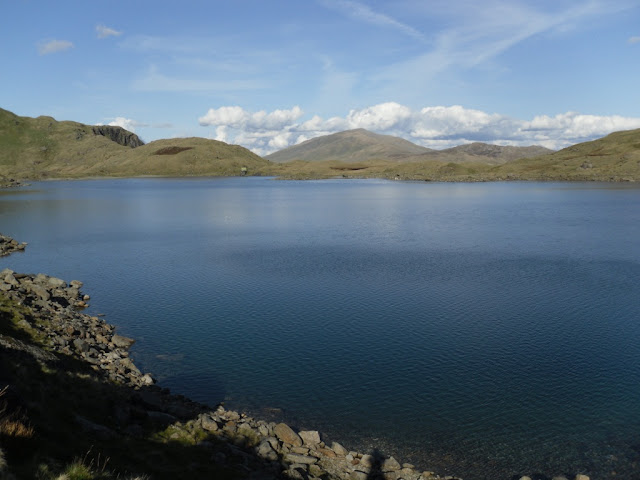 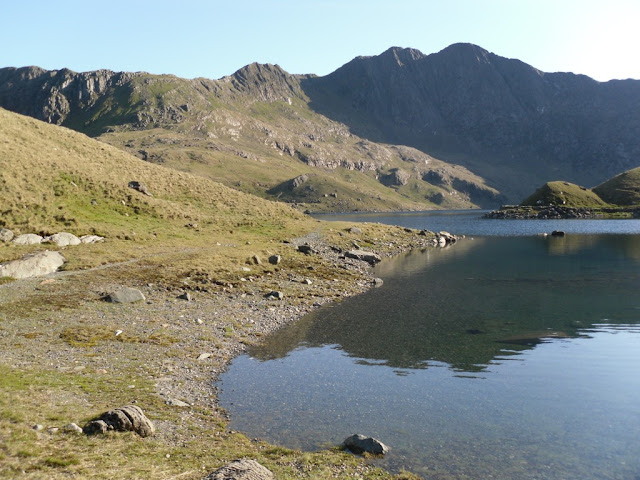 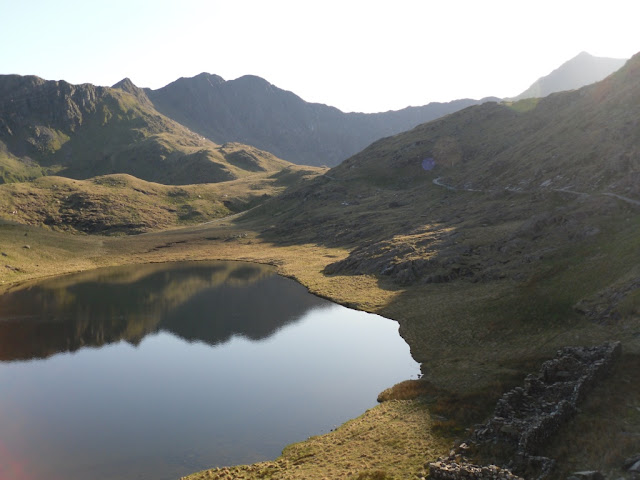 Unfortunately a bit too leisurely.  We just missed the last bus back.  Good job it was downhill to the car then!
On the way back to Caernarfon, we stopped at the Vaynol Arms for a bit of supper.  I can't recommend the chips, but Peter can recommend a pint of  "Golden Dragon" beer.
We'd walked nearly 9 miles, reached a height of around 3600 feet, and Peter had taken on the daunting Crib Goch.  We both slept very well that night.