Across the Irish Sea

We visited some friends in Northern Island last weekend.  It was fantastic!  Double click on any one of the photographs to get them full screen.  (Much better). 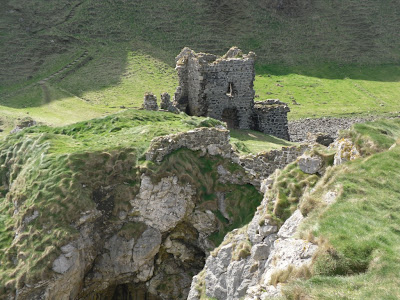 Kinblane Castle
On Saturday, after a leisurely breakfast, we took a drive up the coast road from Belfast. 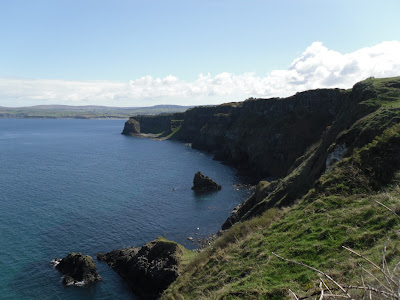 Our first stop was Kinblane Castle, a lesser known tourist attraction just a little way up the coast road from Ballycastle. 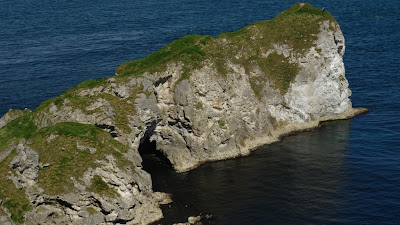 Considering the beauty of the place, it should have been overrun with visitors, but thankfully it wasn’t. 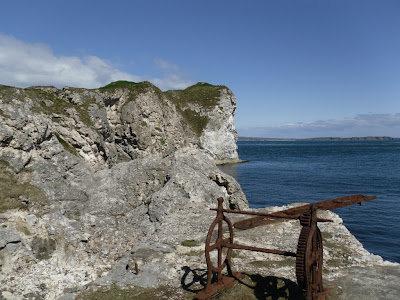 Apparently, the castle only stood for about 8 years, and there is not much but ruins now, however, the scenery is stunning. 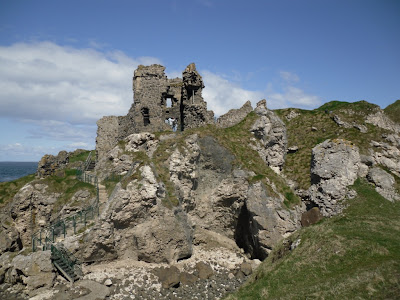 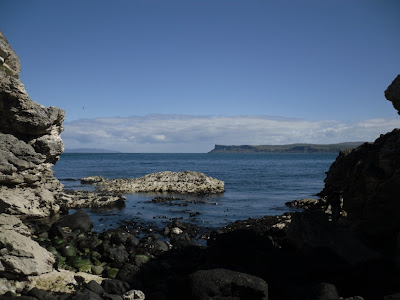 The sea was a gorgeous colour, it was a beautiful day,  we were surrounded by magnificent views and the company was excellent. 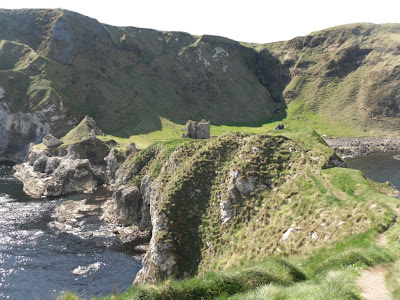 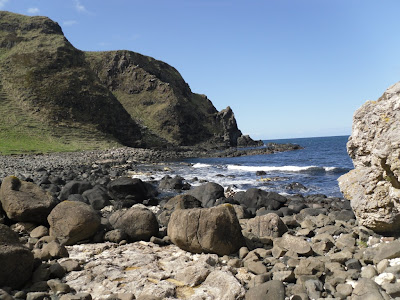 There’s a car park at the top, with quite a few steps (133 my friend counted) down, and then you get to wander around the small headland that projects out to sea.  With the weather as good as it was, and scenery like that, we couldn’t go wrong with the photographs.  Just brilliant. 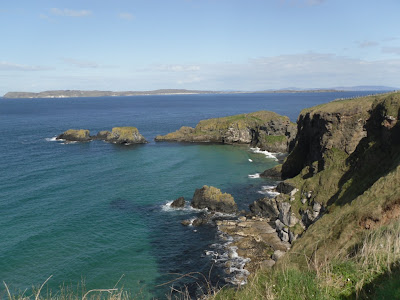 Carrick-a-Rede
Carrick-a-rede means “rock in the road”.  In this case the “road” is the route the salmon take through the North Sea, between Rathlin Island and Northern Ireland. 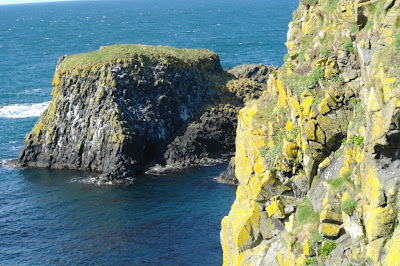 The “rock” is a tiny little island jutting out into that road.   Every year, between June and September, local fishermen would get across to the island to fish for the salmon.  This meant that they needed a bridge. 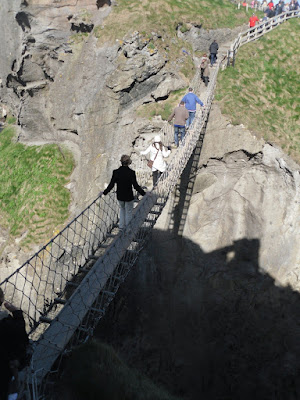 The island was used for around 350 yrs, and for all that time the fishermen were building rope bridges, across the 60 ft gap.  The last one known to be in use was 89ft above the water, had a single hand rail and wooden slats that were quite a way apart.  Scary!
The one that is there now was built in 2004.  It’s still a rope bridge, bouncy and wobbly like all rope bridges, but it’s been well built and tested and is nice and safe for us touristy folk. 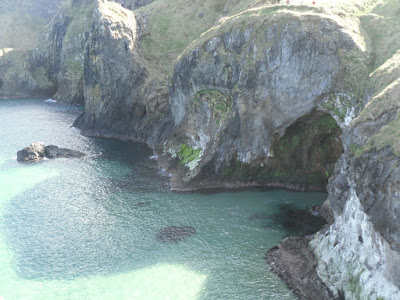 You have to pay to walk across the bridge and there was a little bit of a walk down to it, and then obviously back up.  We really enjoyed that. 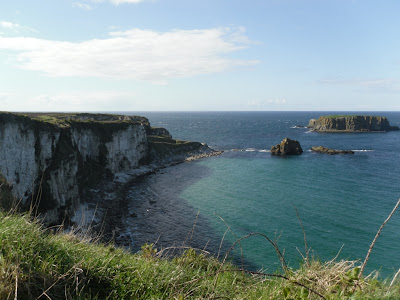 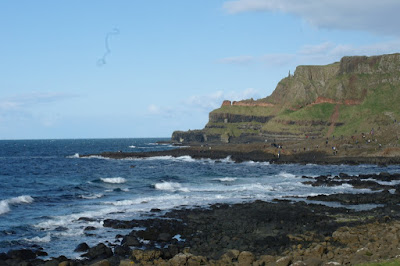 Giant’s Causeway
We didn’t get here till about 4:30-5pm.   Apparently, if we’d arrived later, we’d have got our parking free, however, everywhere would be closed.  (Not the causeway, obviously.) 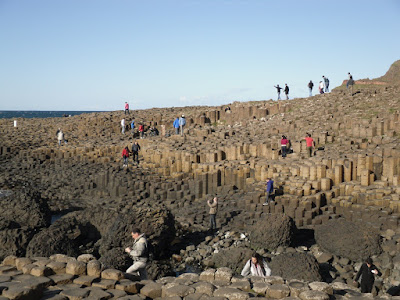 Wiki – “Some 50/60 million years ago, during the Paleogene period, Antrim was subject to intense volcanic activity, when highly fluid molten basalt intruded through chalk beds to form an extensive lava plateau. As the lava cooled rapidly, contraction occurred. Horizontal contraction fractured in a similar way to drying mud, with the cracks propagating down as the mass cooled, leaving pillarlike structures, which are also fractured horizontally into "biscuits"” 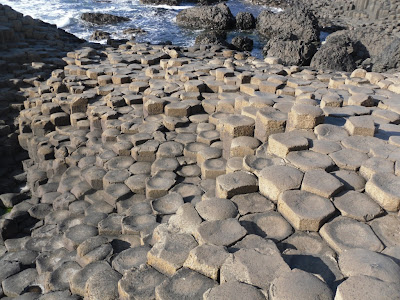 Legend has it that it was built during a feud between the Irish giant Finn Mac Cool and Scottish giant Benandonner.  There are different versions of how it was built, but it ends with the Benandonner, the largest of the two crossing the causeway with the intent of fisticuffs with Finn Mac Cool.  Finn, realising that he was not big enough to win a fight against the Scottish giant, disguised himself as a baby.
When Benandonner came knocking, Finns wife told the Scotsman that Finn was out at the moment, “but here, look what a beautiful baby we have.” Benandonner thought “Cor blimey!” (in Scottish obviously) “If that’s the child, how big is the daddy?” and made a run for it, tearing up the causeway and throwing the rocks into the sea so that Finn couldn’t follow him..... 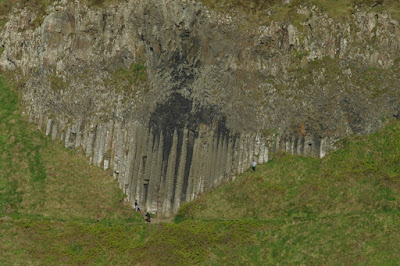 I like that story.
I suppose I didn’t really know what to expect, since I hadn’t looked it up before we went, and everything I knew was old and forgotten, so when I got there it was all sort of a complete surprise.  Peter took these very excellent pictures by the way. 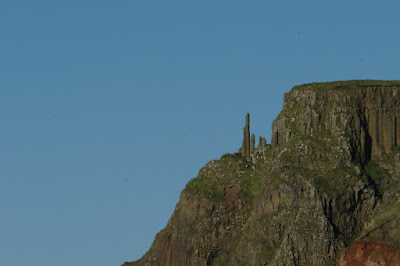 First, I was surprised by how small the individual pillars were, somehow I was expecting giant stepping stones.  Secondly I was amazed at how many of them there where, and then finally, sitting up on one of the highest rocks, how small the whole area was.
A very interesting visit.  There are several structures that resemble things, such as the organ, the chimney stacks and the giant’s boot.  We didn’t get to see or photo all of them, but I enjoyed sitting on the top of the causeway,  taking it all in.    Awesome. 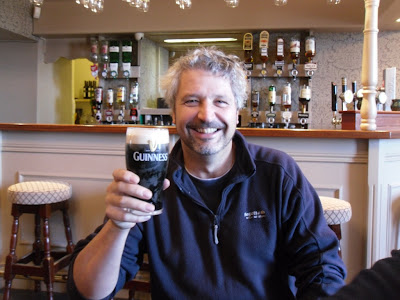 Guiness in an Irish pub. Our final stop of the day before driving home.  It was an excellent, excellent day and we have to give a massive thank you to our friends Jenny and Bob for making it so.  Brilliant!