A little wander in Wensleydale - Ayesgarth, West Burton and the River Ure


I discovered the Walking Forum  a little while ago, and through it, ended up making arrangements with Cheviot Stroller, AKA Rambling Nana (see blog links), to meet up for a walk.  We decided on Ayesgarth, and I worked out a route of about 8½ miles.


We both arrived in the NT carpark, smiled hello at each other, and set out to view the delights of Ayesgarth and beyond.  The route can be seen on the map at the end.

After a quick look at the Upper Falls, the first half of the walk took us through the fields to West Burton, where we saw the village waterfall, also known as the Cauldron Falls.

Then we climbed gently along grassy tracks to a point where we were overlooking the dale.  Not very high, but high enough to get some delightful t views.  Along the route we spotted a squirrel dash away from us along the wall.  The fact that it chose not to run up a tree made us look again, and we quickly realised that it was a stoat. Cool!

Eventually, we turned left to make the gentle descent towards Swinithwaite.  Enjoying the views, we were also amused by the antics of several rams in the field next to us.  I swear it looked like only one of them was brave enough to investigate whatever it was in the hedge that caught his eye.  His five or so “mates” were all bunched up about 10ft behind him.  We could almost hear them egging him on as the whole group crept towards the hedge.   Curiosity could have killed the ram?


Through Swinithwaite, across a few more fields and then we spent the second half of the walk alongside the River Ure heading back to our starting point.  The river itself is fascinating, with the loads of waterfalls, and rocky stretches.  With the variety of birds and flowers around, there is always something that catches your eye.


I personally prefer being on the south side of the Ure as you approach Ayesgarth.  I think you get to see so much more of the river and all its nuances.


But we did cross over and take a look at lower and middle falls using the NT walk on the north side.  These touristy viewing points allow you good views of the falls, especially if you go to the very end and climb down to get an excellent view of the lower falls.

A bonus for me was that I got to see the grey heron that spends a lot of time at middle falls.  I even took a blurry picture.
Another lovely day in very pleasant and quietly tuneful company.  Now……….. Where next? 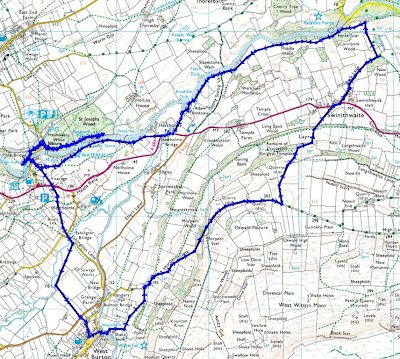