I'd agreed to meet Ed from the walking forum at Aysgarth Falls at 10 am for a walk that I'd planned.  At 9.25 I opened my eyes to look at the clock and then I became the fastest moving zombie ever.  I'd not woken up, but I knew I had to get out, and I couldn't remember any of things that you are supposed to do in the morning.

My little car flew over the hills, and it wasn't long before I ended up tailing a blue Ford into Carperby.  Fortunately it wasn't going that slow.  That would be because it was Ed, also late and now just in front of me.  Phew! We both pulled into the National Park car park at 10.15.  (He had a good excuse though, like driving for an hour and three quarters)

"Well!  That was a good start to the day", thought I, "let's hope it doesn't continue like that." and pulled my rucksack out of the car.  It was upside down, and the top was wide open!

So I picked everything up and after rummaging around under the car for the water bottles, got me boots on, locked the car and set off with Ed over the bridge towards Aysgarth Church.   It turned out to be a really good walk.  Not too strenuous and only a couple more hiccups, one of which was I'd forgotten my camera.  I used my mobile phone instead (which eventually run out of battery), and sadly many of the pictures aren't that clear, but I've added the best of them to the little story of our walk.

Excited at seeing so many different domestic animals, I didn't take notice of where we were going.  So we went the wrong way, but the bonus was that there were alpaca's in the field ahead of us.  In my hurry to go see, I didn't look.  And ended up in a pile on the road.  So, another thing we got to see today was my blood.  Not a lot fortunately, enough for me to have to get the plasters out though.  (I'm making it sound worse than it really was. It was only a few grazes.)

Anyway,  we got to see Alpaca's 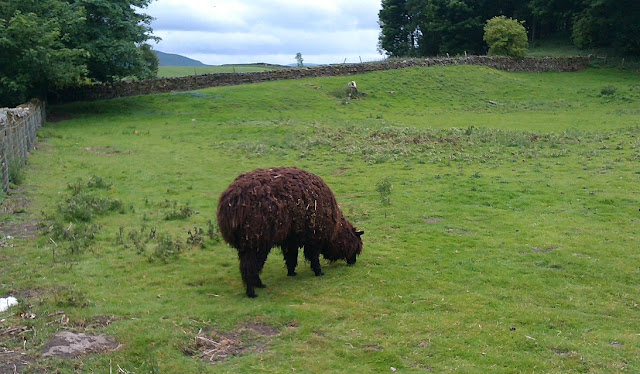 And dead moles all in a row.  (Ugh!)
Then we turned around and went back to find the right path.  Walking across the field from West Bolton to East End Farm we were lucky enough to get to see both Oyster Catchers and Lapwings close up.  They were everywhere, screeching and pee-whitting,  flying around our heads.  It was quite cool actually.
We also got to see Ragged Robin, a flower I've never seen before (Ed identified it), and banks covered in gorgeous blue Speedwell.
From Carperby we made our way to St Joseph's Wood and from there down to the Lower Falls.  If you know to keep walking on the gravel path, there is a little drop down to the levels below Lower Falls.  Definitely the best view of them.
Then it was back to the car park to offload our kit and another little treat to see this old timer.  (Not the bloke, the bus ).
Finally we went back over the bridge to the Yore Mill coffee shop on the other side.  Definitely the best place for cake and a cuppa, nd they sell some of the best icecream in the area.   I didn't have any cash though........ (another fail!).  Good job they take visa.

It was hot and muggy with the occasional bit of drizzle.  We walked just over 8 miles (partly cos we went the wrong way), with 850ft of up.  I really enjoyed the day out.  Thanks Ed.

And sorry to anyone reading about the quality of the photo's.  I'll do better next time.  Promise.

Oh and by the way, the map of the route. 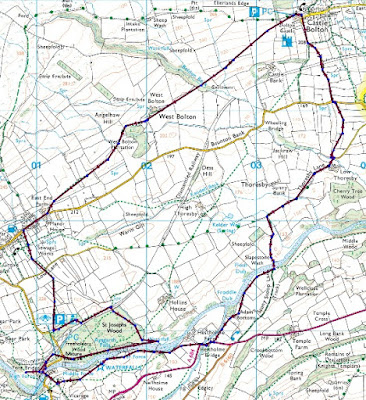