High Cup Nick with a twist

But not the kind of twist I'd recommend! This is a brilliant walk which we did in August, and it's not as hard as it looks. I have no idea why I didn't take many photos of the early part of the walk, or the end? But I did manage to get pictures of the best bits.

You can see from the map we parked in Dufton and set off along the Pennine Way from near Billysbeck Bridge. The track becomes an old drovers road and takes you up hill with Dufton Pike on your left. From the track Dufton Pike is a near perfect little dome, I really like it.
We continued on the track up to Peeping Hill (fantastic name), and then onto the well trodden path that follows the North side of High Cup Gill. 'Cept it became less trodden and more hidden. I thought this was odd, because it's a well used path and it shouldn't be hard to follow? I think we must have been up above High Pots before we realised the mistake. A sharp left and a steep climb and we were back on route. No harm done. (Peter was leading of course, so naturally it is his fault that we'd lost our way slightly).

We continued on Narrow Gate Path, happily pottering along and loving the views when it happened. The track is boulder covered and my right leg missed its footing and twisted slightly as I almost fell. My left leg stumbled to keep me upright but my foot got jammed behind a rock. The ligament twisting turn to my left ankle was excruciating.

Concerned walkers tried to help as my ankle screamed in pain. Luckily, a few minutes later the initial hurt had gone and I was left with a tender joint.   It was alright as long as I kept my foot level. I thought about the walk ahead and the one behind and I decided I could continue. I decided that the short sharp way down was preferable, thinking that all I had to do was keep the foot flat. Surely I could manage that?

So we walked on and I watched where I put me feet. It was a brilliant day, and the views up there are magnificent.
We reached High Cup Nick, and sat for a few moments enjoying the scenery.
There were loads of other walkers there, I could hear some of them talking.....

"Don't get too close to the edge!"
"I can't even look over"
"There's no way you could get down there!"

But really it's dead easy to get down to the valley bottom from this point. OK, it looks difficult, but on closer inspection, you'll see it's an easy scramble for the first bit and then a steep grassy slope.

The grassy slope concerned me at first, but I used my behind. That is, I went down a fair amount of the hill sitting on it, which also took the pressure off me ankle.

The next bit was the bit that we hadn't thought about properly. Remember I had to keep me foot level? Well! It was a bit difficult to do that whilst negotiating all these rocks, but not keeping it level was far too painful. I made it across slowly and with the help of sticks.
Then it was the nice grassy bit across the bottom of the valley, the last time we walked here, it was really wet and boggy, but today was really nice.
Negotiating the route across from Harbour Flatt to Keisley Bridge wasn't easy, as it's not signposted, but we did manage to find our way out of the farmers' field and onto the road. By this time, my ankle was starting to ache, so we decided to take the flat road route all the way back to Dufton, rather than the ROW marked on the map below. 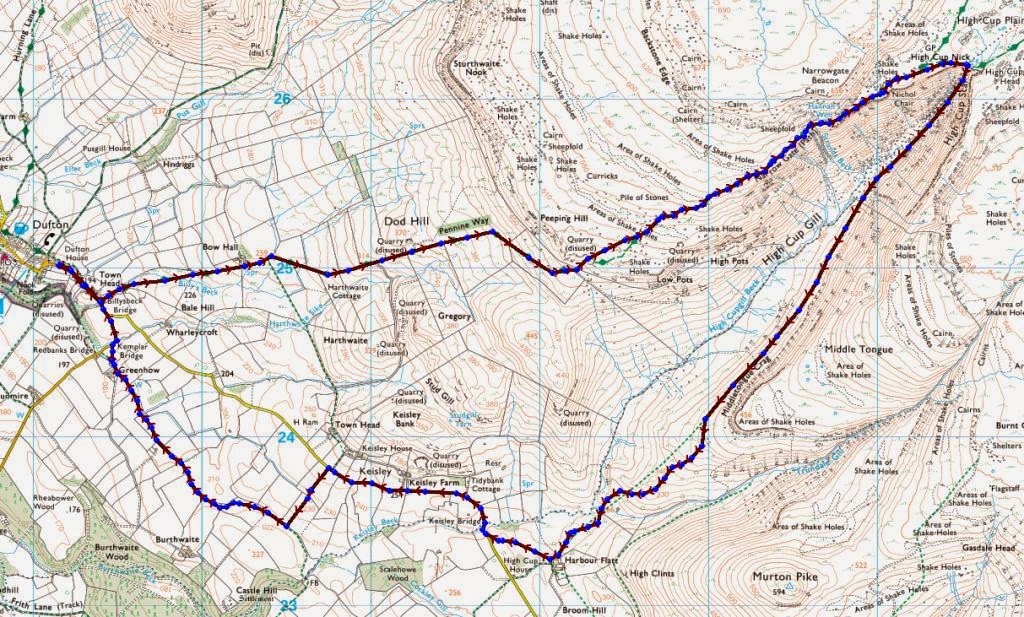 Once again a brilliant day, the route shown on the map is just under 9 miles with 1660ft of ascent.