Todays walk was a meet up with a few guys from the Walking Forum.  I’ve met The Very Knowledgeable Kev and John before, but Peter and his lovely dog Scally were new aquaintances.

So, after feeding the meter all me pennies, I said Hi to the guys, and we set off on our merry way.

It was a good walk. The sun shone, there were loads of quirky features to catch the eye, and the hills weren’t so steep that I couldn’t breathe when I got to the top.  I also had a personal target of getting to the summit of Ingleborough without the attractions of  “wet” and “miserable”.  This was achieved, but I think I should have added “or freezing wind!”  We found a bit of shelter whilst we where up there for our little rest stop, but we really could’ve done without the extra strong doses of cold fresh air.

We headed out of Clapham along Thwaite Lane.  There's a bit of a slope to start off with, but it eases out to a steady walk until we reached gate where we turned off and headed for Robin Proctor's Scar.
Through the gate and then we headed towards Robin Proctor's Scar. There are a few stories telling how the cliff got it's name, such as this The story of Robin Proctor, or this text from a book 'Ingleborough Landscape and History':

"Robin, so the story goes, was a well-established yeoman farmer from somewhere south of Ingleborough. One day he was returning to his home, taking the direct line over Thwaite Scars rather than sticking to the safer but longer track, when he was caught put in thick fog. Sadly he lost his bearings and tumbled with his steed over the edge of the cliffs, being dashed to pieces on the rocks below. Its a nice story but has at least one major pitfall: the ground up there is so rough and rocky that no one would knowingly ride a horse across it. On the other hand there is an entry in the Clapham Burial Register, dated 12 August 1677, recording the death of Robin Procter of Hazle Hall farm (now near Clapham Station) 'falling frrm a cliff at Norber."

Many thanks to the Very Knowledgable Kev for providing the stories.


Up near RP's scar is Norber Brow and the Norber Erratics.  These great lumps of rock were left behind by the glaciers of the last ice age, which I think makes them around 15000 yrs old.
Norber is an area of limestone which means it has a habit of dissolving away - creating wonderful limestone pavement scenery above ground, loads of caves underground and then eventually shakeholes which may hopefully connect the two.
So we carried on our walk along the slope of Crummack Dale until we reached Crummack Farm.
We walked on past Crummack Farm, through what used to be a settlement, according to the OS Map and on to Beggar's Stile - which is a bit like scaling a wall when you come at it from Crummack Dale.   From there we crossed the amazing limestone pavement to reach Thieves Moss.
Time for a sit down, lunch and a photo
Onwards and upwards after lunch, we went through Sulber Gate and started along the clear path heading for Ingleborough summit.  It was along here that Scally demonstrated her love of water when she discovered a small pool.  She was in and swimming round and round before we knew it.
But the summit beckoned, and on we went, up the Swine Tail heading for the top.  Thing is, so was everybody else.  It seemed as if a couple of busloads of families had decided to make their way up the Swine Tail at the same time as us.  We were surrounded by little people, of varying sizes and noise levels.  A very busy summit.
Time for another little break to enjoy the views......  When we found somewhere out of the wind that is!
As always, once you've got up, you have to get down.  I was sorry to leave the views, but definitely happy to get out of the wind.  Easier said than done as it happens, the wind stayed with us for a fair part of the descent towards Little Ingleborough.

Next it was Gaping Gill - a gaping hole in the ground into which Fell Beck normally disappears. Except Fell Beck was nearly dry today, so it trickled over the edge.  I like Gaping Gill, Peter and I have visited a couple of times before,  both visits have had a certain amount of adventure about them:  Descending into Gaping Gill and Ingleborough and the slippery Fell Beck.
Our last highlight was Trow Gill, quite a feature to be honest.  I would have got more pictures, but for some reason, walkers kept appearing and getting in the way, honestly, you'd think they'd be a bit more considerate! 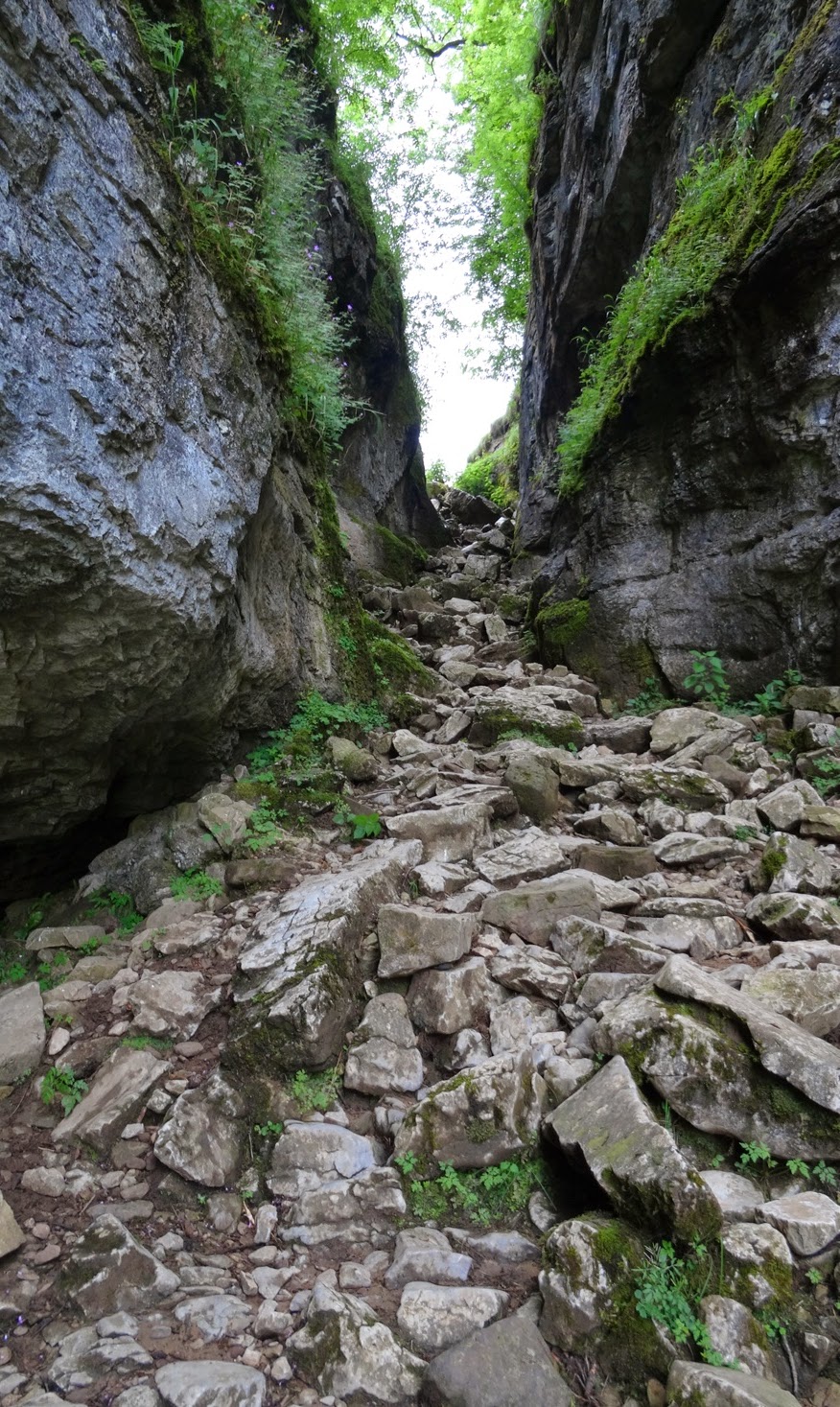 Actually, Trow Gill wasn't quite our last highlight.  The route meets up with Clapham Beck and follows it down past Ingleborough Cave (Ice creams!), and then on to "The Lake" of Ingleborough Hall.  This part of the walk is actually very lovely

The lake is also very lovely.  So lovely in fact, that Scally decided that once she'd got in, she wouldn't get out.
She swam the distance that we walked alongside, spending a fair bit of time chasing ducks.  She really is a water baby!
And that was it, the end of another wonderful day.  Thank you to Kev, John and Peter for the company.  12 miles and tired legs.  Awesome!