A Dales Weekend with the Walkers Forum - Swaledale

So, after a wonderful walk in Wensleydale yesterday, it was time for something completely different I'd decided to show Swaledale to the Walkers Forum  members, and take them to see the devastation caused by the lead mines of the 19th century.

We'd arranged to meet at Surrender Bridge, which, one of the forum members pointed out "is in the middle of nowhere!"  Despite a good turnout of the folks who'd joined me yesterday plus three, the sun decided it couldn't be bothered and we were left with dark clouds and drizzle for the whole day.  But Walkers Forum members are a cheerful bunch, and they certainly weren't gonna let a bit of sogginess spoil the occasion. So, after a bit of a delay, (cos we'd started in the middle of nowhere, which is hard to find apparently), we set off on a big loop to investigate the lead mines and smelting mills of Gunnerside Beck and more.

(By the way, many of the following photographs were taken during a different walk - you'll recognise the ones taken during the forum walk -grey skies and rain spots on the camera lens!)

I remembered me manners this time, and made sure we had a "banana break" about a quarter of the way along.  And I remembered to find somewhere out of the wind and I even provided sweeties.  (See, my walk leading skills are improving.... (Sort of......  As long as you don't mention the word compass!)).

After the break, we continued our way around the side of Brownsey Moor into the little dale cut out by Gunnerside Beck and on to the first set of ruins and spoil heaps left by the mining industry. Weirdly, the torn and ruined landscape is striking and attractive. The spoil heaps and the mining scars somehow fit into the wild beauty of the surroundings.

The walk continues alongside the beck, only now it's a gill, Blakethwaite Gill to be precise. It's odd to think that during the mining days, many people would have walked these paths daily to get to work and back. Now only a few people use them, to see the remnants of the industry those first walkers laboured in, to wonder at past lives, ruins and a changed landscape.

We walked up to the point where Blind Gill joins Blakethwaite Gill. There are more old smelting mill ruins here and the whole area is wonderfully photogenic.

From here, we continued alongside the gill until we reached the Blakethwaite Dams.  I've never been here before, which is rather remiss of me, cos it's wonderful. We ate lunch behind the ruined dam at the top this waterfall.
Up until this point, we'd walked over rugged ground, crossing becks and boggy patches, constantly watching where we put our feet.  Thankfully, there were gentlemen among us ready to offer a helping hand across the difficult bits. Our route back was so much easier, as all we hat to do was follow a track - back to the hushes above Gunnerside, and then across Melbecks Moor to Hard Level Gill.  In fact, it easy enough for the Three Musketeers to start playing I Spy. 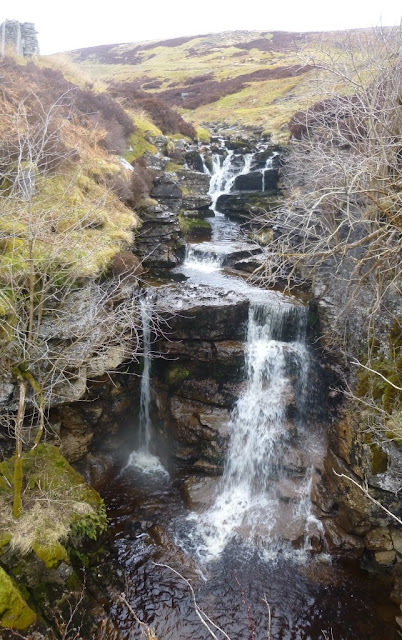 Nobody got that one, (we think Chris was being a bit tooooo clever,), the answer was epidermis.

Exposed as we were on the high ground, the wind blew hard and the drizzle was cold and sharp, but it wasn't long before we got over the moor to Hard Level Gill, and then on the little waterfall, Hard Level Force.

Our last stop was what is probably the most well known set of ruins of the area, The Old Gang Smelting Mills on Old Gang Beck.  If you look around the here, there is an old peat store, and more ruins nearby.  Information boards help you identify what's what. 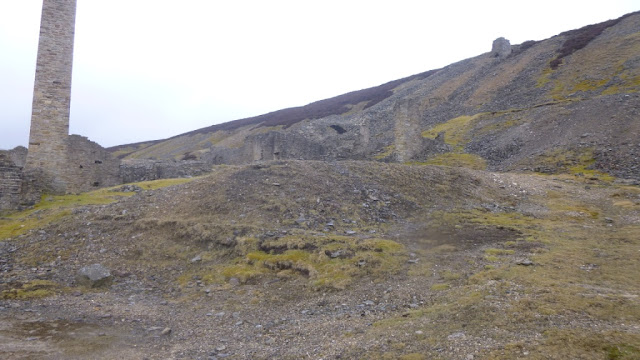 And then, we were quickly back at Surrender Bridge.

It was a lovely walk, despite the weather.  My walking buddies were all excellent company and seemed to really enjoy the route, all of them wanting to do it again.  (Which is class and made me feel dead proud of little Gunnerside and Blakethwaite).  Thank you to the Three Musketeers, Helen, Lynn, Karl and Anne for keeping a smile on their faces despite the weather, and for letting me show them one of my favourite places in The Dales.

11 miles, and somewhere between 1850 and 2400 ft of ascent (depends which map loading or gps system you use).  Here's a map for anyone else who wants a go 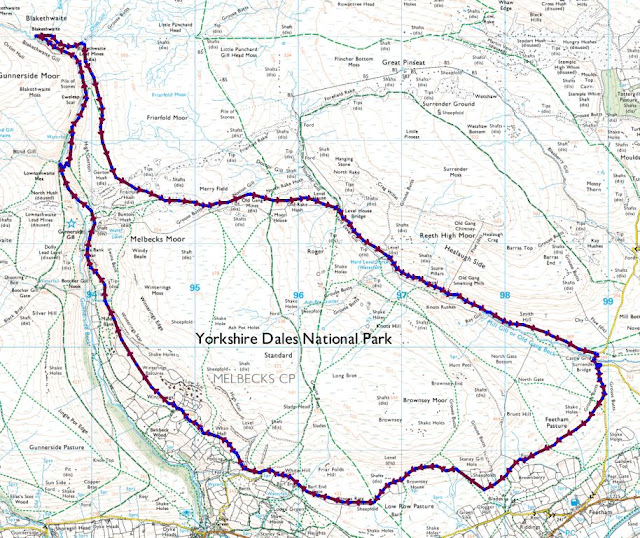