The start to this walk was described as “Street Gate (near Malham Tarn and the start of Mastiles Lane)”. If you know the area, you can work it out. Me? I had absolutely no idea where the starting point was, but it looked a good walk, so I said I’d go. Fortunately, a car meet with Kev and Dot in Settle sorted out my navigational issues, and we started our walk from the car park on Street Gate around 10am.

Once again, the weather wasn’t in the best of moods when as we set off, all dark and grey. In fact, the clouds had come down to brush across the top of the low hill on the other side of Malham Tarn as we passed. They seemed to lift just enough to stay above us as we walked up the slope towards Middle House Farm. 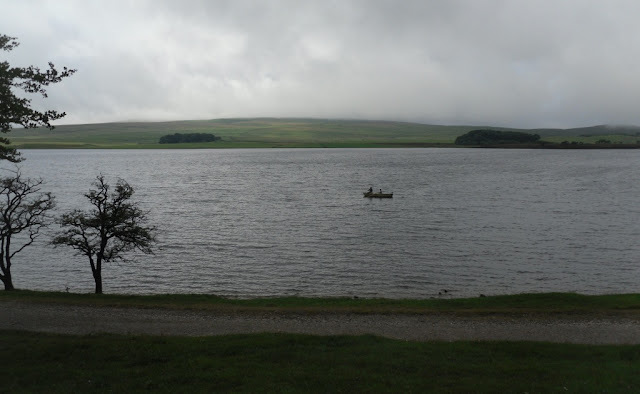 Close to the farm is where the path joins Monk’s Road, so called because the monks used it. Kev planned the walk and knows the area very well. He explained that in years gone by the Monasteries controlled the Dales, (he didn’t actually put it in these words, but you get the drift) –


“Following the Norman Conquest (1066), a new breed of monks began to arrive in the North. A multitude of continental monastic orders moved in, all with different ideas about how to best serve God. The Northern Mission got off to a late start, so the widespread Benedictine monks were never a great force in Yorkshire. However, there was plenty of available land and generous lords eager to show their piety by donating it to a monastic foundation. The Augustinian 'black' canons were influential, but it was the strict Cistercians who really came into their own in the county, making Rievaulx the centre of their order in England.
For almost 470 years, the monasteries dominated Yorkshire life. The monks were neighbours to everyone. Yet, suddenly, they were gone: swept away by the greed of 'Bluff King Hal' in the 1530s.” (Extracted from Britannia.com)

It seemed the path we were travelling on might have been part of a main route from village to village across the Dales. Walking along, it is easy to imagine it as a long ago road or track. Although it is mostly grass now, you could see and feel the foundations of what was probably a busy route. We followed it through the classic limestone landscape. Stone walls and scars, scattered rocks white against the long grass and everything looking just a little bit wild and windswept. Beautiful. 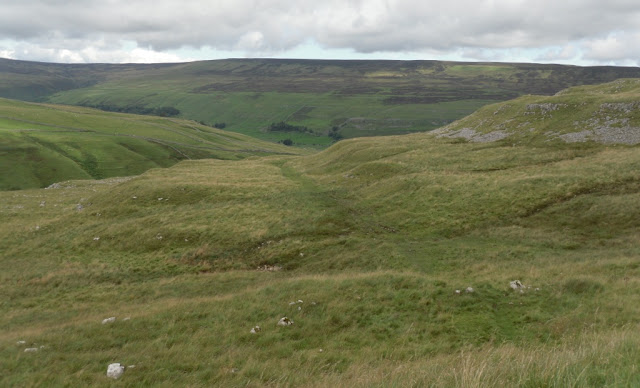 All the while the clouds continued to lift until eventually the sun broke through. Blue skies were on their way.
We were able to look across and down into the steep sided gulley cut by Cowside Beck as we made our way towards Littondale and the pretty little village of Arncliffe. 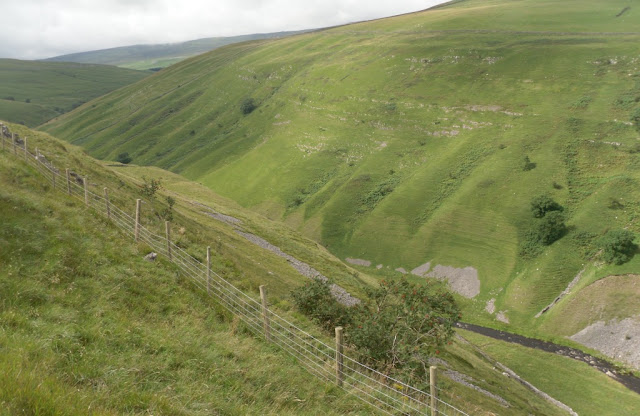 Arncliffe’s claim to fame is that it was the original setting for the fictional village of Beckindale of Emmerdale Farm.  There is a very odd pub there, called the Falcon Inn. Odd because it doesn’t have a traditional bar or pumps, and it’s like being in someone’s house. We sort of stood in the hall with the bar area in front of us, looking at someone’s washing hanging in the kitchen through the door on the right. Weird. 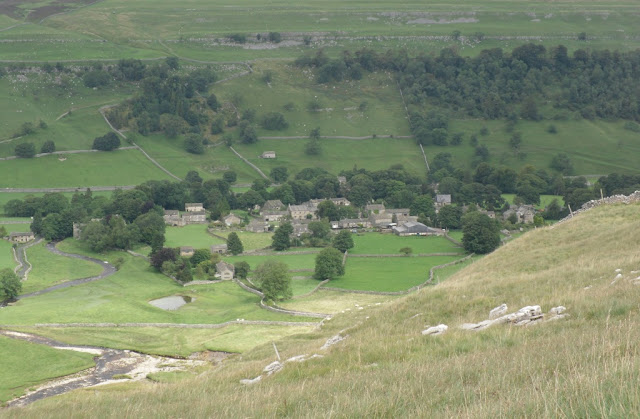 A brief stop before continuing the walk under blue sky along the riverside, surrounded by green fields and with the added bonus of being able to watch a dog and farmer herding the sheep. It was better than any TV advert can portray, traditional England at its best. 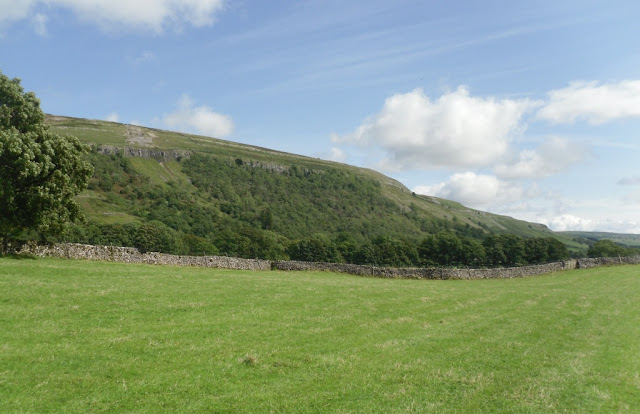 At Out Gang Lane, it was time to turn and head back, past Arncliffe Cote and Hawkswick Cote, we followed Cote Gill up to Linseed Head. There’s a wonderful waterfall on Cote Gill which isn’t marked on the map. If we had followed the path, we’d have missed it. But we had the very knowledgeable Kev, who took us off road to walk along a sheep track at the side of Cote Gill. I am so glad he did. The little beck had etched a steep sided gulley through the limestone, creating a stunning little ravine. Awesome. 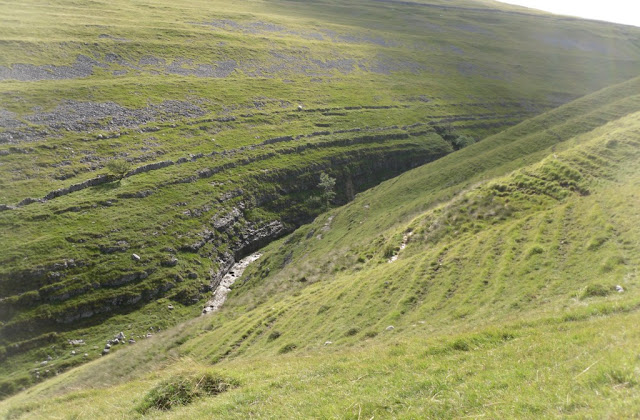 And the waterfall too. Sadly the sun was ever so slightly in the wrong place to get a good picture. Lovely though. 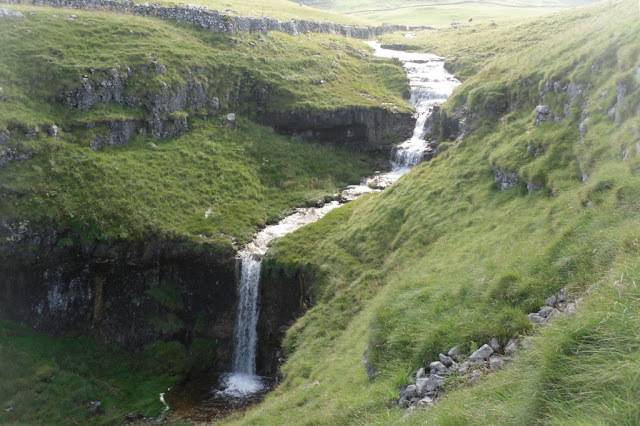 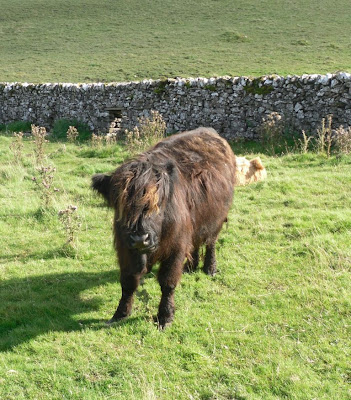 Up on Linseed Head, not only did we enjoy the fantastic views, but also the company of the cutest Highland Cattle. A large number spread across the fields around us. The massive horns on the adults looked menacing but their calves were adorable. These animals were so placid, they barely moved as we walked through them.

On the high ground, past Lee Gate High Mark and Clapham High Mark, the air was clear, the sun was high in the sky and the views were glorious.
And then it was time to make our way downhill.
Our last challenge awaited in the form of a “Ford” at the point where Gordale Beck meets Great Close Mire, and about four other becks I reckon. Water flowed into this point from everywhere, and I mean everywhere! Across the fields, through fences and gates and even the walls. Kev described it as a raging torrent. OK, maybe not quite raging, but an awful lot of water to be “forded” We looked this way and that, walking back and forth looking for a way across. There wasn’t one. In the end, there was nothing else we could do but paddle, and hope our boots kept the water out. 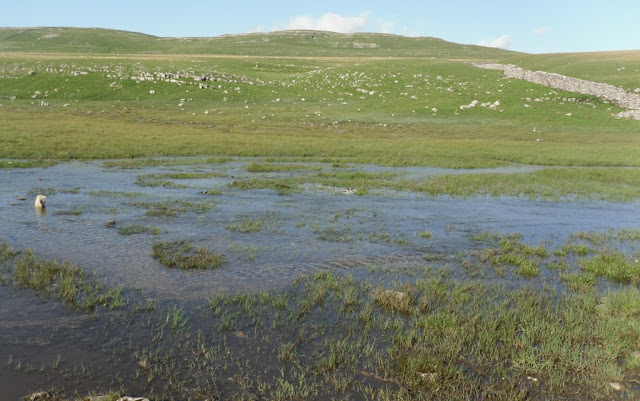 Mine didn’t!
Not a problem, we were on the home straight now. Within a few minutes, we’d reached Street Gate where it joins the Roman Road of Mastiles Lane, (Ahhhh, now I get it), before finally reaching our cars about 5pm.
Another brilliant day. I especially enjoyed the views of Cote Gill, and the waterfall, and up onto the tops around Linseed Head. Absolutely wonderful. Thank you to Kev for showing us the way, and Dot for her company. 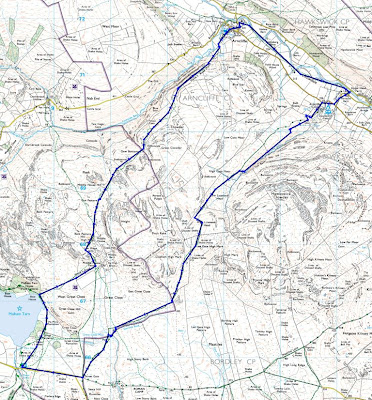