A Foot Bath in the Lake District. Watendlath, High Tove and Blea Tarn.

Hmmmmm….where do I start? How about Thirlmere? Yes, that’ll do. At the Armboth Car Park at about 1pm. It was a glorious afternoon, and Peter had worked out a 6 mile route. The target was Watendlath on the other side of High Tove, and just for kicks, the start of the route was more or less straight up  Yep! A nice steep bank to get the blood pumping..... Yeh right! ....I was trying to keep me lungs in my body again. 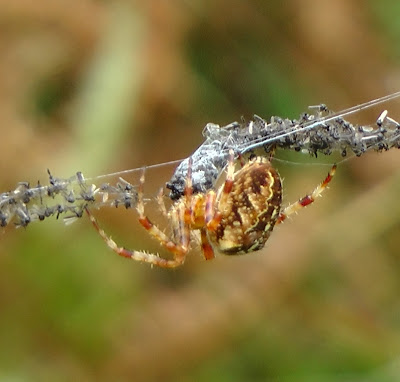 Fortunately we were stopped by a rather large garden spider. That is, Peter walked into its web that was strung six foot across the path. He did make lots of “Eeeuugh” noises as he danced around brushing web and dead flies off himself. The spider was big, and we took ages trying to get a good picture before we totally destroyed its web to get past. My camera couldn’t focus well enough, this picture is from Peter.

Huffing and puffing, (well I was anyway), we continued up. There are benefits to such a steep walk, the views opened out quickly despite the trees. It’s a good job too, I needed the photo stops. 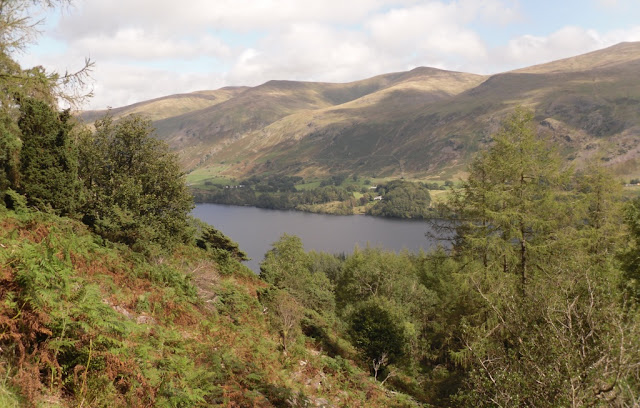 Up we went past Cockrigg Crags and out of the woods. We were now out on the fell, long grass waving in the wind. Views spreading out around us. Really, really, lovely.
It just goes to show how looks can be deceiving. As we walked, the ground got wetter and wetter until water oozed up around our boots with every step and our feet sunk into the ground. It was like walking on a very, very, wet mattress. We tried following the path; we tried not following the path. We tried hopping from one lump of grass to another, seeking out boulders and anything that looked the remotest bit drier than its surrounding. It seems however, that we cannot walk on water and in the end our feet were sloshing around inside our boots.
The sun was warm, the sky was blue, and bog slogging is hard work! Peter was perspiring, I, (being a lady) was “glowing”. I pointed out to Peter I might as well have poured the water I was drinking straight down my back.
We got to High Tove, (a Wainwright) and it all started to become worth it. We could just see Derwent Water on our right, and over to our left, the southern fells were coming into view.  Beautiful. 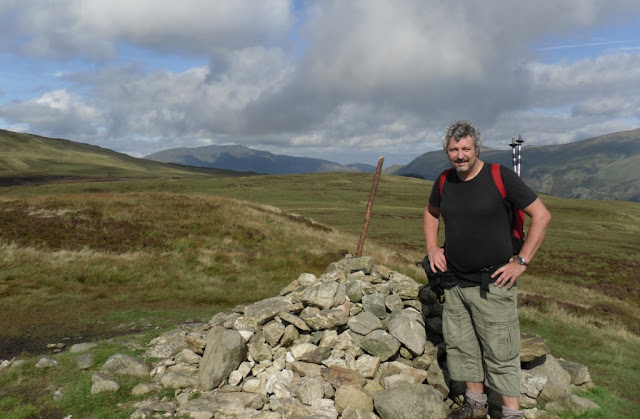 We continued our splosh towards Watendlath. We didn’t quite get to the farm, but looked down from on high, enjoying the view of it all.
Now we turned left along a slightly drier path (muddy, not sploshy), heading for Blea Tarn. We were looking for somewhere to enjoy a late lunch. Rough Knott provided the perfect spot, even laying on a rock to sit on with added footrest. Boots came off, socks were wrung out and feet were aired whilst we enjoyed a meat pasty and fantastic views. 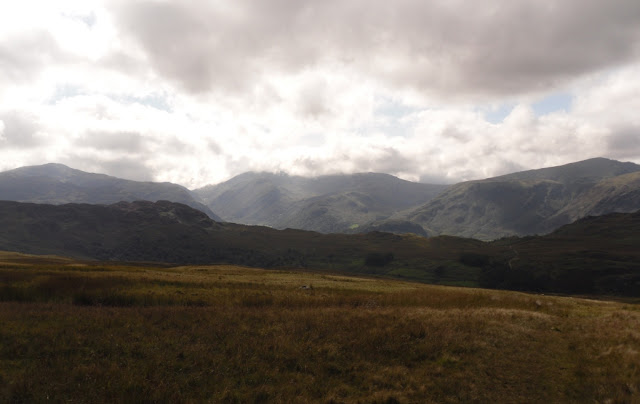 With slightly drier socks we set off again towards the very pretty Blea Tarn. The walk planned was a short one, and once we reached the Tarn, we had to decide whether to continue along the clearly marked bridleway which was easy to follow, or take the original shorter route Peter had planned:- a black dotted line of a path back towards Thirlmere. Taking into account the time, we went for the shorter route.
Thing is, there was no path. We looked all over, what was on the map was not on the ground? Peter did a clever demonstration of compass reading skills and we set off in a line heading for that lump of rock over there.
Now we were back to bog slogging with a bit of heather stomping. Between grassy tussocks, myriads of little water flows drenched the ground. The occasional dry rock was bliss, as were the stretches knee high heather with drier underpinning. And eventually……Whey Hey!....... Bracken! I’ve never been so pleased to see the stuff. It meant the ground was dry and solid.
Eventually, we got to the edge of the fell and the start of the forest line. Here we went for a little foray into the woods to see if we could find an interesting way back to the reservoir, but a cliff drop got in the way, so we backtracked and continued as planned along a fence line (still wet), and through the woods to the car park.
I was so glad to get out of those boots! 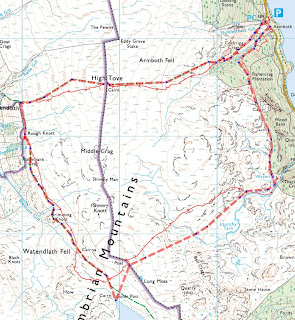 Back at home, I downloaded the walk we did and overlaid it on the map against the walk we planned. Turns out the black dotted path is actually a fence line, but we reckon it’s also a path. No matter, even though we didn’t actually follow it, Peter’s compass made sure we went in the right direction. And I learnt something about using one too. (Don’t ask me what it was, I’ll have forgotten by tomorrow).
Not the driest of walks, (Wainwright collectors: Have your wellies ready for High Tove), but walking across windswept fells under blue skies, with stunning views and the rest stop at Rough Knott more than made up for wet feet.

Next week I’m back in the Dales. That’s what I call getting about a bit.