Finally!  A weekend day where it wasn’t going to rain all day…..  Well, not until 4pm apparently.  So…. time to get out in the hills.  I’ve been wanting to walk out to the lead mines near Gunnerside for some time, but I’m not used to navigating the Dales by myself, and I kept putting this walk off until I managed to drum up some company.  I’m obviously not paying enough, (a mars bar and a packet of mini cheddars), so today I had to take the plunge and go on my own.
Using Google Earth I'd seen that my planned route wasn’t that difficult and all the paths were clear and could be seen from the satellites.  If anything, the problem would be there are too many paths and tracks, and it would be easy to take the wrong one.  But it did look like finding my way was going to be alright, and I had maps and my GPS.   So, taking it easy as usual, I started from Surrender Bridge at 11am. 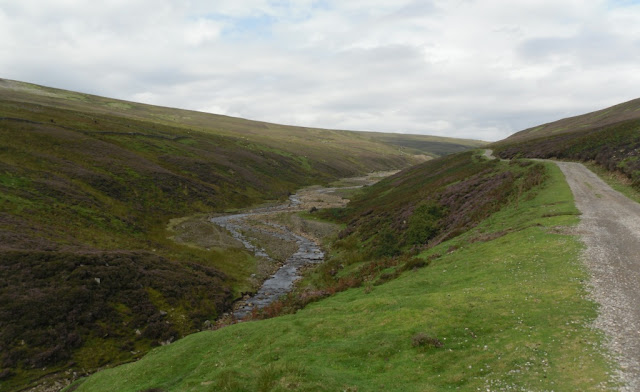 The good thing about being on my own was that this was now my walk, I could potter and wander wherever I wanted, which I did.   The old buildings interested me.  Like everyone else, I wanted to know what happened in them.  Why was that bridge there?  Why this ditch, and that tunnel?  And why were these pillars up there? 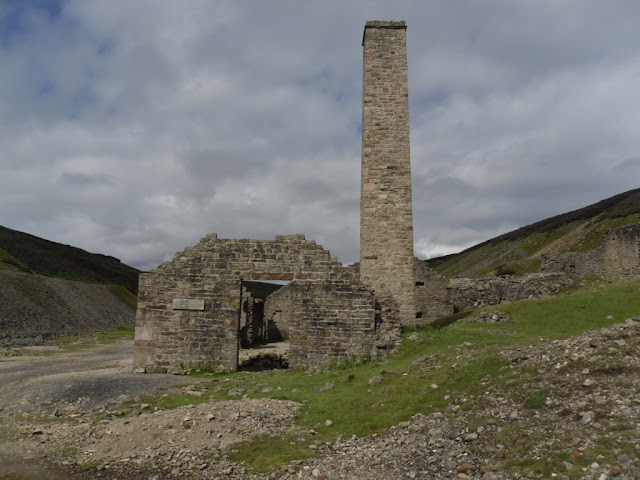 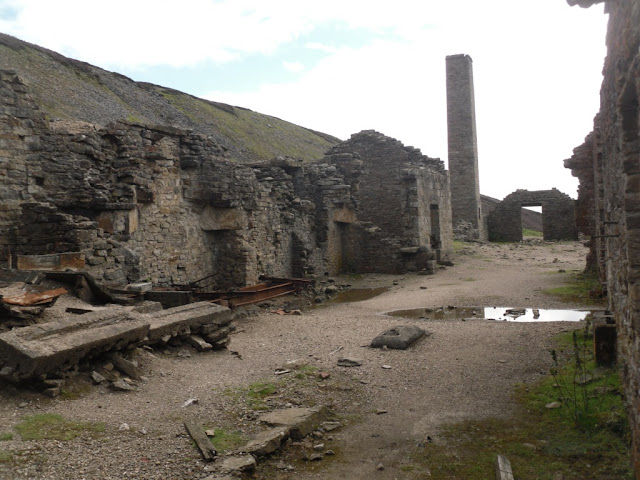 An hour after I started, I was only a mile up the track investigating the “Stone Pillars” above the Old Gang Smelting Mines. 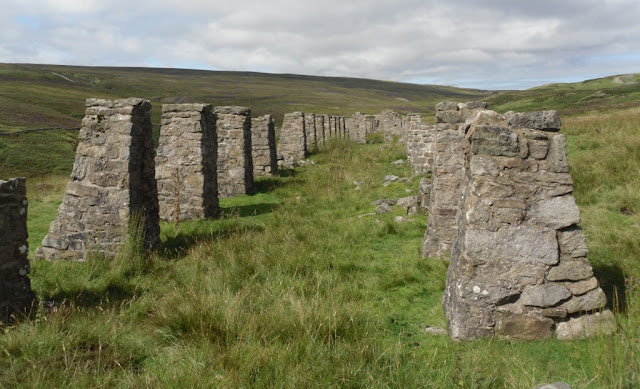 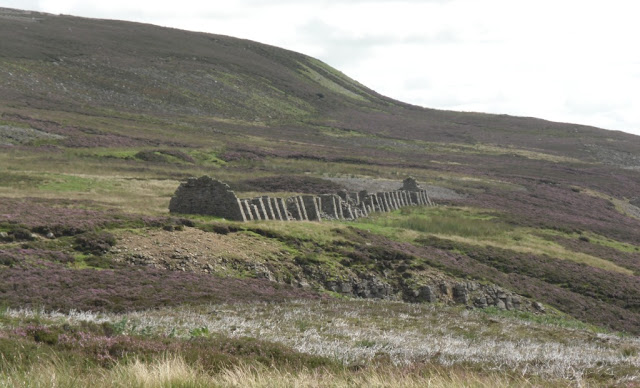 As usual I took loads of photos.  I might of taken a few more, but for some reason, August is a good month for flying things, particularly crane flys.  Every time I lifted the camera to take a picture, something leggy would fly into my face, or land on my hand.  My natural reaction is to sweep it off in panic.  (Far too leggy and spider like, horrible things).  This resulted in me hitting myself with the camera a couple of times. (Ouch!)  Luckily it still worked. 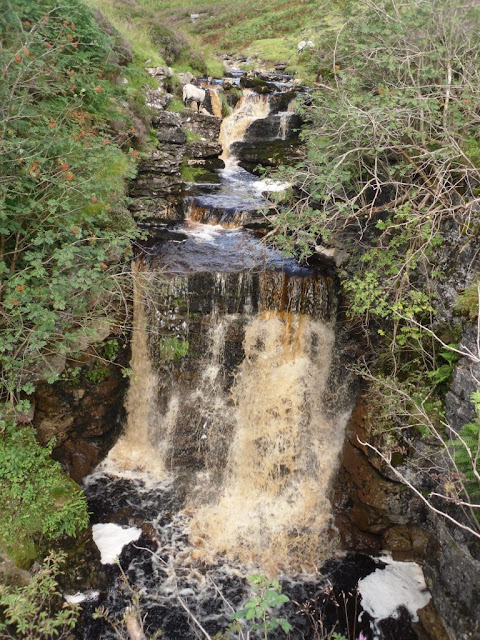 Old Gang Beck, also known as Mill Gill, was almost the colour of black coffee, and after the rain of yesterday, the little inlets and streams rushed and bubbled huge volumes of dark brown water down the slopes to join the beck.  The sight and sound is wonderful, very tranquil.

I turned off the track to take a look at Hard Level Force.  I like it here, it’s rugged and rocky and how I always think of the Dales. 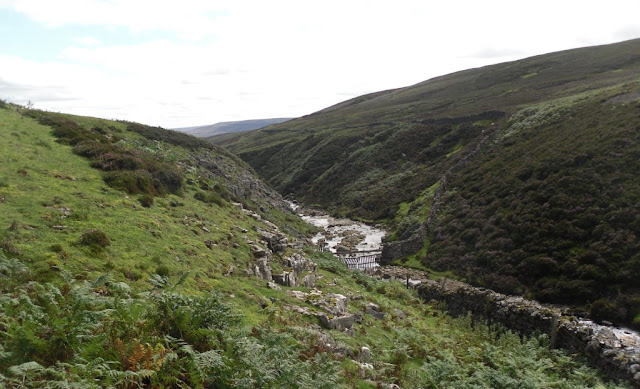 Back on track and take the next bridge left to head over Brownsey Moor towards Gunnerside.  Remember what I said about too many tracks?  The area is  a favourite of the shooting fraternity, judging by the grouse butts, and vehicle tracks which run every way across the Moor, I took the wrong track.  No matter, I got back on route and eventually arrived at the bank overlooking the little valley cut by Gunnerside Beck.  Here I had my lunch.  Wonderful views. 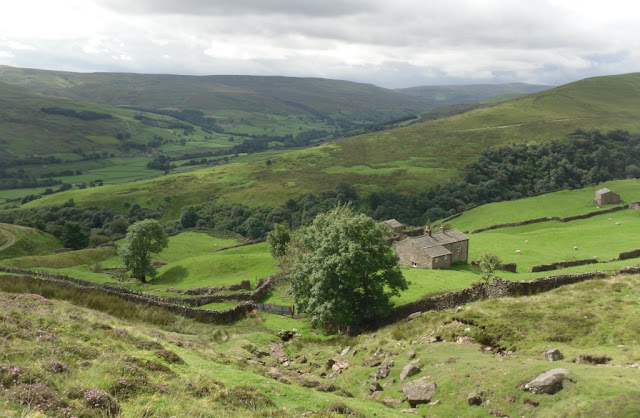 After that came the charming farms at Pottering and Winterings.  It was now about 2 pm and the weather man did what he always does, and got it wrong.  Sadly the rain started.  And I had been hoping for at least another couple of hours dry walking.
So I pulled on my bright blue, in your face, waterproof jacket and hurried along the grass path (past this):
to more buildings related to the lead mining industry.  It’s an area of devastation that I find weirdly attractive.  Eventually, Mother Nature will reclaim what’s hers and return everything to green.  But I think the valley will keep that rugged, torn apart look that so many people come this way to see. 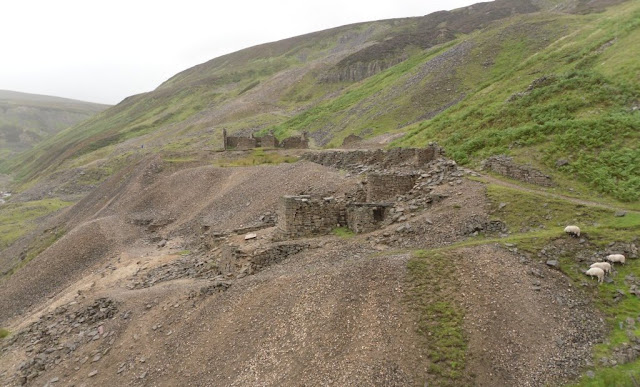 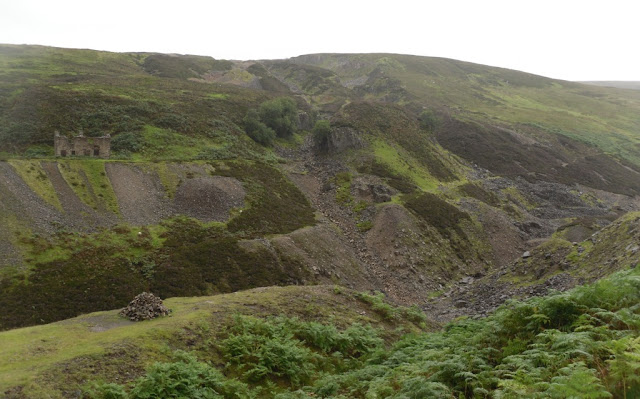 Then it’s a right up the only steep bit of the walk.   A couple stood at the bottom watching me.  I think they were wondering whether or not to follow.  It’s not as difficult as it looked and I managed fairly easily.  I even stayed upright!  They did make me feel all smug and like a proper walking roughie toughie when they turned to take a different path. 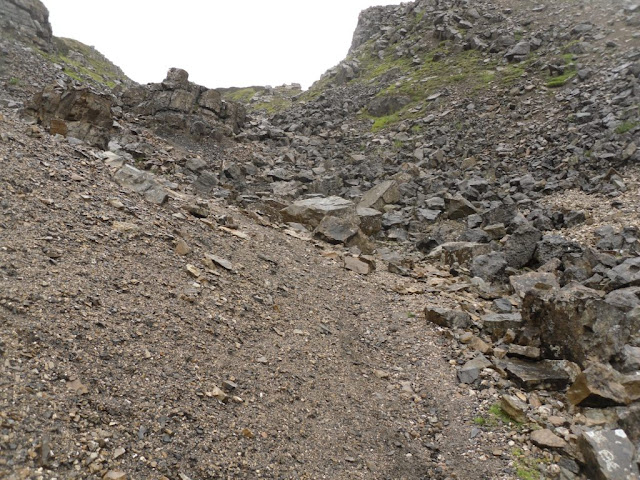 It wasn’t too long before I was up at the top and crossing Melbecks Moor Heading back to Hard Level Bridge.  I was hoping to see more Old Gang Mine buildings as the mines were marked on the map up there, but I think this is the actual mining area, and the path goes through the old quarries.  Not very pretty really. 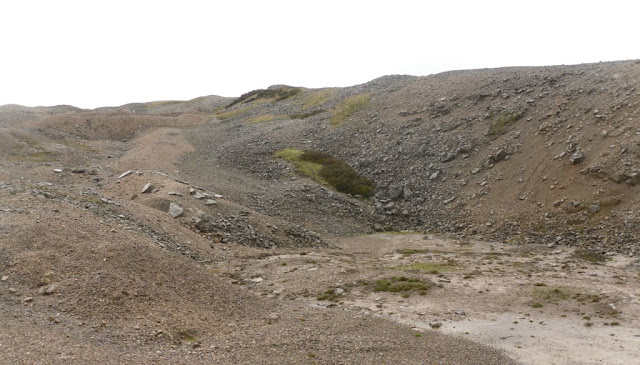 Once I’d got to Hard Level Gill I turned right and headed back down Hard Level Gill, Old Gang Beck, Surrender Bridge and my car.  It was still raining, on and off, but the sun was beginning to show through the clouds and the afternoon was getting to be much more pleasant. Rain still threatened though.
My final stop of the day was something I’d seen at the start.  As I parked the car, I noticed across the beck some old buildings that looked like part of the lead mining industry.  So I headed over for a nosey and was very pleased that I did.  Inside this building are a couple of boards, explaining how it was used, what those tunnels were, (chimney’s, weirdly), and what the pillars that I’d been investigating earlier were. 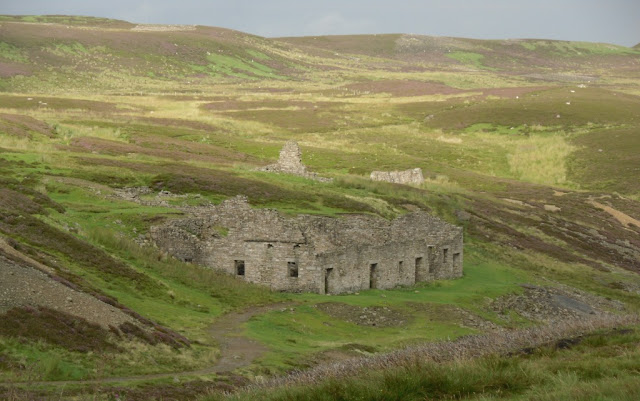 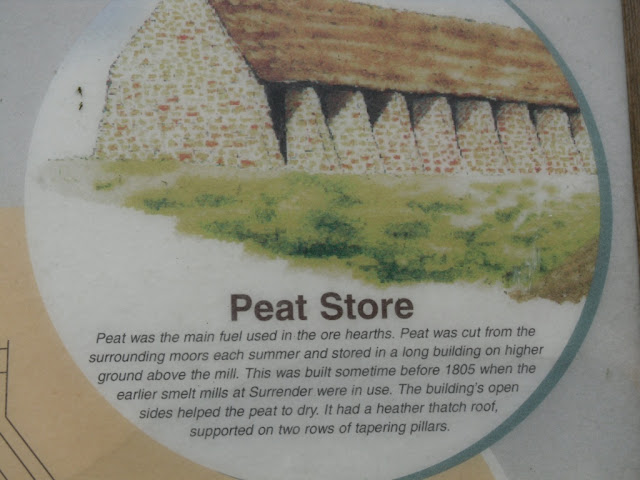 All in all a very good day. The walk was about 10 miles. I took 6 hours over it and really enjoyed it. 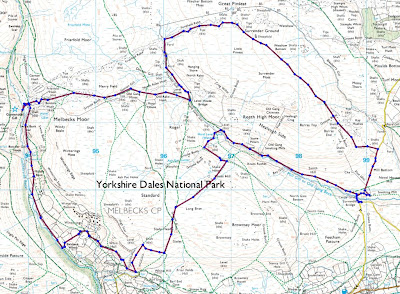 This is my planned route of about 11 1/2 miles. Due to time mostly, I cut off the Great Pinseat loop and turned directly back to Surrender Bridge.  I also have to admit to taking the odd wrong turning - I didn't walk by the river, that weird chimney thing is on the path higher up.  :-)