We went to visit our friends in Livingston, Scotland,  for a very entertaining weekend which we started with a day in Edinburgh.  The Tattoo is underway up in Edinburgh Castle and the Fringe Festival has taken over the city centre.  The Royal Mile has been closed to traffic, and the place is just FULL of people.   Fantastic. 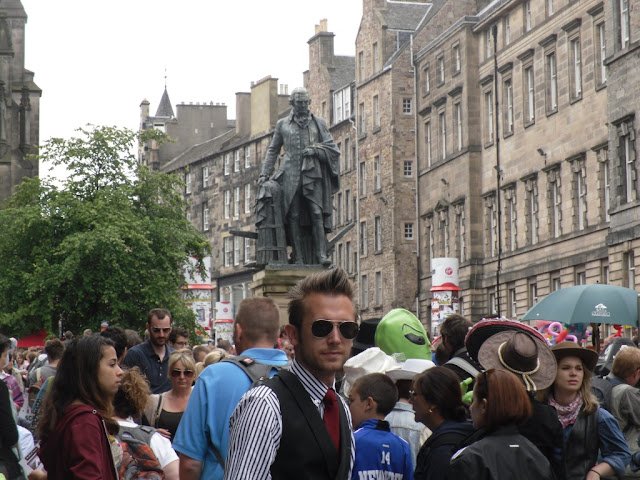 We took the train in, to save problems with parking and alcohol consumption. From the moment we arrived, we were captivated.   Some of the street acts were absolutely brilliant.  We watched a hysterically funny magician take the mickey and insult everyone in the audience.  Then there was equally funny American on a unicycle and later a flaming torch juggler that lost his pants.  There were living statues, the "most pierced woman", spoon benders and japanese contact jugglers.  Musicians everywhere, (although we didn't see a set of bagpipes all day), and the constant, constant attention of leaflet wielding youngsters.  Their job was to entice you into one of the several hundred stage performances going on in the city.  There was everything you could think off, comedians, bands, magicians and jugglers, plays and drama's, opera, musicals, even a bit of relationship counselling we discovered.  (By accident......more later) 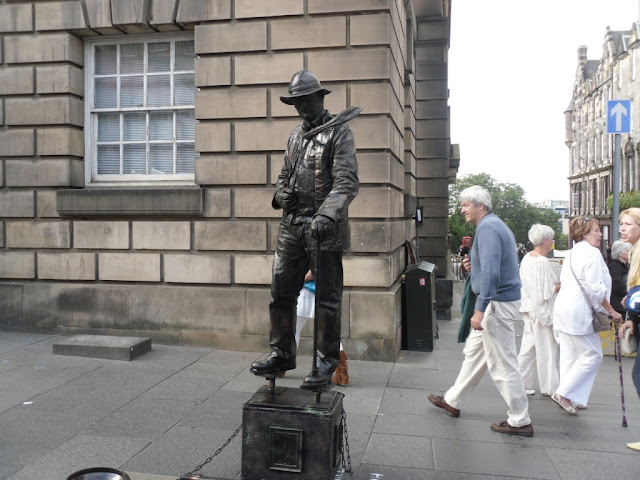 So we meandered up and down, our attention constantly drawn in all different directions - here a martian, over there a choir.  Stilt walkers, a balloon man, men dressed as soldiers from the civil war, a woman in a torn wedding dress, on and on it went.  Mind boggling.
As we wandered, we decided we'd like to see one or two of the shows. The first one we decided on was  when the leaflet "Men are from Mars, Women are from Venus" was shoved into our hands. We thought it may be some sort of comedy take on the book.  As you may have guessed from my earlier comment, this wasn't quite the case.  We did learn that the guy has to look after his lady like she was a garden, needing constant attention, and the lady has to look after her man like he was a dolphin.  And feed him fish!
This has been a source of jokes between us all ever since. 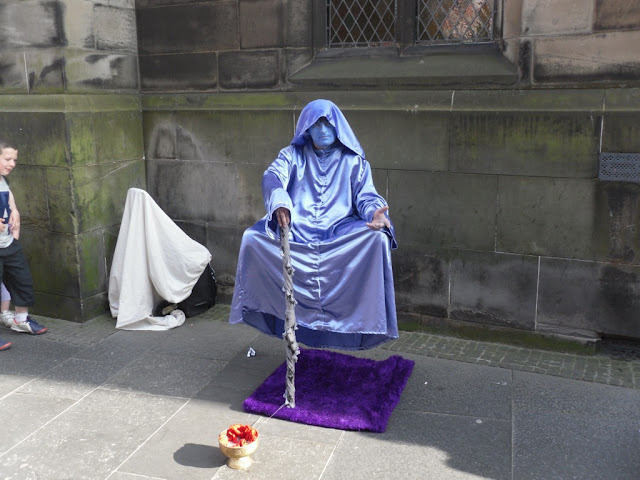 On the way to the second show of the day, we finally got to hear some bagpipes.  The band busking at the roadside was made up of an electric guitar, a drum set, and a piper.  It was brilliant to hear those pipes playing alongside more modern instruments, playing modern tunes, and sounding awesome. But we couldn't stay long to listen.  We had to get to our next venue, which was to see Jo Caulfield at The Stand.  Absolutely amazingly brilliant.  We had tears running down our faces, we laughed so much.  I am so glad we managed to get tickets for that. I'd very happily pay again and go listen to her all over again. Really really good. 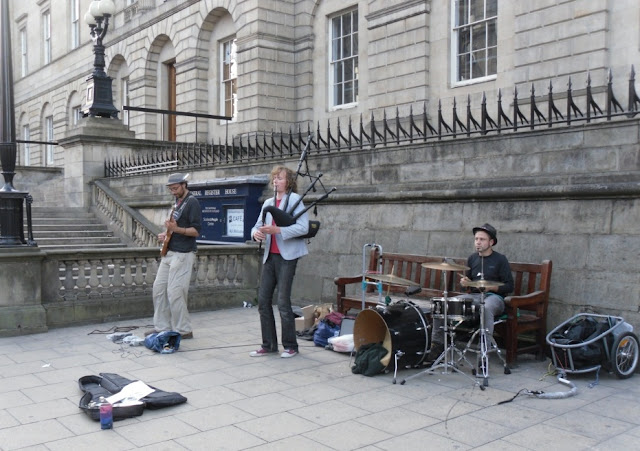 And finally, feeling very satisfied with having had such a brilliant day, it was time to get the train back to Livingston.  A special note should be made here in the form of a thank you to my mate Jenny, who, bless her cotton socks, cannot help herself, she has to organise everything, even when it doesn't need organising.  It's a flaming good job she does though, cos otherwise we wouldn't have got tickets, or anywhere on time, and definitely wouldn't have managed to get one of the best tables in the club to watch Jo Caulfield.