Can I get to Penhill from Aysgarth?

I’d looked at the maps loads of times and wondered if a walk could be made up. Well I did manage one. Sort of. With hindsight, I could have come up with a better route, and I’ll know better next time. But this is about today's walk..
I met up with Yvonne and Ayesgarth Falls car park. We set off over the bridge past the Aysgarth High Force and the Old Mill on the other side. A fantastic start to the day. 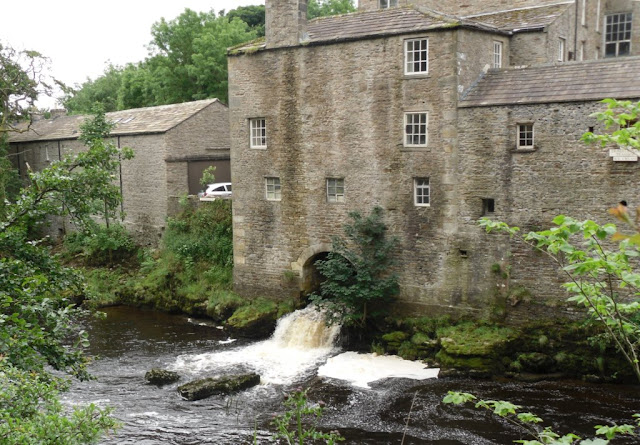 The walk we'd planned is lovely. Through the fields, past the drying hay, through fields of sheep and fields of cows………. 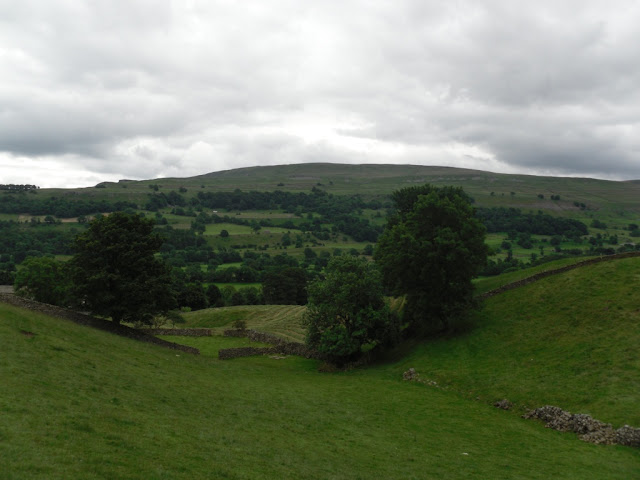 Oh oh!  Did I say cows?  Cows can be scary. Mostly because they are bigger than us and a herd of them could gang up and chase us out of their field. (Unlikely, but it has happened), most walkers treat cows with trepidation..
But these cows didn’t really count as cows - they were only half as big as they should be. But that was more than big enough for Yvonne, who got nervous. “They’re following us!” she hissed, as she kept me between them and her. But the calves were just curious, following to see what we were doing and if we would feed them. To be honest they were quite sweet. Give them a few months though, and I think the story might be different.
We carried on, over the beck and through another field to be “greeted” by a pair of Oyster Catchers. Hmmmm, maybe “shouted at” is a better term. They were obviously trying to tell us something, like “gerrof my land”. They screeched, very loudly and very constantly at us. The sound was amplified around the valley to the point of almost hurting our ears. It didn’t stop until we got to the gate at the end of the field. I suffered it long enough to get some pictures though. Odd birds. 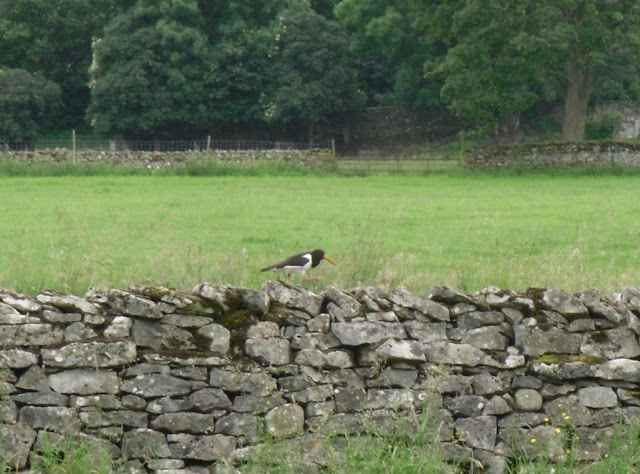 We quickly reached West Burton and admired the falls, which are always lovely. We both enjoyed the sound as much as the sight of the rushing water. It would be so easy to sit there all day despite the drizzle. 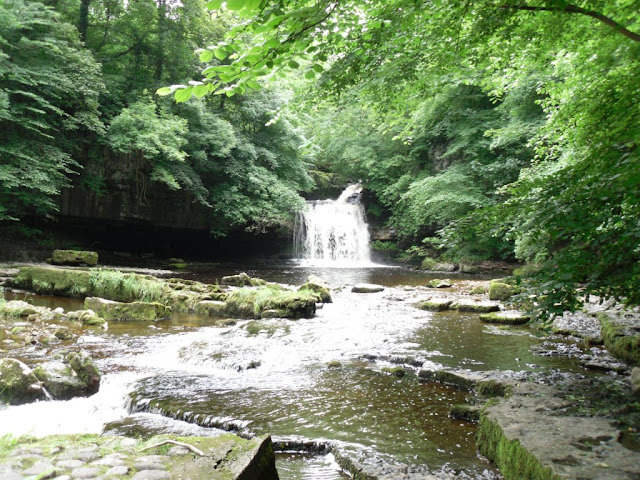 Chatting away, we followed the gentle slope up Morpeth Gate onto the farm track heading for Witton Steeps. 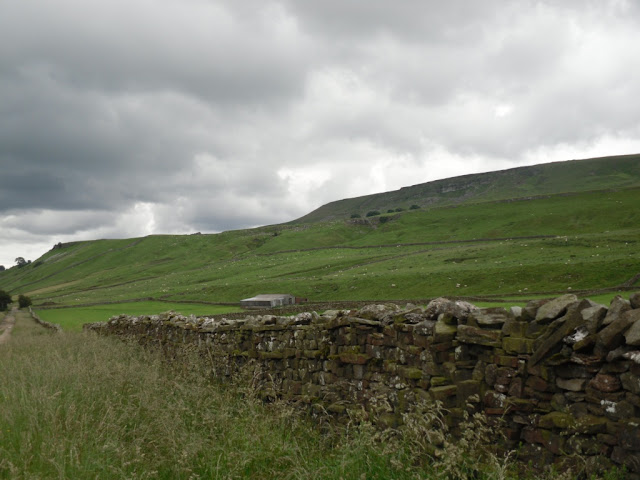 It was then the next fingerpost right and aim for the slope between Penhill and Black Hill Scars to get to the top of Penhill. There seem to be loads of paths up, but the obvious one follows a zig zagging gulley. Bits of this were quite steep, and we took several breather breaks on the way. And then we were up. It was very rewarding to hear Yvonne's “Oh Wow!” as she looked around. As I’ve said before, Penhill is not a very big hill, but because it stands out on its own you can see for miles. Looking North East, we could see the industrial chimneys of Middlesborough, Wensleydale and Coverdale were on either side of us, and all the hills of the Dales were behind. 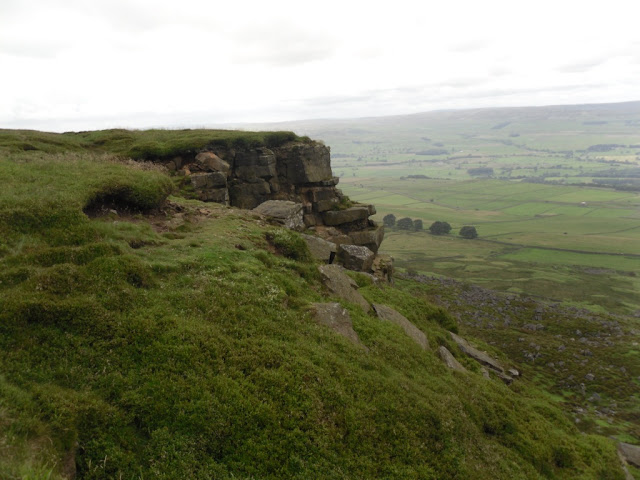 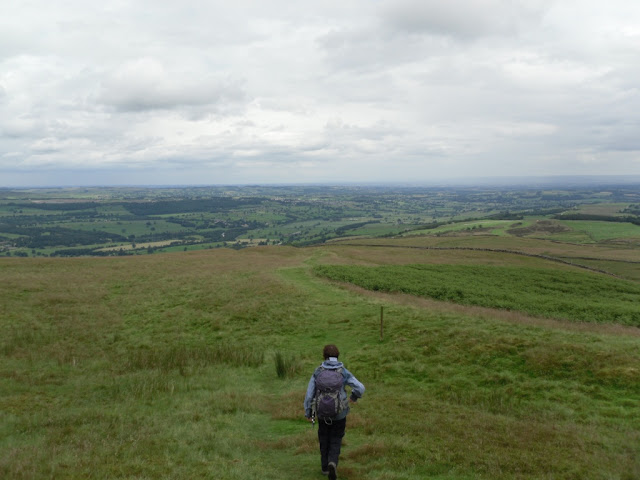 We sat in the shelter of the beacon and watched a group of ponies play tig in the field below us as we ate our lunch. We were enjoying the scenery so much, we forgot to take photos, so I’ve added one from a previous walk. 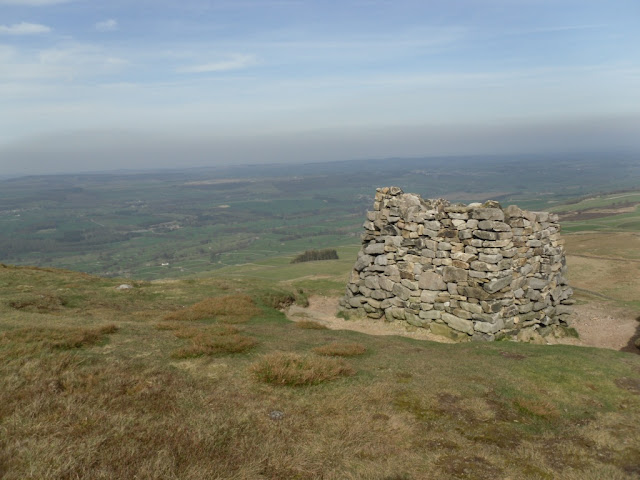 So now it was time to go down. Like everyone before us, we took the most direct route straight down the slope in front of us, through the fields, this time with ponies, sheep and more cows, (but they stayed away from us), until we got to the road leading from West Witton to Melmerby. 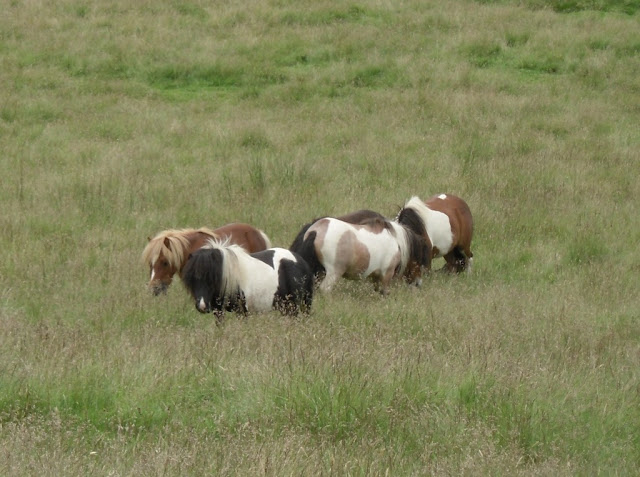 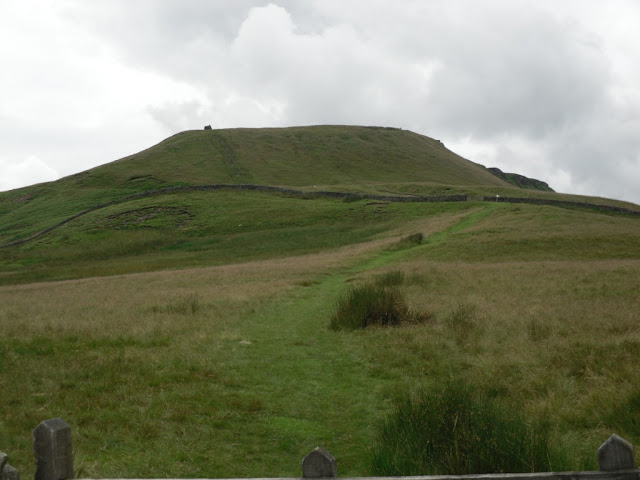 A couple of lefts and we were back on the farm track we’d walked along earlier, but further up. The intention was to follow it until a right turn that would lead us down to Templar farm, but we missed the track, mostly because it wasn’t marked as a footpath/bridleway I think. But the sun had come out so it didn’t matter. We got some lovely views of the Dales, and a photo of Bolton Castle in the distance. 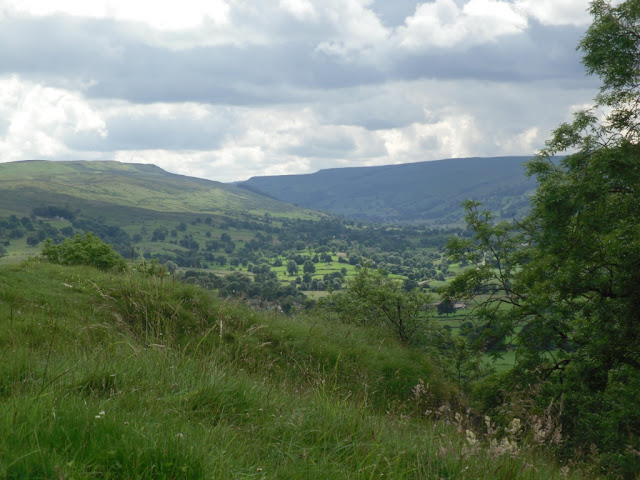 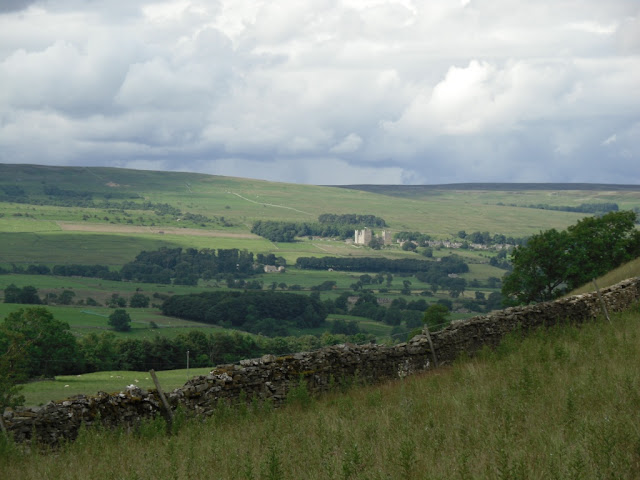 We got back to Morpeth Gate again decided back track to our intended route by walking along Spring Bank to the remains of the Knights Templar Preceptory. This place always conjures up romantic images for me. I think of Indiana Jones, where the Knights guarded the Holy Grail, and other stories. Reading up on them, I found out they were a very real order of fighting Christian Knights who gave up their wealth and fought for the Catholic Church during the Crusades. A whole religious sect grew up around them until the reigning orders of the time (in debt to them), realised how powerful they were and turned viciously against them, charging them with crimes from fraud to heresy. Despite the Popes attempts to protect them, many were executed until they were disbanded 1314, 200 years after the Poor Knights of Christ and the Temple of Solomon were first set up to protect Pilgrims on route to Jerusalem. Wiki - Knights Templar & A bit more of their history
So, as I said, this place always interests me. As a Preceptory, it would have been a headquarters of the local group. Apparently, there is more under the grassy tussocks, which explains why the bit we can see is very small. 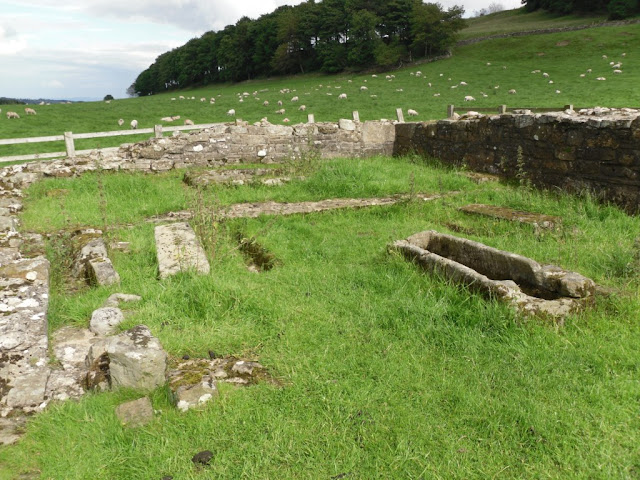 So, now we’re back on track, it’s down to Temple Farm. Passing it we found more mud than on any other walk I have ever been on. As we tried to find a way through, it became obvious that there wasn’t one (not from where I was standing anyway – Yvonne found a drier place). So I just splodged through the ankle deep water logged mess hoping my boots would hold out. They didn’t quite. Smelly wet socks. Eeeugh!
A bit a road walking, then down to River Ure to walk along the South Bank back to Ayesgarth. The river is just wonderful here, but by now we were pretty tired, (we’d added a couple of miles during our detour), and any intention of visiting the waterfalls from the North bank had been worn away from our weary minds as we finally reached the car park. 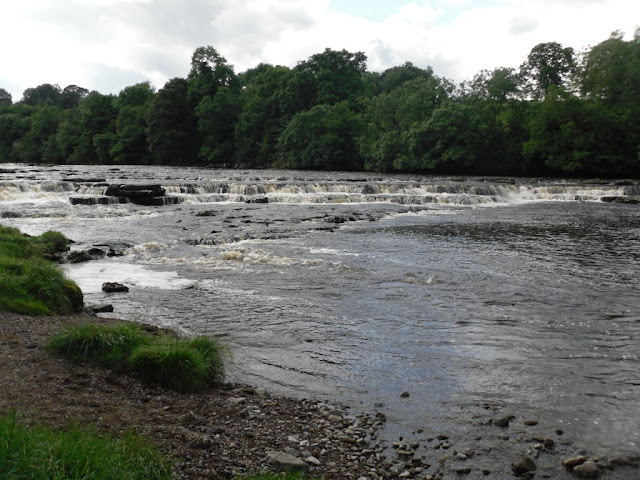 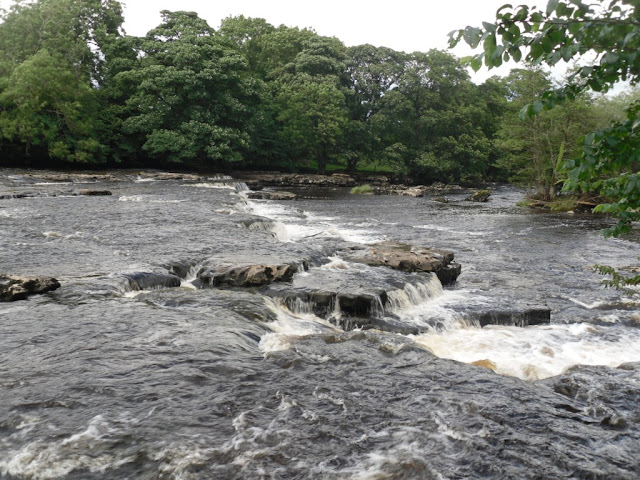 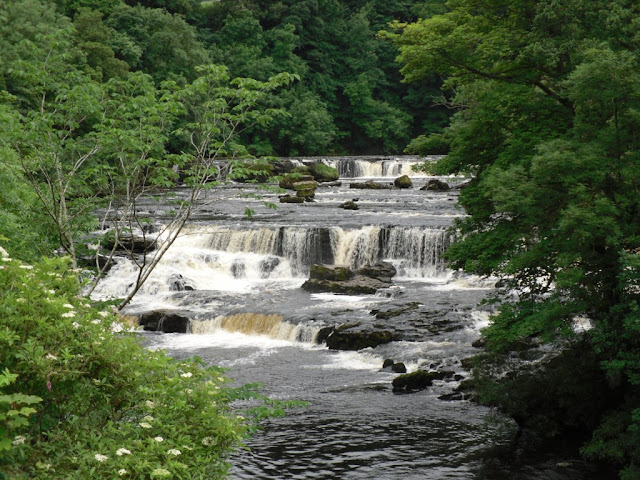 Turns out we’d walked 13 miles and taken about 7 ½ hours to do it. We did stop a lot though, and the GPS tracked us at about 2.3 miles an hour when we were actually walking, so we didn’t do that badly.
So that’s the furthest in distance that I’ve ever walked. Pleased with that. And the walk, but next time I’ll investigate a better route. Once again thank you to Yvonne for being very excellent company.