Bolton Priory, a waterfall and more heather than planned.

As usual, the weather forecast was one of the determining factors when we were trying to work out where to walk, and as it happened, Bolton Priory was in the dry zone. Since I've always wanted to have a closer look at the Priory ever since I saw it during a walk along The Strid a couple of years ago it was easy to use it as a starting point for a walk.

To visit Bolton Priory is free, but it costs £4 to park in the Priory car park.  Canny eh?  But not a problem, I realised we'd probably got our money's worth when I saw the deep the muddy grooves our campervan had made in the grass as we parked.  [Sneaky chuckle].
Paid and parked we started on our planned 8 mile walk by crossing the road over to the Bolton Priory site. Then we stopped walking and had a wander around the Priory ruins. 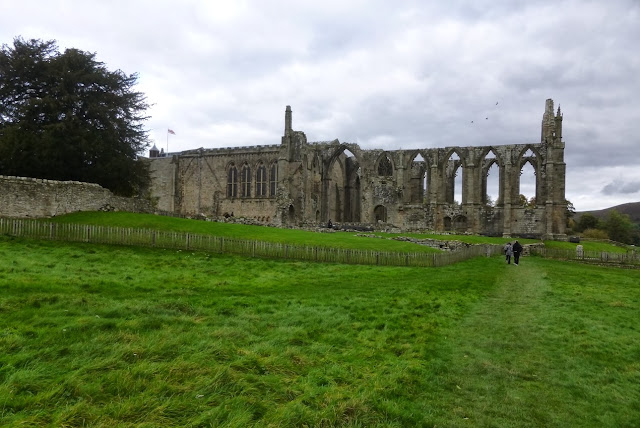 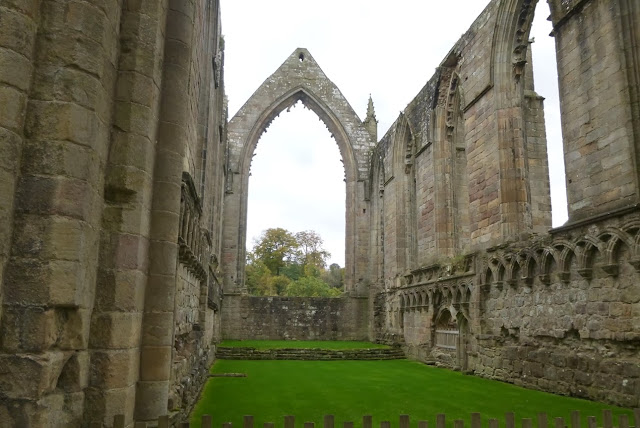 I found it quite fascinating that half the priory was a ruin, and the other half was being used as a church.  We would have wandered into the church for a look, but there was a wedding on.   I looked, but I'm pretty sure they weren't gonna let us in.

Having sated our appetite for the old masonry and roofless buildings, we had another go at starting our walk.  First we crossed the River Wharfe, using the conveniently provided bridge.
On the east side of the river, we followed the Dales Way north(ish), enjoying the the autumn colours and the occasional burst of sunshine. 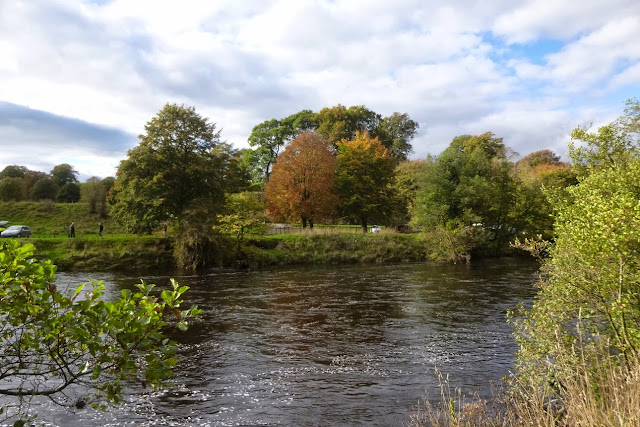 At Posforth Bridge, we turned off to follow a track into The Valley of Desolation.   All the trees got blown down here in a terrible storm in 1826, making the little valley very desolate, (that's how it got its name see), 'cept it's not very desolate really, because it's been a long time since 1826 and all the trees have grown back.

I really liked this fungus in the next picture. Then I found out it's called "Many Zoned Polypore". What kind of name is that!   It sounds like an architects design for a shopping centre, or a plastic carrier bag with pockets.  This fungus needs a better name. Trouble is, I can't think of any. Suggestions in the comments section please. 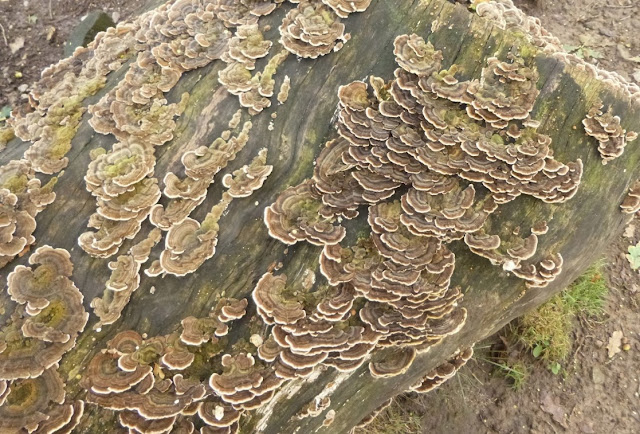 There's an unnamed waterfall on Sheepshaw Beck.  We'd heard it last time we walked this way, and, just to prove that sometimes we actually make wise decisions, we decided to divert and go take a look. 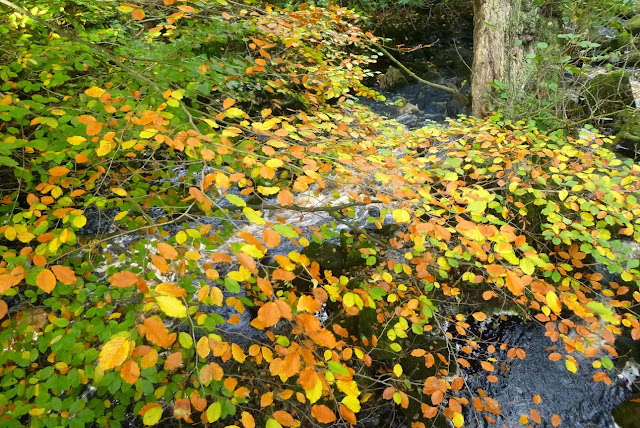 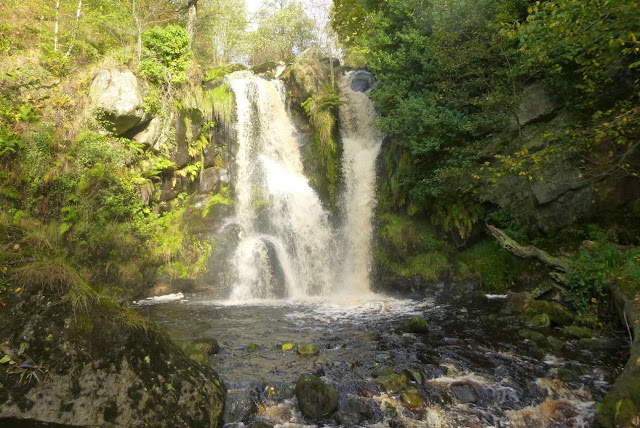 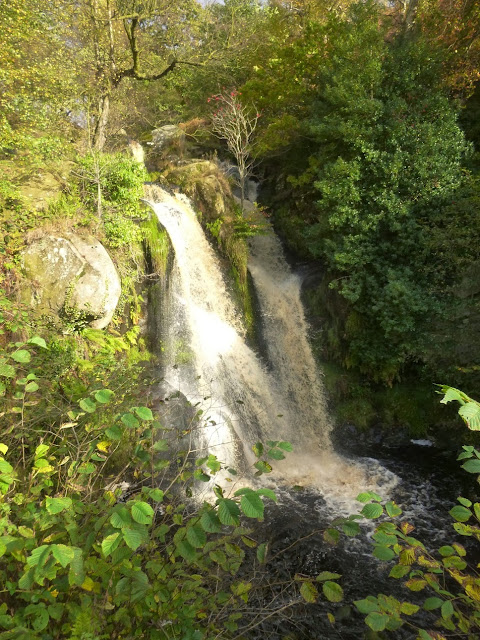 What a stunning little fall, I'll swear I saw a fish in it.  The fish looked like it was trying to jump the falls, in the way I've seen the salmon do it on TV.  But then it could have been the fish was being washed over the falls, and was facing the wrong way.    I kept looking, but I didn't see another fish.


We sat and had our lunch here, in a glade in the wood overlooking the waterfall. The sun came out and kept us company for half an hour too.  How nice.

After the valley of desolation, we were supposed to walk through the managed forest and then take a right turn to Agill House and follow the track to Broadshaw.  But we missed the turning, and we didn't know we'd missed the turning until we took the wrong one and ended up on something that looked like a path, but turned out to be very definitely not a path. Gizmo (the GPS), couldn't help cos he'd been given a different route
Our difficult but very interesting detour following a wall around the moor. Fortunately the scenery was wonderful, so it sort of made up for trying to find our way through boggy marsh and untrod heather 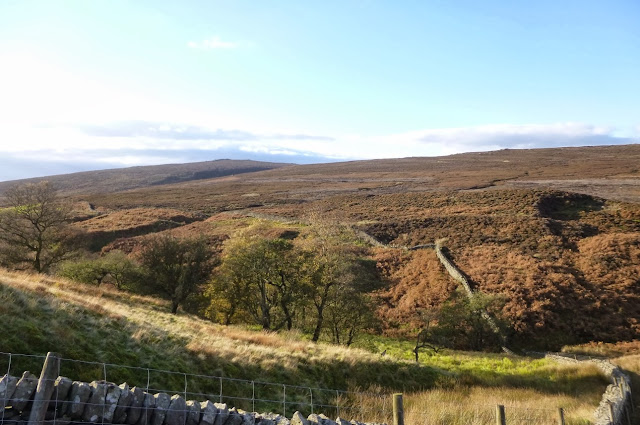 Peter was getting cross, because he could see where he wanted to be - i.e. that path in the distance but there was a massive great wall in the way and no path on the other side of it.  We kept following the wall until eventually we found a track, which led to a gate, which led to another track and finally.... Voila! We were back on course at Broadshawe.
It didn't take us long to walk from Broadshawe back to the Wharfe at Stead Dike.  We crossed the bridge there, so that we could walk on the west side, downriver and back to the Priory.  We saw a sign for the Stepping Stones and wondered where they were, as we'd not seen them on the way up.  Then there was another Stepping Stones sign, but for the life of us, we couldn't work out where they were.  We decided they must be further downriver, something to bear in mind next time we came this way.
Back at the Priory, the church was open, and no one else was getting married so we popped in to have a look. 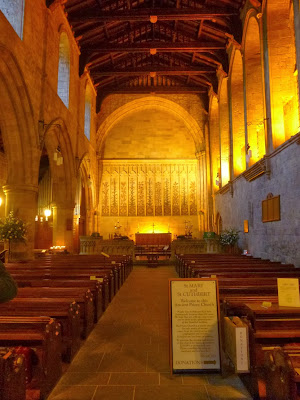 It was odd inside, because there wasn't a big stained glass over the altar end.  The wall separating the ruined part of the Priory from this church wouldn't have been there before, and the Nave would have continued on into the Choir and the Chancel. 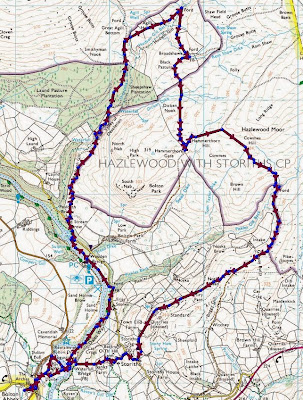 And then it was back to the van where we changed out of our boots, felt ever so slightly guilty about the dents in the ground and set off for home.  We'd walked 7 1/2 miles and 1300 ft of up, so not a difficult walk.  (Unless you take a detour through the heather).

Here's a map of the intended route:

Later on we were looking at the photo's.  Take a look at this one again: 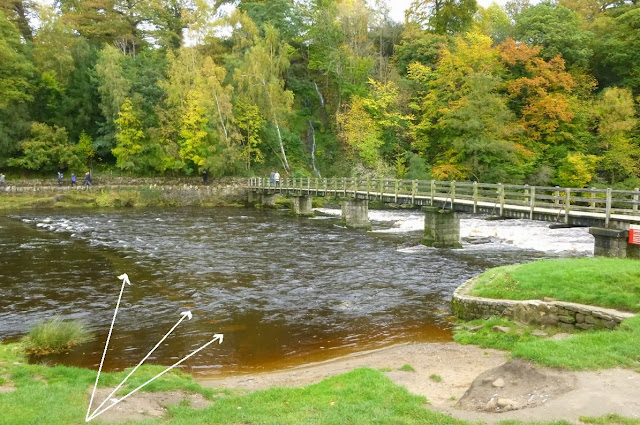 Now we know where the Stepping Stones are!